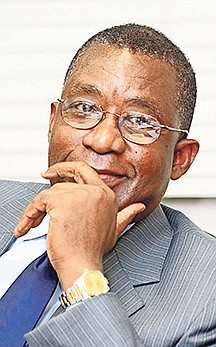 A Bahamas Petroleum Company (BPC) director yesterday argued that “pressure groups” cannot dictate to a sovereign nation whether it should seek out and exploit its natural resources.

IMF calls for austerity in the ‘hundreds of millions’

The International Monetary Fund (IMF) yesterday exposed the harsh austerity Bahamians face post-COVID by urging the government to increase its “net income” by more than $300m over four years.

A former finance minister is warning that The Bahamas' $400m foreign currency deficit could be the start of "a quite worrisome trend", and added: "We're running out of options."

A Bahamas Petroleum Company (BPC) director yesterday blasted "the frightening lengths" that oil exploration opponents will go to demean its project, as he branded their resistance "futile".

A Bahamas Petroleum Company (BPC) director yesterday slammed "preposterous" environmental activists for seeking to block this nation from discovering whether it has natural resources to exploit.

The International Monetary Fund (IMF) yesterday dampened The Bahamas' prospects of a swift rebound from COVID-19 by slashing this nation's projected 2021 economic growth to 4.6 per cent.

COVID-19 is "the worst time" for The Bahamas to consider full dollarisation, an ex-finance minister said yesterday, arguing there were better options for attracting mass foreign currency inflows.

The Bahamas needs an “extraordinary economic shot in the arm” to meet the International Monetary Fund’s (IMF) targets, an ex-finance minister said yesterday, as hitting them would be comparable to “beating Usain Bolt”.James Smith, also an ex-Central

A former finance minister yesterday backed the government’s move to obtain a $252m “emergency” loan from the International Monetary Fund (IMF) as “a very prudent and logical thing to do”.James Smith, who held the post during the first Christie admini

B$ devaluation 'not on horizon'

Devaluation of the Bahamian dollar “is not on the horizon at all”, a former Central Bank governor said yesterday, adding that the country’s all-important foreign reserves have several protective mechanisms around them. James Smith, also a former fin

A former finance minister fears The Bahamas could be “in really dangerous territory” by June 2021 with a national debt that is equal to the size of its economy. James Smith, pictured , who held the post under the first Christie administration, told

'Worst ever mistake' for inflated reserves

A former finance minister yesterday argued that The Bahamas stood on the threshold of another recession with the coronavirus likely “to knock a few more points of our GDP”. James Smith, pictured , also an ex-Central Bank governor, told Tribune Busin

New doubts emerge over $975m loans offer from US company

FORMER Central Bank Governor James Smith said it is unlikely the government will seek access to $975 million in loans a US-based company pledged during a conference on Monday to raise funds for Hurricane Dorian recovery.

Bahamas ‘too profitable’ for an RBC exit

A former finance minister yesterday voiced optimism that The Bahamas is “too profitable” for Royal Bank (RBC) and its Canadian rivals to abandon following their eastern Caribbean exit.

CIBC deal positive if 'breaks up the cartel'

An ex-Central Bank governor yesterday said the proposed acquisition of CIBC FirstCaribbean could be positive for the Bahamian economy if it “breaks up the cartel” in the banking industry.James Smith, pictured, told Tribune Business that the Colombia-