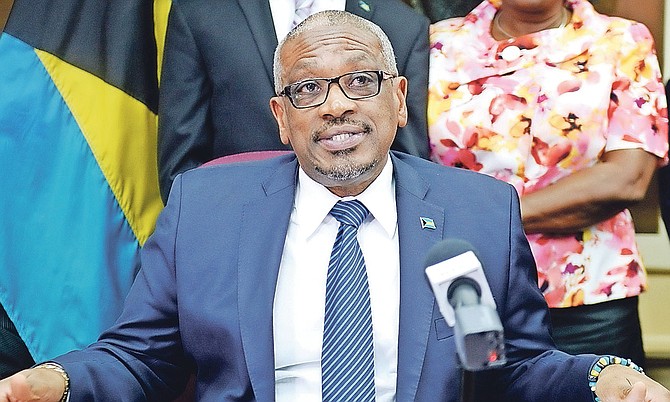 THE Prime Minister’s Delivery Unit and other departments are expected to travel to Singapore to determine how best to modernise and streamline government projects and policies.Prime Minister Dr Hubert Minnis said he has already had communications wit

PRIME Minister Dr Hubert Minnis said it appears the Progressive Liberal Party is playing the race card when it comes to Sir Roland Symonette’s posthumous award of National Hero but implored Bahamians to move beyond skin colour when discussions focus on the contributions made toward nation building.

AS the nation shudders from the shock of the 12 percent value added tax rate, Prime Minister Dr Hubert Minnis reportedly told a Cabinet minister it is “better to lose an election than to lose a country.”

Tackling crime in our neighbourhoods

PM’s blueprint to save Over-the-Hill

PRIME Minister Dr Hubert Minnis yesterday tabled the long awaited Over-the-Hill White Paper 2018, unveiling his administration’s proposed plans for impoverished communities, which include a variety of tax concessions, an action plan for physical rejuvenation along with social and economic empowerment.

PRIME Minister Dr Hubert Minnis yesterday said he was not worried about losing political capital due to his delay in appointing a substantive chief justice, adding that his actions – or lack thereof – were totally supported by the Constitution.

THE Minnis administration’s popularity is waning, with fewer than 50 per cent of Bahamians generally satisfied with its performance, according to a new poll from marketing and research firm Public Domain.

One month shy of the current administration wrapping up its first year in government and thus far, there have been few surprises. Many of his critics saw Dr Minnis as ineffective in his capacity as Opposition Leader, both inside his party and the public sphere. Somehow though, he was able to scrape by, barely maintaining control of a party that was miraculously able to galvanise itself at the eleventh hour and win an election that was theirs to lose.

PRIME Minister Dr Hubert Minnis was silent yesterday when faced with questions about why he has not appointed a substantive chief justice even as one of his own Cabinet ministers has criticised him over his failure to assign someone to that role.