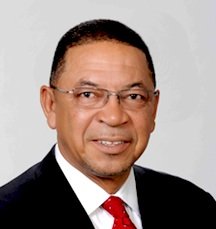 MEMBERS of Parliament clashed in the House of Assembly yesterday over allegations St Anne’s MP Hubert Chipman made in a letter to House Speaker Dr Kendal Major in which he claimed that the draft order for constituency boundaries that was tabled last week differed significantly from the report he signed as the Official Opposition’s representative on the Constituencies Commission.

ST ANNE’S MP Hubert Chipman said yesterday he is considering running as an Independent candidate in that constituency, claiming that campaigning on the Free National Movement’s ticket in view of his vote of no confidence in party leader Dr Hubert Minnis is “not an option”.

POINTING to the “vague” language in the party’s constitution, St Anne’s MP Hubert Chipman yesterday said he hoped the disciplinary proceedings launched by the Free National Movement against him and his parliamentary colleagues would not become a “kangaroo court”.

ST ANNE’S MP Hubert Chipman admitted yesterday to being disappointed that he was not informed by the Free National Movement that hurricane relief efforts had been organised by the government and that supplies were issued to constituencies.

Calls for Chipman to run as independent

SOME residents of the St Anne’s constituency are unsettled by the Free National Movement’s (FMN) decision not to renominate Hubert Chipman in the area and some have started urging Mr Chipman to run as an independent candidate.

Chipman out of election race, says leader doesn’t want him

ST ANNE’S MP Hubert Chipman announced yesterday that he has withdrawn his name from consideration for renomination in his constituency, saying it is clear FNM Leader Dr Hubert Minnis no longer wants his contribution.

Chipman post uncertain while FNM use seat as ‘bait’

AS the Free National Movement continues efforts to fortify its base ahead of the 2017 general election, there is some uncertainty over the future of St Anne’s MP Hubert Chipman, as the FNM is said to be using the “sure seat” as bait to attract a “financially capable” candidate to its ranks.

ST ANNE’S MP Hubert Chipman said yesterday that he would finally table the long-awaited Urban Renewal report completed by the Public Accounts Committee at the next sitting of the House of Assembly.

ST ANNE’S MP Hubert Chipman said yesterday he supports FNM Leader Dr Hubert Minnis “100 per cent” and the party is investigating who leaked confidential emails between himself, other members of the FNM and Dr Minnis to the press.

FREE National Movement MP Hubert Chipman expressed concern yesterday about allegations that some members of the party have been intimately involved with Save the Bays in its alleged efforts to “destabilise the government” using money received from foreigners.

PUBLIC Accounts Committee Chairman Hubert Chipman has said the group’s investigation into Urban Renewal 2.0 revealed that the programme is no different from any other government entity where “there are things that need to be fixed”.

Chipman asks if borders are secure amid global terror alerts

IN the face of global terrorism concerns, St Anne’s MP Hubert Chipman yesterday urged the government to explain what it is doing to secure the country’s borders.

THE missing resources from the Department of Road Traffic’s Abaco office valued at $662,705 will be investigated by the Public Accounts Committee once it receives the auditor general’s report which uncovered the unaccounted for materials, according to PAC Chairman Hubert Chipman yesterday.

PUBLIC Accounts Committee Chairman Hubert Chipman said yesterday that the PAC will continue to interview Urban Renewal 2.0 officials on Thursday as it eyes an end to weeks of hearing testimony centred on the programme’s operations.

Urban Renewal co-chairs have no responsibility for funds

PUBLIC Accounts Committee Chairman Hubert Chipman said after hearing testimony from the co-chairs of Urban Renewal 2.0 yesterday, it is clear that the programme is “disjointed.”

ST ANNE’S MP Hubert Chipman yesterday said he had every intention of running in the 2017 general election as he shrugged off reports that he had fallen out of favour with FNM Leader Dr Hubert Minnis.

PAC Chairman 'has had no indication' on BAMSI hearing

PUBLIC Accounts Committee (PAC) Chairman Hubert Chipman has said he has no clear indication when the committee will delve into matters related to the Bahamas Agriculture and Marine Science Institute (BAMSI).

THE United States’ recent decision to open an embassy in Cuba will have a “major impact” on the Bahamas from a tourism standpoint, according to St Anne’s MP Hubert Chipman, who added that the Bahamas will now have to “do better with our services in order to attract more people into this country”.

PUBLIC Accounts Committee chairman Hubert Chipman said he was “angered” that the PAC remained at a “disgusting” stalemate regarding its probe of Urban Renewal’s operations as he suggested that House Speaker Dr Kendal had prevented the work from progressing.

Chipman hits out at lack of accountability

PUBLIC Accounts Committee Chairman Hubert Chipman said the official opposition is beset with a “looming crisis of confidence” springing from what it believes to be a wide-scale “lack of accountability and transparency” in the Christie administration.

THE public hearing on matters related to the Bahamas Agriculture and Marine Science Institute will not come until after the 2015/2016 budget presentation as it still awaits financial clearance from the Ministry of Finance, according to St Anne’s MP Hubert Chipman yesterday.

Chipman says immigration policy will be 'ineffective' without legislation

THE shadow minister for immigration, Hubert Chipman, claimed this week that the government's new immigration policy will "prove ineffective" due to a lack of legislation.

Naturalisation backed for children born in the Bahamas to Haitians

OPPOSITION Shadow Minister of Foreign Affairs Hubert Chipman is a “firm believer” in naturalising children born in the Bahamas to Haitian parents with the St Annes MP telling Haitian President Michel Martelly yesterday that the issue is something the Free National Movement would have to address if it is returned to power.

'When will nation know if it is victim of spying?'

HUBERT Chipman, FNM Shadow Minister for Foreign Affairs, said he is curious as to when The Bahamas will get an answer, if any, on the alleged recording of cellphone conversations by the US National Security Agency (NSA).

THE FNM said yesterday that it found it “most unfortunate and highly inappropriate” that Foreign Affairs Minister Fred Mitchell would elevate “unscripted remarks” by its leader to the level of diplomatic correspondence with the countries affected by the loss of Malaysian Flight 370.

Chipman questions the competence of Mitchell

THE competency of Foreign Affairs Minister Fred Mitchell has been called into question by Hubert Chipman, Opposition Shadow Minister for Foreign Affairs, over the decision to lease extra accommodations in Washington, DC, for a consulate general’s office.

HUBERT Chipman, Opposition MP and Shadow Minister for Immigration, said yesterday that the government should apologise to Bahamians who were profiled during a random identification check on the Eastern Road yesterday morning.

THE FNM is “not satisfied” that a loss of confidence in the Bahamas’ commitment to human rights is limited to activists in South Florida – despite assertions by Foreign Affairs and Immigration Minister Fred Mitchell, St Anne’s MP Hubert Chipman said yesterday.

Press turned away from detention centre

THE IMMIGRATION department barred the press from touring the Carmichael Road Detention Centre with an opposition MP yesterday – despite admitting that the proper application process had been followed.

AMID allegations of abuse at the Carmichael Road detention centre and a call by United States government officials for an investigation, Shadow Minister of Foreign Affairs Hubert Chipman said he may visit the centre today for a “first hand look”.

Chipman claims Rahming will be 'swapped out' of DC post

ST ANNE’S MP Hubert Chipman yesterday blasted the government for its management of the foreign service and handling of diplomatic appointments.

FNM MP for St Annes, Hubert Chipman said yesterday the country’s debt will rise to $5.5 billion – one billion of which was borrowed by the PLP in less than two years.

More than $1bn borrowed in a year

WHILE the FNM has been criticised for allegedly spending too much money, they yesterday hit out at the PLP government for borrowing in excess of $1 billion since they took office more than one year ago.

ST ANNE’S MP Hubert Chipman said the government must “come clean” and explain to the public why exactly some of the country’s diplomatic appointments to the United States have not yet been confirmed.