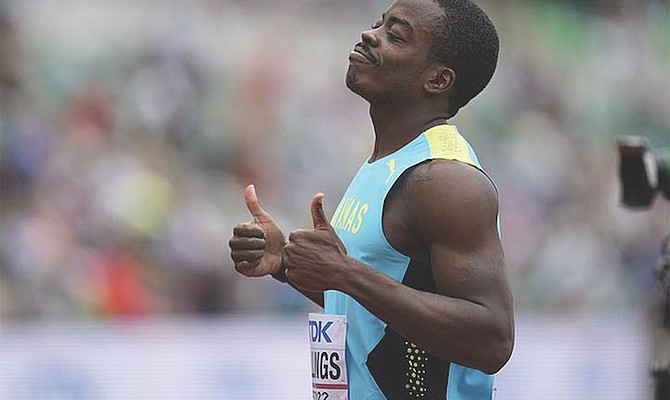 A move to Illinois on January 1 to continue his training has already paid off big dividends for Bahamian national decathlon record holder Ken Mullings.

THE Discount Distributors Liquors Rockets and the Produce Express both had a big night on Saturday at the AF Adderley Gymnasium as the New Providence Basketball Association continued its regular season.

WHILE Robynn Rolle-Curry inked her name on another record-breaking performance on the track, Charisma Taylor soared high to victory in the women’s triple jump on the field as the duo led a list of Bahamians in action over the weekend for their respective colleges and universities.

THE Atlantis Basketball League’s 2023 official launch is set for February 6 at 6:30pm when there will be an opening ceremony at The Betty Cole Park. All games are open to the public and Atlantis staff for the entire season which ends April 28. Games will be held every Monday, Wednesday and Friday at 6:30pm for the first game and 9:30pm for the final game of the day.

IN preparation for their basketball tournament that will start today at the Kendal Isaacs Gymnasium, the New Providence Publics Primary School Sports Association hosted a two-day certification course.

IT wasn’t the performance he anticipated, but Cameron Riley said he was thrilled to have been afforded the opportunity to participate in his first Korn Ferry tournament.

Veteran marathoner Ebbie Jackson wants to do all she can to help raise funds to assist those dealing with cancer.

ALTHOUGH she just started competing in the 400 metres when she joined the Dragons track team at Minnesota State University at Moorhead in Minnesota, Robynn Rolle- Curry has excelled as one of the top contenders in the USTFCCCA.

Pat Strachan backs call for Elisha Obed to be honoured

A GROUP from the stock exchange and small businesses, including Sawyers Studios, Arawak X and Tropical Gyros, stepped forth on Wednesday to pledge their sponsorship of the 50th Carifta Games.

THE following games were played at The Hope Center on University Commons on Tuesday.

NM Valentine Cox dominated the 2023 Bahamas National Chess Championship, winning the prestigious event with an impressive 8 out of 9 points.

BAHAMAS Hope Challenge (BHC) returns to Eleuthera from 10 to 12 March for its annual fundraiser with the goal of adding to the more than $4 million it has raised toward fighting cancer in The Bahamas over the past 17 years.