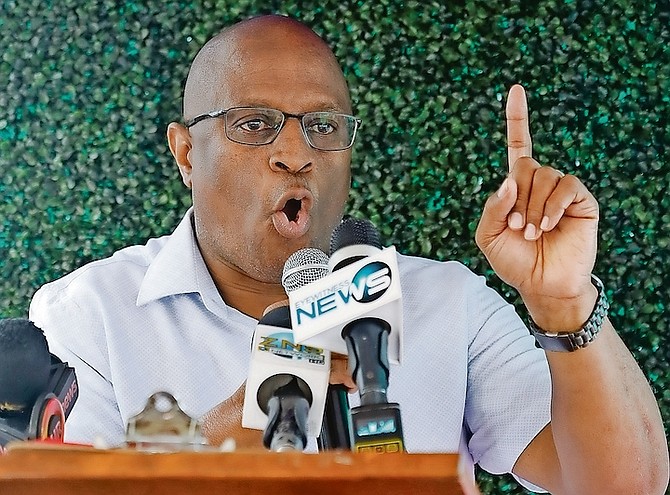 FREE National Movement leader Michael Pintard has called on Prime Minister Phillip “Brave” Davis to consider shuffling his Cabinet, saying it is quite evident that several ministers are unsuitable for their portfolios and should be reassigned to roles better suited to their skills or replaced entirely.

Topping the list, he said, is Works and Utilities Minister Alfred Sears and Housing and Transport Minister Jobeth Coleby- Davis who, he said, needed to be removed from their ministerial posts effective immediately.

The FNM leader also expressed concerns about Grand Bahama Minister Ginger Moxey’s performance in office, saying he believed she should serve the country in a different capacity.

“Yes, there are several ministers that seem to be in conflict (with) their previous occupation and how that intersects with the ministry that they now oversee,” Mr Pintard told The Tribune yesterday.

“I believe that is a reflection on the effective management of the prime minister. He has been ineffective in managing various ministries. He has had to intervene in multiple ministries to hit the reset button for various ministers.”

Mr Pintard also said reassigning ministers to different posts would only be effective if the prime minister gives more focused attention to “domestic matters” and better manages the ministries at hand.

He especially zeroed in on Minister Sears, who he said lacks “bold, honest and effective leadership”.

“He has (on) no less than eight occasions been untruthful to both the Parliament and to the general public when questioned and, therefore, he has a fundamental credibility issue, and he has only confessed when the public was presented with unreachable evidence,” he claimed.

Mr Sears had initially denied that he was briefed on BPL’s fuel hedging controversy, but later admitted that he in fact was aware of the recommendations made to hedge oil prices in advance of the BPL surcharge increase last year for consumers.

The FNM leader also rehashed concerns about the deteriorating state of roads in the capital and pointed to such missed deadlines as the Village Road project.

He said the minister does not appear to be on the same page with the ministry’s technical team, adding “there appears to be a lack of coordination between him and those other utility companies that need to use the same space where roads are being paved.”

“There are members of his own caucus who are tremendously angry because the performance of the ministry which he has oversight cannot seem to complete works that are affecting their constituents and by extension, their fortunes as members of Parliament,” Mr Pintard said.

He conceded that Mr Sears was experiencing multiple challenges in his ministry and said while the opposition is grateful for national contributions he made in the past, they believe that he needs to resign.

“To reshuffle him is an attempt to deceive, I believe, an insightful public who really wants bold, honest and effective leadership,” he added.

“And unfortunately, Minister Sears, who in my view has historically been a voice that we have valued in the country, I think he has now hit that point of diminishing returns and no day that he stays longer, he is going to, I think, recover the kind of promise that he has shown.”

With respect to Mrs Coleby-Davis, Mr Pintard said there’s no doubt that she also needs to be fired.

He said in addition to her showing a “spirit” of arrogance since being elected, he claimed she has also not followed the law with regard to several processes.

This, he said, was evident when she issued hundreds of taxi plates without gazetting the candidates among other things.

He also accused her of allegedly violating the law by failing to disclose the details surrounding the awarding of housing contracts and a $20m loan she secured for her ministry’s projects.

As for Ms Moxey, the opposition leader said while the minister showed much promise, the party believed a more experienced person would do better in the role.

He said there is a perception by many companies on the island that Ms Moxey “is an extension of the Grand Bahama Port Authority,” because she once served as GBPA’s vice president.

“We believe that obviously she has some promise, but certainly Grand Bahama is a very complex island and it requires a stature of leadership that presently is not there,” he added.

“We know the Ministry of Tourism has gone out of its way to try and shore up the Ministry of Grand Bahama in order to close on some of the huge initiatives, particularly the hotel and to get the airport moving, etc.

“But we certainly believe that there has to be a minister with previous Cabinet experience or greater gravitas in terms of managing what is going on in Grand Bahama. There is tremendous outcry in Grand Bahama at that moment.”

He said it is also apparent that the prime minister is not “suitably utilising” certain ministers, such as Minister of Environment and Natural Resources Vaughn Miller, and State Minister for Environment Basil Mcintosh.

“Neither of them travelled to Cop27 recently and so they appear to not be in the epicentre of a number of the things that he (the prime minister) is doing in that ministry,” he also said.

It is not unusual for a prime minister to reassign roles to ministers in their Cabinet after assuming office.

He said at the time that the decision did not mean that he had lost faith in any of his ministers, but rather to give them more exposure.

Prime Minister Davis, however, has given no indication that he is planning to shuffle his Cabinet.

Mr pintard is a comedian

The RedParty's Michael Pintard is on a mission force which amongst them PLP's most check boxes be the Republican's George Santos finally confessing to dressing in drag.

Just be careful where you stick that finger, ---- Yes?

The Minister of Finance should be the first to lose his post. Using the people's money as a slush fund.... is UNFORGIVABLE at best. But corruption here was perfected by this party and the PM has been a part of this party for a very long time.