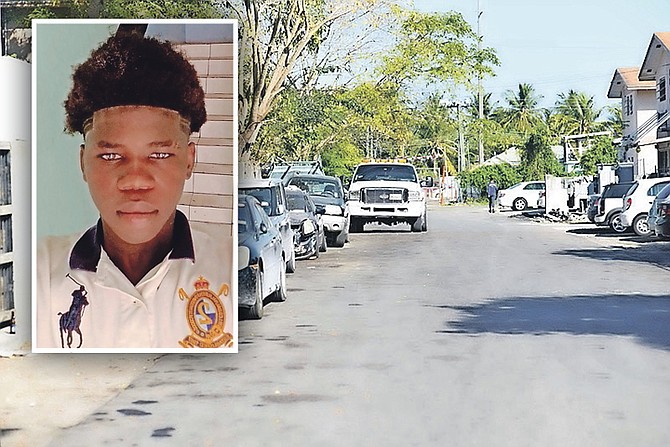 INSET: Kwondrick Lowe, 18, who was shot and killed by police on Saturday. MAIN PHOTO: The scene of the police shooting in the Kemp Road area. Photo: Moise Amisial

THE distraught mother of 18-year-old Kwondrick Lowe, who was killed in a police-involved shooting on Saturday, believes her son “ran for his life” when he saw the officers.

She dismissed an official police report that said her son, who was 4’2”, engaged officers.

“They shouldn’t shoot my child like he’s a dog,” Fredricka Richards said.

Police said a man who allegedly engaged police in the Kemp Road area on Saturday was killed by officers around 12.30am.

Officers were on routine patrol in the area of Kemp Road and Edwards Avenue when they saw a man with a gun. The suspect fled the area on foot after seeing the officers.

Police pursued the suspect onto Hillbrook Close, where the man “engaged the police and was fatally wounded,” the Royal Bahamas Police Force said.

EMS attended the scene where he was pronounced dead.

Police said a handgun with ammunition was recovered from the deceased.

The coroner will investigate, police said.

Ms Richards said she didn’t learn of her son’s death until hours after he had passed, adding her son was “kind” with a future ahead of him.

“All he wanted to do was fix cars,” she told The Tribune.

“Be a mechanic, that’s all my baby wanted to do,” she said.

Ms Richards said her son had always been fearful of police, saying she believed he “ran for his life” when he saw the officers.

“When they said my son had a gun, I know my child,” his mother said.

“That’s a lie, shoot at them? I know my child, my child scared of police.”

Ms Richards said the day of her son’s death she was told he went out with some friends to a club.

Asked if she believed her son had a good social circle, Ms Richards responded “no” noting her son’s friends weren’t good company.

Cynthia Ferdinand, the victim’s grand aunt, said she was told her nephew was on his knees pleading for his life when police approached him.

She said that the deceased was only 4’2 and barely weighed 120 pounds, adding when they viewed his body he had seven bullet injuries.

“Seven bullets in him, we went to identify his body not too long ago. On his left eye it’s a big bullet hole.

“That’s overkill but y’all (police) in fear for y’all life.

“What they have to realise, too much of these police are doing this to people children; they are not dogs, they have family. And they (police) are getting away with it because it gets swept under the rug,” Ms Ferdinand said.

The distraught aunt cried out that her nephew will not be another statistic, adding her family wants justice for him.

Members of the family said that they are in need of a lawyer’s assistance to aid in the investigation surrounding Lowe’s death.

The distraught family said that they want answers and footage of what led to the fatal incident.

Until we have police cameras we will never know for sure. Hopefully, they also commit to train police with proper non-lethal weaponry such as pepper spary, pepper balls, tasers, rubber bullets, flash stun devices and etc.

However, I must note that the mother's comment(at least in this context) seem confusing it seems like she asserts that her child was afraid of police but then justifies that he could never be violent toward or be in possession of lethal weaponry. She then seems to double down that her son's fear of police was a healthy and good mindset even tho it may have been what killed him(because he ran).

Because as far as I know if you believe you must run from the Police you either have an aversion for the law/authority, something to hide, or past police related trauma (this is reason is excusable for the son, not the mother). Police most likely ain't gonna chase somebody who doesn't run and they are probably less likely to be killed.

So unless the Police executed the young man point blank, committing a grievous tragedy, he most likely ran causing the police to chase him and then he got cornered/stopped where he was shot. If he did run then its quite likely he was armed, as he would probably not stop his escape to turn round and engage the police. His body position, and blood droppage should confirm the story. Fingerprints will prove if the gun is his or planted. Ballistics can be used as additional evidence for overkill/2nd degree murder or self defence.

Not a complex case if done properly and legally.

Your children keep company with people who are just like them...if its bad company, then your child is probably bad too. Sounds like this young man was living a double life. Poor mom....left with the pain of it all.

Is this the best photo they could find for him....scary looking dude, just looking at this photo.

If you have nothing to hide why run? if you hang with thugs, guess what! you are also a thug. Thug life forever right? Instead of lambasting the people charged with keeping the peace why not try to encourage more positive choices in the younger family members. Running away from police at 1230 at night is a recipe for disaster. "Not My Good Son" right?

So running from the police is a crime punishable by death? How idiotic a statement. Many run away to avoid confrontation. If May just have another good son murdered.

When you have a gun? Depends. The police have their own lives to consider.

Only the police said he had a gun. Ry witnesses says otherwise ( as usual). And as long as there are no enquirers into police shootings, then yea, these type killings will continue.

And until the police have cameras on that show what happened we will never know. All that will happen is more people will distrust the police until it goes to far. I am sure they have the videos of some of these incidents but don't release due to what it shows.

There are three police officers and two paramedics recently charged with the death of an 18 y/o teen in the US. The boy was walking not far from his home when cops pulled up on him. There was a confrontation and paramedics were called. They injected the young boy with drugs, then strapped him, face down, on the gurney and took him to the emergency room. He arrived unresponsive and never gained consciousness after that.