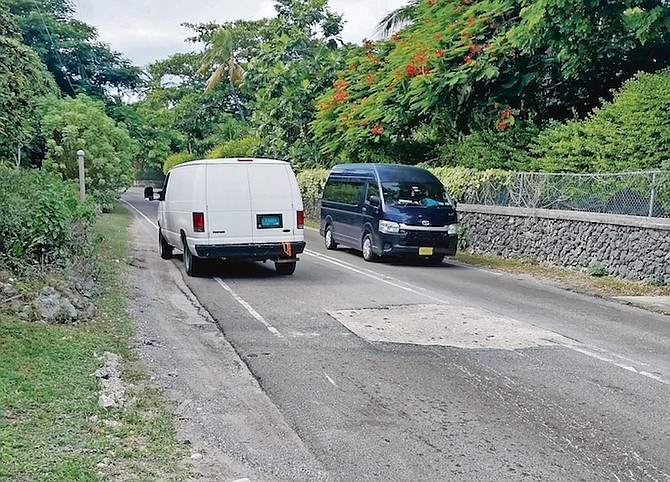 TRAFFIC veering around a gaping hole on Eastern Road yesterday.

IS it just my imagination or are our roads getting worse and worse again?

Driving along Eastern Road last week, suddenly there’s another badly filled in hole after one of the utility companies had done some digging.

It looked like they’d done nothing more than thrown in some sand after they’d completed their work, leaving a gaping hole that either left drivers rattling their teeth as they drove over it or caused traffic to back all the way up as everyone slowed down to veer around it on one side or the other.

It’s far from the only one – further down on Bay Street, there’s another similar hole not far beyond the bridges, leaving drivers to hit the brakes and pull around it, hopefully with traffic coming down the outside lane seeing them in time to avoid a collision.

I can think of half a dozen other spots with potholes right away too, and I’m sure you can too, in your own local neighbourhoods or on your regular traffic routes.

So is it getting worse? It seems so. What happened to those fines that were being brought in to make sure potholes got filled in quickly and properly by utility companies?

Back under the last administration, amendments were passed in February 2019 to the Road Act to clamp down on companies that were lax in restoring roads to an acceptable standard. And throwing a few buckets of sand in and driving away isn’t acceptable. 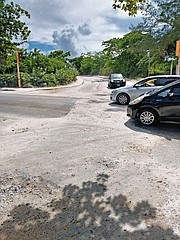 CARS inch their way over a rough patch of road at Montagu.

The old fine used to be just $75 – cheaper to take the fine than to pay for the items you needed to do the job properly. The change bumped that fine up to $10,000, with an extra $5,000 for every day the nuisance continued. So where are the fines? Where even are the inspections of the roads to see where the problems are?

Did you know there was a WhatsApp line set up to report such potholes? Former Minister of Works Desmond Bannister announced it at the time – 376-0939. He said: “Nobody should be calling the minister about potholes. Send it to our WhatsApp line and you will get an immediate response.”

Still, a system that leans on citizens reporting after the fact isn’t a proactive one. Why not simply have utility companies having a requirement to report to the ministry the location and extent of works, and a standard inspection being carried out afterwards. If they’ve done it right, that inspection is a two-minute drive-by. If they haven’t, then break out the fines.

Of course, works carried out under the auspices of the Ministry of Works can be frustrating too – as anyone who has been in the vicinity of Village Road lately will tell you. Both ends of the road were blocked last week, and parents of children at Queen’s College were left to devise ways through backways and side roads to get there.

Even the places that are open are only navigable with caution. The junction with the traffic lights at Shirley Street resembles the surface of the moon, while further down, the junction at the lights by Montagu has a bone-juddering rift that runs the full width of the road. Slow down or find out exactly how good your car’s shock absorbers are.

Half the time, you see potholes in the same places over and over again. Even former minister Mr Bannister commented on that when in the job back in 2018. He said: “The potholes that are there have been appearing in the same places at the same time of year for many, many, many years. The problem has been that we’ve had quick, temporary solutions rather than holistically looking at them and dealing with them appropriately.”

True enough, but we’re still there.

Even having had a Royal visit lately hasn’t helped – that Village Road construction dug up some of the smooth new surface laid for visitors who we didn’t want to disturb with a bump.

No, bumpy roads are just for commoners like you or me, it seems.

I know this all seems like a grumble – and it probably is to some extent – but really what is the point of putting forward laws to clamp down on such things and then never using them?

We all know the places that have the same holes and bumps over and over again, so I’m sure the staff working at the ministry must be aware too.

And relying on public reporting leads to detective work to figure out which company did what rather than just having a simple log of what has been done where.

It seems we could still be doing better – so why not do so? If only for the sake of all our bones as we rattle our way across sub-standard roads and inadequate repairs.

The real culprit is Christianity. I mean, are we truly a Christian nation with roads built and maintained by Christian road paving sub contractors who are paid by a Christian government? It all depends on faith. If the utility companies had Christian employees they would self report digging up the roads to the Christian road traffic department. The two Christians could come up with a Christian solution to the potholes and co-ordinate timely repairs. But they aren’t putting their faith first, are they? No honesty on the government end either. Tell us, dear Christian leaders, how much of our Christian taxes are used on unnecessary unchristian road repairs?

Christianity left us in 1973. Upon independence we reverted back to piracy. All for me baby!!!

These roads are gangsta.

Aren't the "Utilities" just another subsidized part of our "Government" ?

Smttttt...the capital city with the roads of a deserted cay. But they want us license and insure our cars on time while paying almost $7 a gallon for gas. Public transportation is a joke and don't work at night. It's almost as if🤔...we pay taxes for nothing. I love my fellow Bahamians and my country but I have an absolute and unequivocal disdain for the level of incompetence (and corruption) displayed by ALL of our so called leaders...They expect us to to do so much with so little but in return they do so little with so much...Cheapus ya let them potcake what running round lead cause it can't make no less sense than it making now.