INSIGHT: Will our politicians ever tackle the issue of marital rape? 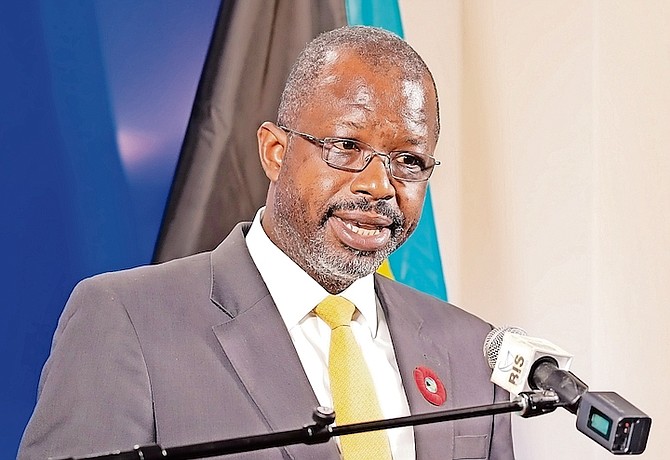 THE issue of marital rape is one that seems to neither ever go away or be seriously handled by our political leaders.

So to see National Security Minister Wayne Munroe once again mutter inconsequentially about the issue gives no hope of this ever being more than another echo from the can being kicked down the road.

Mr Munroe has spoken on the issue of marital rape before – and his comments were not received well.

He said that marital rape should be referred to as something else, call it something other than rape, if you actually want to secure convictions.

This was in March, at a meeting of the PLP’s men’s branch – an interesting choice of audience. He said at the time: “When we engage this debate, it should be in this fashion: What behaviour are we wanting to outlaw? After we define what behaviour we want to outlaw, we can write it down and you can come up with any name to call it. But if you call it rape, in the modern-day Bahamas, it will have a very low conviction rate. Then, you would only be successful if your objective was to call it that as opposed to get people punished for it.”

He also suggested – bizarrely – that the divorce law would need to be adjusted. He said: “We would have to change our divorce law in two ways: If your spouse can withdraw consent for sex, then adultery ought no longer be a ground for divorce.

“Will wilfully refusing your spouse intercourse remain a description of cruelty or available for cruelty? Those will be two ancillary questions that come with that. You have to contend with those at the same time.”

“Wilfully refusing” is quite a challenging phrase there – how many times does a spouse have to refuse being raped before it is deemed wilful in the eyes of the law?

On Friday, Mr Munroe returned to the topic, calling marital rape a “social issue”, that required “sensible reflection and retrospection”.

First he lectured the FNM for not having done something about marital rape in their time in office, while he also said there was a need to define exactly what would be criminalised – that same theme as earlier this year when he asked what behaviour we wanted to outlaw.

Well, I have good news for Mr Munroe – The Bahamas is not the entire world, and a significant number of countries around the world have already done the work.

In fact, the first country to criminalise marital rape did so an entire century ago, in 1922.

As of 2019, about 150 countries around the world had criminalised marital rape. In some countries, that means specific laws about rape within the marriage, in others the law makes no distinction between rape by a spouse or rape by anyone else.

In the United Kingdom, with which our legal system has many historic connections, marital rape has been illegal since a marital exemption was overturned by the House of Lords in 1991. The maximum penalty is life imprisonment – while there are also measures such as personal protection orders and protection exclusion orders for female victims of violence.

Look across the water in the other direction, and you’ll find that marital rape has been illegal in all 50 US states since 1993.

So this talk of working out what it is that we have to define under the law seems like obfuscation at best.

Mr Munroe has long seemed opposed to laws on marital rape – back in 2009, he said: “The problem that this creates is this: All you need is for there to be dysfunction in a household and a woman to be upset at a man and rape does not require any trauma – and she calls the police and says my husband raped me. You would be arrested and you would be the subject of domestic orders. And it will be your word against hers as to whether she said no.”

This idea of women crying rape ignores the reality of how hard it is for a rape case to reach the courts and be successfully prosecuted.

But Munroe’s is far from the only voice on the issue – just one in a prominent position in government as the minister handling the issue of crime, of which rape is one, but not marital rape. Under our laws, the definition of rape is “the act of any person not under 14 years of age having sexual intercourse with another person who is not his spouse a) without the consent of that other person; b) with consent which has been extorted by threats or fear of bodily harm; c) with consent obtained by personating the spouse of that other person; d) with consent obtained by false and fraudulent representations as to the nature and quality of the act”.

Earlier this year, some of the voices that sounded out on the issue included gospel artist Christopher Huyler Roberts who said on social media: “There is no way a man married to a woman can be guilty of raping his wife. Utter nonsense. “

Politician Ali McIntosh, who has a long record of failing to win seats in elections with the Bahamas Constitution Party, said marriage and rape should not be in the same sentence as duty-bound women would submit to their spouse. She said: “Only sex after violence, involving the beating and wounding of an individual in marriage, should be considered rape.”

Former DNA party leader Branville McCartney, back in 2012, was a prominent voice against marital rape laws, saying that because a married couple is considered “one”, he did not think there should be an act or law for raping a spouse.

At the heart of the issue for many is this idea that one gives oneself completely to one’s partner in a marriage. And perhaps in an ideal marriage, that is the case. Some may comment from within the bounds of such marriages, without looking too closely at those marriages where a husband might rape his wife. To reach that stage, the marriage is broken already.

If we actually want to proceed with laws on marital rape – and Mr Munroe himself has noted that we have signed international agreements to criminalise marital rape – we do not need to look far for the definitions and the laws to use.

The reality is that it will not likely lead to large numbers of criminal convictions, as rape cases can be hard to prosecute already. But to pretend that this is somehow a new thing we need to work out is disingenuous.

However, for the moment, it’s not something we’re likely to see progress on. The way this is being talked about is exactly the way an issue gets discussed that a politician has no intention to do anything about. So perhaps this is a fool’s errand – but equally, we should not let our leaders treat us like fools.

Have you ever considered the importance of Marital Robbery, Marital Assault or Marital Murder? That is the idiocy related to amending current laws to accommodate the address to Marital Rape! Utter Lunacy!!!