‘Promotion process was all above board’ 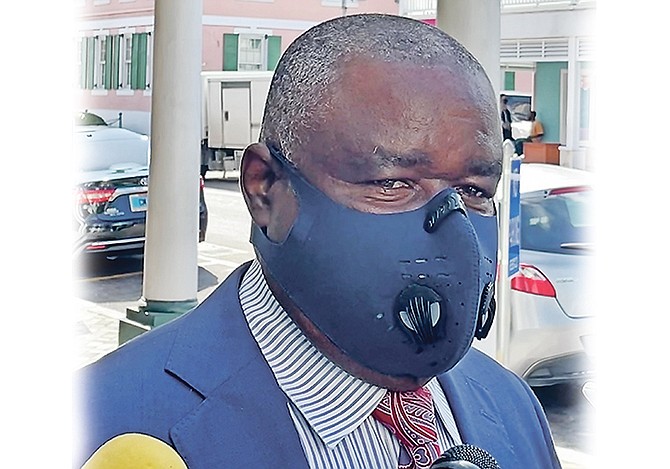 FORMER Public Service Minister Brensil Rolle yesterday defended public sector promotions granted in the weeks before the general election, insisting the previous government was simply acting on years’ old recommendations that were in some cases left behind by the Christie administration.

The former Cabinet minister said it was unfortunate that thousands of public sector officers and their deserving promotions were being portrayed as politically driven when this was not the case.

He questioned whether Foreign Affairs and Public Service Minister Fred Mitchell was comparing the former Minnis administration with the 2012 Christie administration, saying: “Perhaps he was reflecting upon what they did just before elections last time and perhaps he thought that we were like them, but we were different.”

On Sunday, Mr Mitchell told reporters the promotions were temporarily halted to give the new government an opportunity to review them to ensure nothing “nefarious” had taken place.

When he was contacted yesterday, Mr Rolle explained the promotions came on July 1, after there had been a freeze on promotions, reclassifications and hirings except in exceptional circumstances.

He rejected the suggestion the promotions were awarded with ulterior motives.

“You will recall that all promotions, reclassifications, were on hold, and we lifted that in July of this year prior to elections being announced,” Mr Rolle told this newspaper.

“I can assure you that the permanent secretary in the Ministry of Public Service sits by and abides by every single protocol and so I don’t see anything nefarious being done by promotions of public officers.

“I think it’s regrettable that the PLP would inject this level of politics into something as important as promotions of public officers.”

Mr Mitchell has said the Davis administration was suspicious that the promotions were an attempt to either offer an incentive in exchange for support of the previous government as it headed into the 2021 general election or a “poison pill.”

He said in the latter instance it is thought people promoted or hired were presumably supporters of the Free National Movement and would end up “causing problems” for the new administration.

To this Mr Rolle said he was of the view it was very difficult for public sector promotions to be driven by politics, adding they were usually slow moving.

Asked then if he was defending the previous government’s actions, the former minister said he had no other choice.

“And that process does not take a week. It may take a month. It may take two months for it to take place and so, yes, some persons may have been hired up to and during election time. Some persons may have been promoted during election time. But I can assure you that scores of those promotions, scores of them, were recommendations.

“Remember when we came to office in 2017 one of our first actions was to put a freeze on hiring to deal with the placement of individuals who were hired and who were promoted and so for the last two years there were no promotions and no hiring in the service.

“I certainly don’t see why the minister took the position that he took, but he is the minister. It’s ‘a new day’ (and) the first action by the PLP is to not promote individuals in the service who are duly promoted, and I am going to stay on the side and watch.”

He added: “I can assure you that I did not work the night of elections or the night before elections. I did not do anything on election night or on Election Day. You will not find scores of individuals around the Ministry of Public Service and or other government agencies who have been sent there and told to go and show up. That was a set of circumstances that were in place in 2017 and we did not, and this is critical, we did not send the individuals home.

Mr Mitchell said when he assumed his office at the Department of Public Service, he found “stacks of promotions,” many of which he said he suspected were “long overdue”. He said in view of this fact, he did not want to put a “negative imprint” on the situation.

When asked how long the hold would be, he said he could not say for certain. Mr Mitchell said it was important to make a “distinction” between the routine public service jobs and political level jobs.

When asked on Sunday if all of the promotions that happened in the last few weeks of the Minnis administration in the public service have just been halted temporarily, Mr Mitchell said: “Yes, that’s a way to describe it, just to let us have a look at it because you don’t want anything nefarious to be taking place.”

Well, there should be no problem with a look see. If everything is transparent , it should be clear.

Well. . .why don't you tell that to the many 100s of civil workers who have been waiting for those promotions for the last 5 to 10 years. . .they all knew that Mitchell may have done something like this!! You know and I know that every election family, friends and lovers "get they things" just in case the next group wins the election!! But this cycle was the FNM "fixing" a long outstanding problem of promotions "getting stuck" the system for plenty years! This process was going on for the last 2 to 3 years now. . .Mitchell knew that!!

But, I guess he wants to "get at" FNMs that he lumps everybody together. . .playing politics with the misery of the people!!

He knows who the political appointees are!! Send they hips home. . .the people expect that to be done. . ."ya got ya job by politics, so ya run the risk to lose it through politics"! We get that. . .but stopping all promotions? This will end badly. . .take my word!!

Many Bahamians don't realize that a big part of the political strategy of our corrupt FNM and PLP politicians alike is to execute a scorched earth plan in the face of an impending national general election whenever the party in power foresees that it will unlikely remain in power. This has been going on for nearly 25 years now as we alternate every general election between corrupt FNM and PLP governments with devastating financial consequences for our country.

Aboveboard Mr: Rolle does not know what it means. He has been in the ditch too long. After all, he admits that he gave Mr kawsi Thompson wife a job out of the blue. he created a high position.

Now is the time to thank you very much and goodbye. Mr: Rolle.