Pm On Healthcare Funding: We Are Hoping That Borrowing Would Be Last Resort 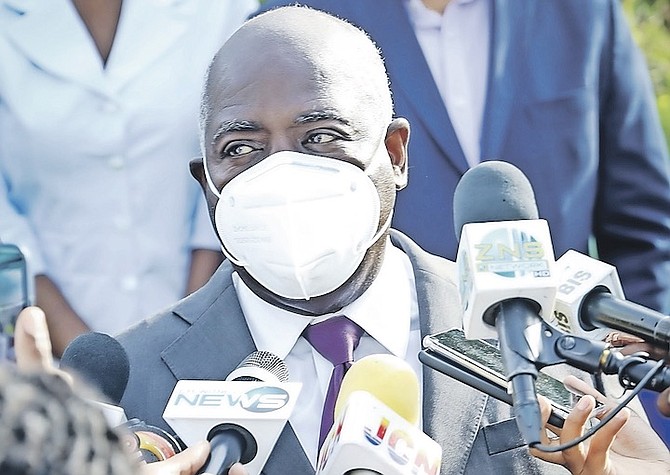 PRIME Minister Philip “Brave” Davis said it is hoped that "borrowing would be the last resort" as Health and Wellness Minster Dr Michael Darville noted a need for emergency funding for the public healthcare system.

Mr Davis, who was sworn in as minister of finance earlier on Friday, spoke to reporters before leaving for New York to attend the United Nations General Assembly.

While speaking about his trip, Mr Davis addressed the issue of whether there is a need for international borrowing or if there was sufficient funding for the public healthcare system amid the ongoing COVID-19 crisis.

“Well the request of the minister has been made known to the Ministry of Finance,” he said on Friday at Lynden Pindling International Airport. “We are looking at how best we could meet those demands and we are hoping that borrowing would be the last resort. We’re hoping to be able to enhance our collection of revenue to enable us to avoid borrowing and what is available we’ll use and employ wisely to ensure that we meet the challenges that he’s facing in the healthcare system.”

Since his appointment Dr Darville visited on Friday such healthcare facilities as the Princess Margaret Hospital and Sandilands Rehabilitation Centre.

He told reporters on Thursday: “My initial assessment is we have a lot of work to do and there’s definitely a need for emergency funding.”

Meanwhile, Mr Davis will speak at the General Assembly on Saturday during the morning session. He will also have a bilateral meeting that day with United Nations Secretary-General Antonio Guterres.

He explained his administration considers it vital to strategic interests that The Bahamas plays a “more active role” in international affairs.

Mr Davis added: “We consider it extremely important to attend this meeting of the General Assembly in order to firstly, to communicate the priorities of our new administration; secondly, to hold bilateral meetings with other delegations representing countries with whom we hold special relationships, including the member states of CARICOM, the United States, the United Kingdom and others; and thirdly, to lay the foundation for the very critical Global Conference on Climate Change being held in Scotland in November.”

One of the topics he hoped to address is climate change.

“I wish to point out to the world small island developing countries such as ours are the victims of larger developed states who contribute much to the ozone depletion and therefore more attention ought to be paid to assisting us and providing the funding that’s necessary to assist us in building resiliency in so far as our infrastructure,” Mr Davis said.

Asked about outcomes he was hoping for, Mr Davis said there were several.

“First of all, part of our issue which I’ll be addressing as well tomorrow (Saturday) is our COVID response. I want to remind the world that one country being safe is not sufficient. We are only safe when all countries are and in that regard we would wish to have reasonable access to vaccines which is one of the fundamental tools for this fight against COVID and we’re going to press upon the world leaders that we need to ensure that small island development states or SIDS are desperately in need of vaccines and they ought to be liberal with their donations to countries such as ours.”

This is working in India, Mexico and Japan.

Early treatment can "save lives", and can save the government money, at the same time!

... he may want borrowing to be a last resort, but its always their first response!

The Davis-led PLP administration needs to transform the existing corrupt numbers racket run by the racketeering thugs like Bastian and Flowers into a National Lottery with the profits derived therefrom exclusively earmarked for the funding of our country's health and education needs.

If the current leadership of the PLP party is truly progressive in its thinking, then it should work expeditiously to undue the horrible wrong that was committed by the last Christie-led PLP administration in not respecting the will of the people as was expressed in a duly held national referendum on the legalization of the previously illegal gaming webshops.

It is fundamentally wrong that thugs like Bastian and Flowers should be allowed to accumulate enormous wealth from Bahamians addicted to gambling when their 'ill-gotten' and illicit, yes illicit, great source of wealth could so easily be channeled by way of a National Lottery to help meet the emergency funding needs of our public health system and public education system.

Make no mistake about it, Davis would become a national hero overnight if his administration seized the bold and brave initiative (Brave pun fully intended) to completely transform the corrupt numbers racket run by the webshop thugs into a National Lottery for all of the Bahamian people.

Wow, maybe the very first time I agreed with Tribanon & his suggestion could quite well be the Savior of Bahamas Health Care System. Well done Tribanon, hopefully someone in Gov't reads your suggestion.

You really think Davis could undo something he was a part of?

No, but then again, I didn't vote for either the FNM or PLP candidate running for elected office in my constituency. I'm just not that damn stupid. Besides, one of the independent candidates seeking elected office in my constituency was by far the better candidate which probably explains why they didn't stand a chance in hell of winning. The majority of voters made our bed and now we must lie in it. We can only reap what we sow.

He knows that he has to borrow , he knew he would have to borrow from last year. Just playing with words.and the people's minds. He will have to borrow. There is no other way. After that, the people already paying taxes will have to pay" their fare share" , once again.everytime money is needed taces payers almust pay their fare share again and again. The Damn fare share keeps going up. Maybe we should stop spending what we do not have .

Even the ability to borrow quickly comes to an end when lenders perceive the risk too great that they will be left with nothing in return. Right now international lenders probably perceive the Haitian invasion of our country and excessive government corruption to be significantly greater risks to the near term future of The Bahamas than even COVID-19.

Oh great, we are down to hoping now, instead of planning, prioritizing and budgeting. Next up wll be praying i guess, although that didn’t seem to help the previous government.