Hubert Minnis Sworn In As Leader Of Opposition 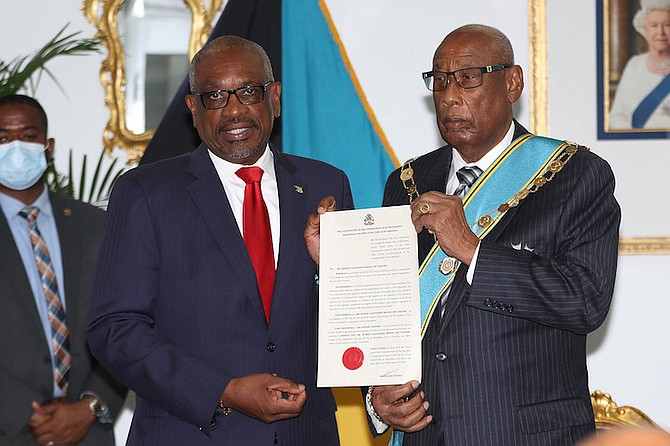 FORMER Prime Minister Dr Hubert Minnis was sworn in as leader of the official opposition on Friday.

The event took place at the Office of the Governor General.

On September 16, the Free National Movement suffered a crushing defeat at the polls, winning only seven out of 39 seats.

On the sidelines of the event, Dr Minnis said the group will be an effective opposition despite its size.

On Wednesday, FNM Chairman Carl Culmer revealed that the party’s council agreed to let Dr Minnis remain leader of the party until a new leader emerges from a convention in November.

The meeting followed the FNM executive committee’s decision to recommend to the council that Dr Minnis remain leader during the transition period. Dr Minnis had told committee members that he will hold on to his Killarney seat and has no plans to resign from the House of Assembly.

On Friday, Dr Minnis said he hopes the new administration will keep the policies he implemented to give Bahamians a better life and implement his promised universal school lunch programme—which he had announced on the campaign trail that he would introduce if re-elected.

“We had a plan in terms of pre-schooling, which we’ve introduced free. I would like that to be maintained because we know that pre-schooling is very important for quality of life and outcome. We would like them to keep and implement the universal lunch programme.

“I know what it’s like to go to school without lunch, without breakfast, that affects you,” Dr Minnis said.

How embarrassing — Clingin' onto a party, wishes he'd go away. — Back doctoring — stewing fish could work— Yes?

Amazing. He will attempt to shovel tar on Brave from his four year health, moral, religious and financial hell hole of ruin of his making. He alone knows where the damages lay and expect him to rub pepper on the soars and burst the boils in vindictive stuper crazed and negatively detrimental self serving fury that have everything to do with party and people destruction that rejected him. He has nothing else to offer. His last stance will embarrass his managers in uncontrollable fits, a desparate man with nothing to lose and they too will walk away in shame. Hell has no fury than a jilted lover. His polacy will be one based on dejection with no love or posative growth. Such a weak human unable to sit in the seat of humility.

In all fairness to Dr. Minnis, If he were man enough to fullfill his 2017 campaign promises, he would have won a second term with another landslide victory. Regardless of all the missteps and relentless criticisms he now attracts, he did accomplish some great things while in power. Making higher education free was long overdue in this country and cannot be deminished as part of his legacy.

Unlike Hubert Ingraham who broke off running and hightailed into hiding everytime he found himself in the hot seat, in the end at least Dr. Minnis has the fortitude to stand his ground and take the assault and coming abuse that's bound to hound him for many years.

Dr. Minnis missed a golden opportunity to become the most tranformational prime minister in the history of our country. Now PM Davis seems to be setting things in motion to claim that opportunity.

COB was free for decades for persons with B- and above results. He caused chaos at the university with his ill-planned, let everyone in strategy. What he should have done was mapped out a transitioning system somewhere between high school and college prep

That is what college prep is , preparing for college work or classes.

Seriously? What is the transition between high school and college prep?

He didnt show up to offer his concession speech. He sent a "statement" to say he'd be leader of the opposition as if it was his decision. A written statement! He didnt show up to the swearing in of the new PM. In all honesty I dont recall if Mr Christie showed up to his. But the one thing we absolutely did not have an example of was "fortitude"

YUP. A HUGH MISTAKE WHICH SPEAKS TO THE EXTENT TO WHICH THE MAJORITY OF THE FNM PARTY'S COUNCIL MEMBERS OBVIOUSLY MUST CARE MORE ABOUT THE VERY POWER HUNGRY, EVIL AND DISGRACED MINNIS THAN THEY DO ABOUT THE FUTURE OF THE PARTY.

Absolutely true. They're definitely thinking of themselves and not their supporters who told them loud and clear they wanted Dr Minnis and Adrian Gibson gone

Minnis's actions are but another of RedParty's — Dumpster Divin' Public Image Screwups. — Whenever they're forced into shaking off the party's — Founding Fathers UBP history.
A good sign of sincerity, might've started, had they just removed from RedParty's Mackey Street Headquarters — Founding Fathers' wall, the —Staid portraits — of four the most substantive of UBP's, — Ever walk Bay Street. — Yes?

doc Minnis wants the PLP to implement his doc campaign promises to give free lunch to those who can afford to buy their own lunch..

something is wrong. with the Doctor for sure.

doc is even making Mr: C, A, Smith very sad. but doc and Culmer is good for the FNM party

Culmer want people to believe their headquarter had no alarms and no cameras and someone just broke in.??

Your effort Birdie at reverse psychology in saying that Minnis and Culmer are good for the FNM party is much too transparent. We all know you of all people would love nothing more than to see them remain where they are for as long as possible because that would greatly benefit Davis and the PLP party.

The north? lol... I wonder if it is that serious. The question would then be who is king? and watch out for women with blonde hair

The FNM needs a new leader. The elections were clear on this point.