EVERY prime minister in recent Bahamian history has faced what at some hour must have felt like a Sisyphean mountain to climb. Hubert Ingraham had a hurricane named Andrew. Perry Christie had a deluge of crime and debt. Dr Hubert Minnis had a double blow, Dorian and COVID.

It is little wonder that with his own hands full, Prime Minister Philip “Brave” Davis called for all hands on deck when he named the final members of his Cabinet on Wednesday. 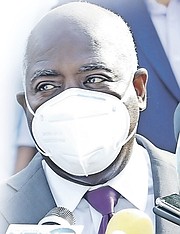 Davis has a population behind him who recognises his warmth and the challenges he faces. We know that of the thousand things that need attention, two are so urgent that failure to confront them head on could impact the sovereignty of this nation and the well-being of every single one of us.

Ironically, the end goals of the two three-ton elephants in the room stand in total contrast. The prime minister has to grow the economy and halt the pandemic, rev the engine of the former, pump the brakes on the latter.

If the new prime minister keeps his eye on the prize – the pandemic and the economy – partisan politics will take a back seat and he will be a hero. More importantly, he will save a country that is teetering on the edge of a very steep and dangerous cliff. He must head off attempts by others to control and manage The Bahamas by leading the march to grow a new economy to reduce unemployment, dependency on government, a sense of hopelessness and, most urgently, debt.

The thing about debt is it is so easy to get into and so blessed hard to get out of. The bigger it is, the faster and more dangerous it grows, multiplying on itself, like a cancer. When it comes to debt, you don’t have friends. You have those who want to collect or bail you out on their terms. The very independence of The Bahamas is at stake.

Though it is tempting for a prime minister to get sidetracked – to divert attention to the needs of education or preservation of natural resources or resolving a labour dispute – this prime minister cannot afford to take his eye off the prize.

He will have to provide guidance, especially for newcomers to their roles, but he will need to make them take charge with their permanent and deputy permanent secretaries and senior officials in their ministries while he focuses on the economy and the pandemic.

There is deep wealth in The Bahamas that has never invested or is reluctant to invest in The Bahamas for justifiable reasons. Red tape is so red it’s magenta. Returns are risky. Ease of doing business should not even be a phrase. What ease? Digitalisation must be sped up, forms available, completed and filed online, standards met, not who you know but what you can bring to the table that benefits the most. Call together a zoom round table of the most successful people you can reach, here and abroad. And listen.

Along with financial wealth, there is a reservoir of natural resources and geographical bounty that could make The Bahamas one of the richest countries in the world but for years we have been doing the same old, same old. It is time to reinvent the economy.

Why are we not a major maritime or aviation hub given location? Why are we not a major medical research and wellness centre? What is keeping us from re-creating our downtown or telling our story that goes far beyond the world of Junkanoo? Why are we still standing in line to get a licence disc instead of being the Silicon Valley of the region? The title is still available, no one else has claimed it. We cannot afford to continue taking baby steps. It is time to leap, to think big, to seek advice from those who did so successfully and listen.

I will be accused, as I often am, of being a Pollyanna. I don’t care. But I believe the economy can take a dramatic turn if we approach it in a dramatic way and think of it as a new economy. If, on the other hand, we just tax more to try to wiggle out of debt, all we will accomplish is turning more potential investment away, particularly that of Bahamians who right now could be forming consortiums to buy vacant government buildings, to develop a high rise east of East Street in Nassau with green space around it, to turn Grand Bahama into a regional medical and tech research capital, to make Eleuthera the wellness centre and the blue holes of Andros and Long Island among the most famous and sought after dive spots in the world.

There is a group working on carbon credits from sea grass that must be protected. Welcome them, work with them, enhance the cruise visitor experience so more guests disembark in Nassau, create a Bahamian wedding-honeymoon package that takes couples throughout the country, experiencing a journey from large to small properties to see the best of all worlds within this amazing land.

But most of all, we must get the vaccination message right if The Bahamas is to get up off our knees and truly get back to some sort of normalcy where we can hug a friend again without fear, where children and teens can get back into a classroom and to after school activities, where a soccer or basketball team can play a season. And to do that, we must reach herd immunity. That means getting the message right.

Our messaging about why to get vaccinated has been all over the place and everything but effective. It cannot come from government because of a natural distrust when officials tell you to put something in your body. We need an ad council to prepare a campaign that includes the real-life stories of the unvaccinated, the 60-ish man gasping for breath begging for air, asking if it is too late to get vaccinated, the child burying her mother sobbing, “If only she had gotten the shot.” We need one sharp young woman telling a date ‘No thanks, I’m not taking a chance if you say you’re not vaccinated.’ We need to take pandemic safe interaction as far as we took the message for safe sex. And we need to step up the information about the rewards currently offered and add to that process. Risk and reward, key elements.

Or we can just see how many Bahamians instantly overcome their fear and their Bill Gates wants to put a chip in me conspiracy theory belief if the US rules no unvaccinated foreigners can cross the borders. Just see how busy the vac centres will be if a trip to Walmart is at stake.