Davis: We have seen damage from rule by just one man 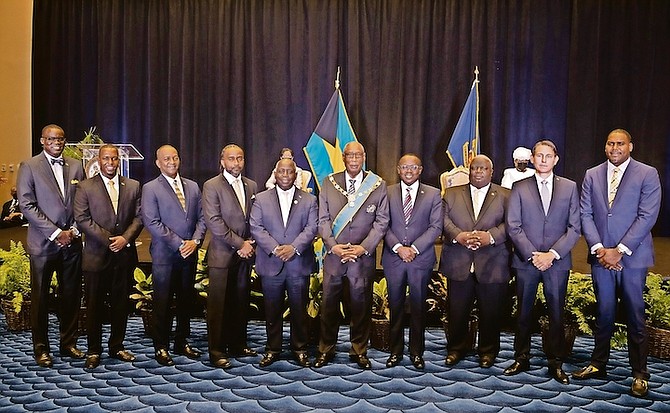 PRIME Minister Philip “Brave” Davis has revealed that his government will follow a “servant-leadership” concept, saying “we have all seen how the rule by one man has damaged our country”.

Mr Davis’ remarks came while welcoming seven new parliamentary secretaries who were sworn in at the Grand Hyatt, Baha Mar.

“Over the past few days, I have spoken in earnest about my intention to lead an administration that works in partnership with the Bahamian people,” Mr Davis said at the ceremony.

“For me and my colleagues, the concept of servant-leadership is not just an idea.

“We want to transform governance in our country and make servant-leadership a living, breathing reality. I wish to underscore the fact that an essential component of servant-leadership is the need to work together: to consult, to consider, to understand and to action the will of the people.”

Taking an apparent swipe at former Prime Minister Dr Hubert Minnis, who some accused of taking a one-man band approach during the pandemic, Mr Davis said his party will not make the same mistake.

“We have all seen how the rule by one man has damaged our country. We will not make that mistake, and will do everything possible to work in the best interests of the Bahamian people.”

Mr Davis also defended the size of his 22-member Cabinet, saying the country is in crisis and said it takes all hands on deck to solve the various challenges. His Cabinet is slightly larger than the one appointed by Dr Minnis in 2017.

“As we welcome the seven parliamentary secretaries who have just been sworn in, I want to take the opportunity to expand a little on the broad reasoning and rationale behind the Cabinet appointments,” Mr Davis said.

“Our country is in crisis. These challenges are unprecedented in scale and scope, in breadth and depth. First of all you need to make sure you have a team in place that is heavily focused on the things you wish to get done.

“This is why in my remarks yesterday, I alluded to the need to put ‘all hands on deck’. Afterwards, members of the press queried the need for the size of Cabinet that I have appointed. It made me realise that I needed to spell out in greater detail, exactly what the job of this Cabinet will be.”

Mr Davis said his experience in government has taught him how easy it is to get caught up dealing with what is urgent, because of the need to address the day-to-day priorities. However, he said, in doing this “bigger things” are left undone.

“In our present situation, doing just this will be no easy feat,” he said. “But in solving the day-to-day problems, the bigger things are left undone. Our mandate is bigger than that. The Bahamian people voted for change: big change, transformational change.

“For example: when we talk of the health crisis, getting on top of the COVID-19 pandemic is the most urgent, most obvious issue. Every country in the world has encountered challenges, but the previous administration failed miserably, which is why The Bahamas was consistently ranked at the bottom of the global league tables: 179th out of 180 countries, for the government’s handling or mishandling of the pandemic.”

Mr Davis said COVID is a matter of great urgency and implementing the government’s COVID action plan alone could take all of the Minister of Health’s attention.

“But there is so much more that needs urgent attention: the collapse of the healthcare system; the shortage of doctors and nurses; the exhaustion and complete demoralisation of all healthcare workers that led them to strike recently – and the list goes on,” Mr Davis said.

“If we are to solve these problems, and yet still, expand opportunities by getting NHI back on track, build new hospitals, expand medical tourism and so on, it will take determined effort.

“Think about the other challenges: in education, about the state of our crumbling infrastructure with the roads, with BPL, with water and sewerage; and this is before any mention of the state of the public finances. Remember the ten billion dollars in debt?”

He said if the government is going to address the many crises then it will need “all hands on deck”.

Twenty-nine cabinet appointments are so terribly unnecessary. —Translates into 29 fleet motor vehicles — most with chauffeurs, security details, personal assistants, media personnel at ready capture staged photo-ops, groomers, "Gophers,"— Combined numbers to some 290 warm bodies in total, —And that's just some warm bodies, just to move about with each 29 cabinet members every movement.— Plus some 50-100+ more cabinet related appoints that never get media mentioned. — Premier, thousands of Popoulaces — many still wearing PLP campaign shirts — are still going to be lining up for groceries/meals— in hopes of entire families, not going hungry, — Yes?

What happened to the PLP COVID-19 task Force. They was all the PLP listen to in opposition. Will he be using them now to get a better assessment? or the regular doctors in the health system?

Prime Minister Davis's first week in office is very encouraging. It gives one hope as he can be seen laying the groundwork of a solid foundation to a great start and promising immediate future.

If PM Davis manages to avoid succumbing to the temptation and trappings of becoming a dictator as Pindling, Ingraham, Christie, and Minnis did, his proposed inclusive leadership style and actioning the will of the people would not only be a badly needed welcoming change but would also guarantee him a second term in office!

The PM makes good sense in his reasoning for a larger Cabinet. Successive administrations have all been criticized for their inability to simultaneously walk and chew gum. No one can disagree that the country faces an unprecedented amount of crises with the possibility of more unknowns in the wings.

I have always successfully functioned and absolutely agree 1000% it is best to be overly prepared than underprepared in any situation. The next 60 days will be very important. We are watching and hoping for the best.

Davis is already floundering and back on his heels. Too many lousy cabinet and secretary picks. Giving imbecilic Freddy Boy ministerial responsibility for the Public Service is going to cause mayhem in the civil service workforce very early on for this new administration.