Stateside: Fine Words - But Look What They Are Actually Doing Rather Than Promising 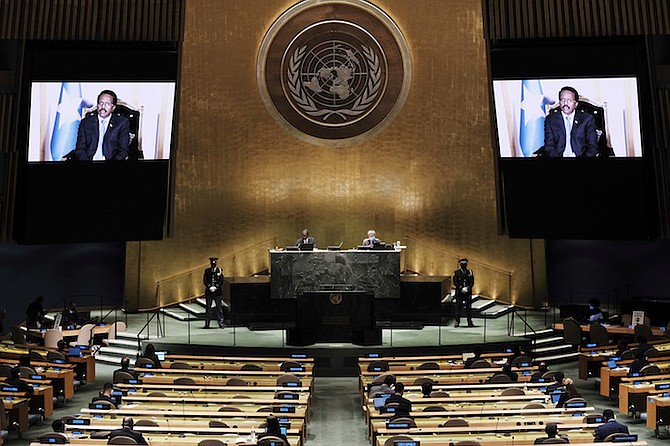 SOMALIA’S President Mohamed Abdullahi Mohamed Farmajo is seen on a video screen as he addresses the 76th Session of the United Nations General Assembly remotely on Tuesday at UN headquarters. Photo: Spencer Platt/AP

We’re in the third week of September. Every year, that means the world remembers there is an organization dedicated to world peace and the harmonious settlement of disputes between and within nations.

It’s United Nations General Assembly week in New York City in the UN’s 75th anniversary year. The nexus of world diplomacy shifts into an ageing but still inspirational building in mid-town Manhattan, looking out over the busy East River toward the borough of Queens.

The UN’s 193 members descend on America’s largest city and typically dominate its peculiar, self-centred news scene. This week, for instance, the President of the Philippines is urging the world to reverse course on inequality. The President of Somalia is emphasizing the need for COVID-19 vaccines for everyone in the world. The President of Iran declares economic sanctions are the “American way of war". Chinese President Xi Jinping makes a commitment to wean his country off its dirty dependence on coal and achieve carbon neutrality within 40 years. The President of Brazil arrives and joins the party, defiantly disrespecting the UN’s coronavirus safeguard measures.

Most observers take all these pronouncements with more than a grain of salt.

After all, back home, Philippine President Rodrigo Duterte has presided over a highly controversial administration that has been reportedly marked by the use of extrajudicial political acts known as “death squads". The American influence in the Philippines is still strong, and Duterte’s methods of terminating drug dealers and other criminals is sometimes compared with the memorably unsentimental tactics of Clint Eastwood’s “Dirty Harry” in five movies from 1971-1988.

Meantime, Somali President Mohamed Abdullahi Farmaajo prepares for the latest “elections” in a nation that has not held a parliamentary direct election since 1969. After assuming office five years ago with a pledge to break that undemocratic trend, the current President has waffled and delayed until finally agreeing an indirect method involving voting by various Somali clans would suffice to select this fractious nation’s next chief executive.

Iranian President Ebrahim Raisi holds some power in the Middle East’s most powerful and belligerent nation. But as he hews to the anti-American party line, he knows real power in his nation is wielded by Supreme Leader and theocrat-in-chief since 1989, Ali Khamenei.

China’s President, who has reportedly not left his country in two years, may be the world’s most feared leader in our current era. As he presides over a central administration exercising tight political control over a sprawling, disparate, multicultural empire, Xi Jinping is leading a menacingly expanding economic and military juggernaut that causes jitters and anxiety everywhere. Climate change opponents won’t celebrate his 2060 carbon neutrality pledge. Many worry that we’ll have definitively lost the climate battle by then.

And then there’s Brazil’s President Jair Bolsonaro. This ebullient showman, who has occasionally compared himself with Donald Trump, has loudly resisted COVID vaccines for himself and has led one of the world’s most heavily criticized responses to the pandemic. Bolsonaro has repeatedly downplayed the threat from the coronavirus, resisted quarantine measures and was fined for refusing to wear a mask in the capital city of Brasilia.

COVID-19 has killed more than 590,000 people in Brazil. They’re going to catch the US (current death toll: 679,000) if the Brazilian government doesn’t soon awaken to reality.

“After the last Brazilian gets vaccinated, if there’s a spare shot, I will decide whether or not I get vaccinated,” he declared on TV. “That’s the example the boss must provide.”

Bolsonaro set a different example the other day. He and some members of his entourage were photographed on a New York sidewalk eating pizza, unwilling or unable to comply with the restaurant’s health protocols.

Brazil’s chief executive has also weakened many restrictions on development and deforestation in “the earth’s lungs” – the Amazonian rain forest. He might join these other Presidents in a sea of bad press.

But during UN Week, there is a predominant civility within the organization’s capacious halls. The culture of mutual respect permeates the atmosphere. And delegates always react with polite applause as political leaders brazenly misrepresent their nations’ virtuosity.

Still, the United Nations does epitomize the practice and potential of diplomacy. America’s own President Joe Biden said so in New York. “We’ve ended 20 years of conflict in Afghanistan, and as we close this era of endless war, we are opening an era of endless diplomacy,” he said hopefully.

“We’ve turned the page. All the unmatched strength, energy and commitment, will and resources of our nation are now fully and squarely focused on what’s ahead of us, not what was behind,” Biden said. “We must all choose to do more than we think we can do alone so that we accomplish what we must do together.”

Biden is in New York reasserting America’s leading role for good in the world, even as some of the closest traditional allies of the US are restive, despite the reassurance that Biden’s election represented ten months ago.

France is sore at the American preemption of its lucrative nuclear deal with Australia, whereby the US essentially scuttled a huge French deal to build Aussie submarines by offering nuclear technology. Britain is uneasy at its failure so far to negotiate a giant Anglo-American bilateral trade deal whose potential Prime Minister Boris Johnson offered during his successful election campaign in 2019 as an economic offset to Brexit.

And Germany, central to two world wars and so many other pivotal events during the 20th Century and still an economic powerhouse, is reportedly reassessing its American ties as it faces life without Chancellor Angela Merkel as its political leader for the first time in 16 years. Germany’s much-anticipated federal elections, when Merkel’s successor will be chosen, are to be held this Sunday.

During her lengthy time in office, Merkel has dealt with five British Prime Ministers, four French Presidents, seven Italian Prime Ministers, and four American Presidents. Her period in power has certainly been eventful, and Merkel's stability during her long tenure has clearly served Germany well. Her relations with American Presidents were better with some than with others, but German-American ties largely held steady.

Now, uncertainty looms in Berlin, and not just on American relations. How a new German government will relate to giant eastern rivals Russia and China is increasingly the subject of scholarly speculation. The ramifications of those relationships will be felt throughout Europe for certain, but also in the wider world.

At a recent forum in Washington held at the well-regarded Wilson Centre, scholarly experts on Germany, Russia and China discussed the future.

There was general agreement that at least until 2019, German business had done very well in China. Under Merkel’s guidance, a positive pragmatic view of this relationship prevailed, both politically and economically. But starting two years ago, the business climate in China for foreign enterprises generally and German ones in particular began to deteriorate.

An emerging bilateral rivalry began to replace previous cooperation. This was underlined by continued political-military Chinese expansion in Southeast Asia and the rancid residue of suspicion engendered by initial Chinese obfuscation about the origins and spread of COVID-19.

While the experts see no cataclysmic decoupling of the German and Chinese economies after Sunday’s election, they agreed change is inevitable. The Green and Free Democratic parties in Germany offer the clearest path to further weakening of ties between these two giant economies. There appears to be a good chance that some combination of Green/FDP support will be needed for either the Christian Democratic Party of Merkel or its main opponent Social Democratic Party to form a new parliamentary government.

As for Russia, the experts see tumultuous times ahead here too for Germany. Despite the two nations’ collaboration on the Nord Stream 2 pipeline under the Baltic Sea which now directly links the two nations on direct natural gas deliveries, the Germans share general European angst over aggressive Russian actions in Eastern Ukraine and its annexation of Crimea. Furthermore, most of Merkel’s tenure has coincided with Vladimir Putin’s increasing resistance to any further integration with the West.

According to these experts, Berlin sees Russia increasingly as more of a spoiler than a collaborator.

Perhaps the UN won’t solve these problems. But bilateral diplomacy among the US, Europe, Russia and China will be essential if the progress the UN and Biden seek is to be atttained.