Alicia Wallace: Still Not Enough But The Women In Parliament Have A Real Job To Do 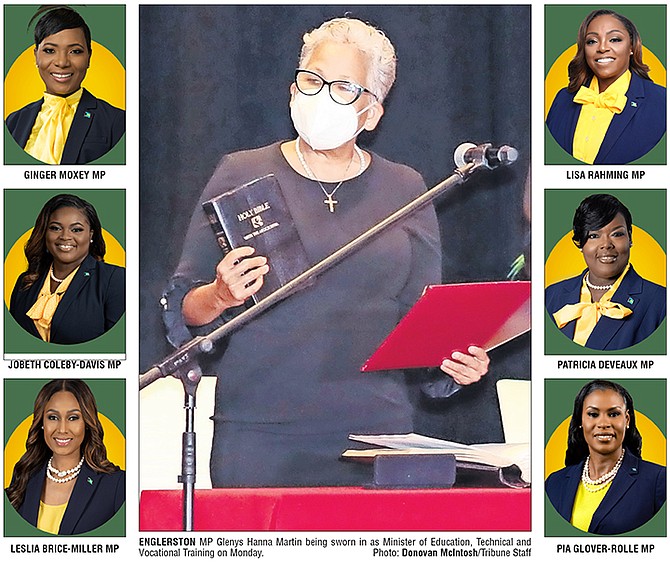 The general election came last week and brought many challenges with it, some of them noted by the election observers. There was not, in any of the reports thus far, enough attention on the disenfranchisement of voters. Many young people did not register to vote before the election date was announced as they were under the impression the election would be held in May 2022. People displaced from Abaco and Grand Bahama who intend to return home were unable to vote in their current islands of residence.

People were locked out of this important process — one many incorrectly believe is the only opportunity for Bahamians to have a say and participate in governance. Many people did not vote because they could not be sure it would safe to do so in the midst of the COVID-19 pandemic, especially after it was announced quarantined people would be allowed to vote in person. This should not be glossed over, especially when we had the lowest voter turnout in our modern history. Voter turnout is usually around 90 percent, but this time around, it tanked to 68 percent. Contrary to what some may posit, this was not simply disinterest in choosing the lesser of two evils, but inability to vote and concerns about COVID-19. Many decided that things would go on in much the same way as before, so why risk it? As low as voter turnout was, we now have a new administration.

Seven of the 39 parliamentarians are women. This is directly connected to the the Progressive Liberal Party and the Free National Movement each choosing to have seven women on their slates. Much like 2017, if the winning party had more women as candidates, we would have had a higher proportion of women in Parliament. It simply has not been made a priority, and that is to our detriment.

This number, seven (out of 39), is being celebrated by some as a great feat. In 2017, 13 percent of the parliamentarians were women, so the current 18 percent is an increase over the last time. In 2002, however, parliament was 20 percent women. In 1997, it was 15 percent women. We have gone up and down, and we have yet to reach gender parity in parliament. In fact, we are still a long way off from the 30 percent target set by various regional and international mechanisms. In addition to the failure to reach the numbers — a result of the failure of both political parties to commit to gender equality — we had to contend with horrendous representation by two people in particular who made outrageous statements condoning violence against women.

We need more women in parliament; more than that, we need proper representation by women who understand gender, care about women and are committed to the work to promote, protect and expand women’s rights.

The seven women elected to parliament need to know their experiences are not the only experiences. They need to be prepared to listen, learn from and act on behalf of women with disabilities, migrant women, women who are experiencing poverty, LBTQ+ women, women who are unhoused, women who have been institutionalized and women of many other backgrounds and experiences. Being one in the number is not enough. Being there and having a seat is just one step.

We have not yet seen all of the appointments to Cabinet. On Monday, nine people were appointed, and there was only one woman among them. If the seven women in parliament are more than optics to the party and the new Prime Minister, several of them should be appointed to Cabinet. The case there is the same. We need all Cabinet Ministers to seek the information they do not have, listen to the advice of experts and act with the people in situations of vulnerability in mind. How will this affect women? How will this affect children? What does this decision mean for people who are unemployed? How does this help the people who need it most?

We certainly must acknowledge there is a significant burden on women in leadership. They are judged harshly. When they are not deemed to be too “emotional” or “soft” they are accused of trying to be (like) men. They must not blend in with the men nor ruffle too many feathers. When they are not expected to be invisible and silent, they are often expected to take on particular tasks and to present certain points of view.

While we demand these seven women put in the work and raise the issues important to us, we must also call on the men to publicly support women in leadership. We need them to learn about the ways gender has shaped their own experiences and impacted their leadership and performance. Gender sensitivity training, human rights training, workshops on ratified conventions, need to be arranged for all of our representatives, and these sessions would certainly benefit them as they set about the people’s work.

We need a government that is for the people. We need the women and men who serve as our representatives to put us first. We have, over the years, learned to have low expectations. In fact, we tend to expect the worst. We need to watch this administration, like any other, and measure it not only against its own plan, but against the overall needs of the country. Demand that it is accountable to us. Encourage the Members of Parliament and Cabinet Ministers to be communicative with the public and be effective in their work.

The greatest violence againt women in The Bahamas is gambling. Gambling Self Management implies that 99.9% of Problem do not need Sandilands in-house treatment, but a basic understanding of gambling and recovery. The Gambling Harms are the same for Cocaine Addiction, the difference beingsubstance as opposed to behavior. The American Psychiatric Association ranks PG the same as Cocaine at DSM-5. Cocaine comes with lack of appetite resulting in weight loss, hyperactivity and much undesired Addiction Harms of social, ethetical, finacial andfamily crises. The Web Shops are full of women and because of Electronic Gambling on cellphone, access to funds electronically only hungry children, multy loans, destroyed families, abandoned vehicles and subtle prostitution. To leave no woman out, the rich and poor are paying a heavy invisible price. Our women are cognizant enough to Self Help PG through exposure to experience and literature. The firmer government allowed The Bahamas Gaming House Operators Association to set up the only PG operation but on their grounds. Proffessional treatment was made available, group is best but who wants their name out there when honesty matters. Melf Management showed the best wider ranging results during CPHA certifications study. Our females are imperiled then there goes the home foundation. All countries have a National Gambling Council that is funded by Gaming Houses to provide literature and critical advise. The former government failed our females and sidelined many to the Social Services as a final safety net for paying rent and food. Doctors Knowles and Christie, along with myself hosted a Sandilands webinar on PG. That government derives taxes from gambling more may be paid out to social Services, they are really in a bad position and unwilling so far to legeslate funding to educate women PG.