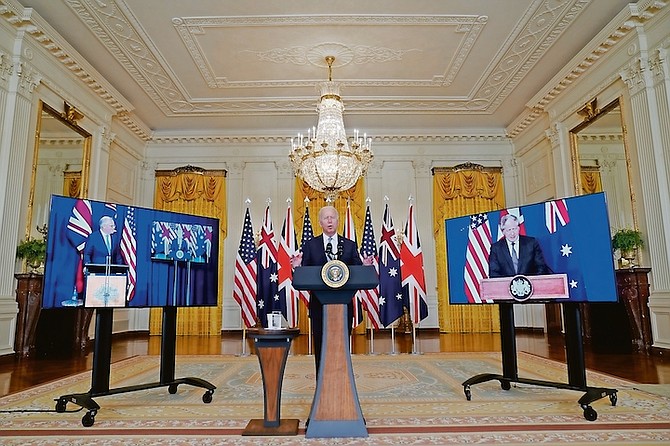 SUCH is the continuous news cycle in today’s world of instantaneous communications that what is top of the agenda today can all too readily be ignored tomorrow when it is overtaken by fresh events.

One important exception has been Afghanistan. After recent wall-to-wall coverage, last week’s Senate hearings - when there was almost total condemnation of the Biden administration for its ill-planned and poorly executed evacuation - have been carried extensively on TV. Similarly, the media has also fully reported the revelations about the recent drone attack that killed 10 civilians in Kabul. Having earlier insisted they were legitimate terrorist targets, the US military have now admitted it was a tragic mistake - and they still wonder why so many of their actions induce such hatred around the world.

However, the media has now turned its attention to a new cause celebre of huge global significance that emerged last week - a major defence pact which has precipitated a massive row among the Western allies.

At a virtual press conference on September 15 attended by Joe Biden and British and Australian Prime Ministers, Boris Johnson and Scott Morrison, the US President announced a ground-breaking agreement between the three countries called AUKUS. Under its terms the three nations will co-operate in the development of the first nuclear-powered fleet for the Australian navy.

The impetus for this is security concerns in relation to China’s increasingly aggressive moves and military expansionism in the South China Sea and the consequent need to defend the West’s interests in the Indo-Pacific region.

The historic trilateral defence and security pact will focus on military capability and is separate from the “Five Eyes” intelligence-sharing alliance which also includes Canada and New Zealand. It will involve sharing of information as well as co-operation over a range of issues and, specifically, the provision of the technology and capability to enable Australia to develop and deploy nuclear-powered submarines, though without nuclear weapons. Australia will become only the seventh country in the world to have nuclear-powered submarines which have a powerful deterrent capability; and Mr Morrison has said explicitly and firmly that the nation “is not seeking to acquire nuclear weapons or establish a civil nuclear capability”.

The downside or negative aspect of all this is the cancellation by Australia if its 2015 multi-million dollar agreement with France to supply 12 diesel-powered submarines. The French have reacted fiercely to the scuppering of this deal and, in the resulting diplomatic storm, they have recalled their ambassadors in Washington and Canberra.

Their government have strongly criticised the new pact and the way it was handled with great secrecy and no consultation, and have condemned Australia for reneging on its commercial obligations, describing it as a “stab in the back” - as well as other more colourful language which reflects the seriousness of the disquiet in France.

Australia had been a strong trading partner of China but relations became strained after it backed a global inquiry into the origins of COVID-19. Reportedly, it had felt isolated in the face of China’s growing military and economic aggression and influence in the region and had concluded the submarines it had agreed to buy from France were inadequate to ward off the threat posed by this. Instead, Australia needed nuclear-powered ones which were faster, stealthier and did not require regular refuelling - and overall it was seeking the heavier and deeper backing the US and the UK could provide in helping to preserve a stable and secure Indo-Pacific region.

For Britain, the AUKUS pact fits with the objectives set out in the government’s foreign policy review last March entitled “Global Britain in a Competitive Age”. The review recognised that while the US will remain the UK’s most important strategic ally and partner - and NATO remains the bedrock of defence and security in the Euro-Atlantic sphere - there was a need partially to shift Britain’s focus towards the Indo-Pacific region which was increasingly the geopolitical centre of the world - countries such as India, China, Japan and Australia among others which are home to a quarter of the world’s population and make up 40 percent of global GDP.

As regards the US, the timing of AUKUS is significant because it comes so soon after the country’s exit from Afghanistan which had raised doubts about American commitment in the region. This is not the place to examine the US’s broader foreign policy or its relationship with an ally like France, but AUKUS demonstrates a combined stance in facing China as a threat to the Indo-Pacific region which has enjoyed 70 years of prosperity, including that of China. It is also a further indicator of America’s support for countries in the region like Japan, South Korea and Thailand.

Predictably, China has reacted strongly, saying AUKUS risked “severely damaging regional peace… and intensifying the arms race” while Taiwan has welcomed it as a response to China’s new aggression. The pact is also significant in so far as it shows the US and UK are willing to export nuclear technology in this way to a trusted ally.

China’s expansionism is currently the biggest threat globally to Western security and it is reassuring the US is still prepared to engage seriously in the Indo-Pacific region. Whatever the difficulties last month in relation to the lack of consultation with the US’s allies over the withdrawal from Afghanistan, the rest of the free world needs such American engagement - and AUKUS is a step in the right direction.

What happens to the election loser?

Following last week’s general election, it occurred to me it might be interesting to look at the procedure - under the Westminster system of government - for the losers.

From researching the issue, it appears there are no clear rules about the position of outgoing incumbent Prime Ministers after they have stepped down. As a statement bordering on the obvious, the leading UK think tank, the Institute of Government, says that, if an incumbent PM wins an election, then he (or she) simply continues in office, and, if an election produces a clear majority for another party, then its leader becomes the new PM.

The incumbent PM formally resigns the morning after the election, though nothing is said about losing PMs stepping down from their party leadership which should be a matter for the party itself.

Britain does not have a written constitution in the sense commonly used around the world which means there is no single document setting out the structure of government and its relationship with its citizens. So the nation relies on constitutional conventions. PMs are appointed based on their ability to command the confidence of the House of Commons, and this power to appoint them is one of the remaining prerogative powers of The Queen who is normally advised about who can command that confidence. But there is no suggestion a PM can be forced to resign as party leader after losing an election. There is also, of course, the issue of outgoing PMs continuing to serve as an MP if they retain their parliamentary seat.

As a point of historical interest, there are numerous instances of PMs resigning because of a particular issue. For example, Anthony Eden was forced out in 1957 after the Suez debacle and, much more recently, Margaret Thatcher had to resign as PM in 1990 on the advice of her own cabinet because it was considered she no longer enjoyed the support of the Conservative Party. In 2016, David Cameron chose to resign after he had campaigned for Britain to stay in the European Union but “vote leave” won the 2016 Brexit referendum. Then, in 2017, Theresa May resigned as PM after losing the confidence of the Conservatives over her handling of Brexit but continued to serve as an MP.

It is also interesting to note how some leaders of the opposition have reacted to losing an election. Ed Miliband, whose Labour Party was defeated in the 2015 election, famously said “I take absolute and total responsibility for the result and our defeat at this election” and he stood down as party leader. In the 2019 election, when Labour again suffered heavy losses, Jeremy Corbyn said immediately after the election that he would remain in his post as party leader while all concerned reflected on the result but would not lead the party into another general election. This triggered a leadership election which was won by the current leader Keir Starmer. But Corbyn stayed on as an MP after retaining his own parliamentary seat.

Earth savers on our own doorstep

In London last Friday, Prince William unveiled a shortlist of the first-ever 15 finalists for his ambitious $75 million global Earthshot Prize to help repair the planet over the next 10 years - and what a pleasure it is to report the wonderful news that a Bahamian group is among those finalists.

Reportedly, the Prince has been working on this project for the last three years. He was persuaded to launch it because of what he saw as the constant negative headlines and pessimism in connection with climate change, and his purpose was to inspire specific action beyond what governments were doing.

The Earthshot Prize initiative is designed to encourage innovative solutions to the world’s greatest environmental challenges. It is divided into five different categories and Coral Vita based in Grand Bahama has been chosen as a finalist in the one listed as “Revive our Oceans”. The 15 finalists have been chosen out of 750 nominations in a rigorous screening process. Of these, five winners will be selected and will receive some $1.4 million in prize money while all will receive tailored support from a network of private businesses around the world. The winners will be announced next month.

A look at its website shows that Coral Vita’s teams are working to restore dying and damaged reefs. Based in Freeport, it was founded in 2015 by environmental entrepreneurs with a passion for preserving coral reefs.

Coincidentally, I spotted recently a new study, led by the University of British Columbia, about the importance of coral reef systems. This study found that coral reef cover around the world had diminished in size by more than a half since the 1950s due to climate change as well as overfishing, pollution and other human impacts. It went on to warn that the continuing degradation of global reef systems will threaten the well-being and development of coastal, reef-dependent communities.

So there can be no doubt about the importance of Coral Vita’s work – and others will surely join me in congratulating them on being chosen as one of the finalists for the prestigious Earthshot Prize.

Unfortunately, the Biden administration is not in any position to lead and unite against the Communist Chinese. President Biden has demonstrated to the World that he is a feeble and weak leader, who is incapable of anything but failure. His recent Afghanistan disaster is evidence enough that he cannot be trusted by the NATO allies.

It appears that American voters are having "buyers remorse", and with 3+ years left with a confused and incoherent President in place, it is increasingly hard to believe that the United States is capable and prepared to engage seriously in the Indo-Pacific region.