Rolle: Dozens Of Abaco Residents Will Be Given Permanent Jobs 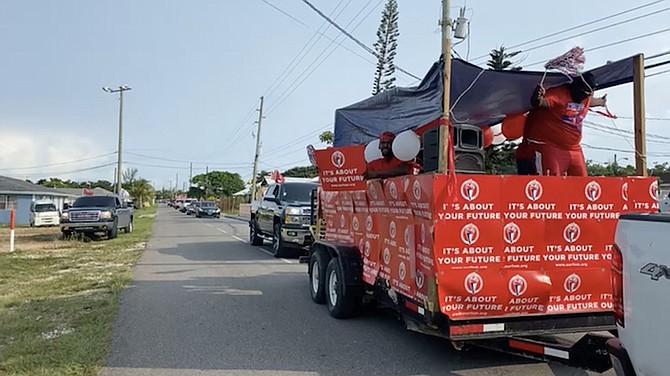 Mr Rolle said: “Every single day for the last few weeks Darren has been coming to me and saying to me, minister, where are my letters? Where are my people? And I can announce to you with pride that every single one of you who worked well, who did your work, is now fully employed in the Ministry of Public Services and national insurance.

“I know some people may say from the other side that this is a political move but we say to you it’s about your future. We are committed to you. We said this from last year that if you did well and you did your work, we will make sure that you fill the vacancies in the Ministry of Public Services and National Insurance and all 85 of you who are on my register, you will get your letters, we have printed them, they should be with your staff.”

“Darren is a good man,” he said. “He has a good heart. You saw his courage and his leadership during Hurricane Dorian. Darren has been faithful to you,” he said. He was here with the people of Abaco during the crisis, leading the way on the ground in difficult times. He has been a valuable member of my Cabinet. He has constantly brought good advice and care for the Bahamian people, and especially North Abaco.”

“We have done much work, but so much more is needed. If you reelect Darren and the FNM you know we will keep fighting to get you back to where you were on this island before Dorian, and even better.”

Dr Minnis said, if elected, the government will create an Extended Disaster Recovery Programme for Abaco that will apply to the hardest hit areas.

He said: “The Extended Disaster Recovery Program will include a further extension of the Special Economic Recovery Zone concessions. Further, we will earmark a specific portion of the Ministry of Social Services’ budget to the needs of Abaco.We are going to expand the existing Small Business Development Centre on Abaco. In particular, we will allocate resources and add more business advisors to work in tandem with the Chamber of Commerce to see that entrepreneurs on Abaco succeed.”

LOL. People is still fall for this nonsense?

Now we see how the public sector becomes so blotted, days before the election, this the same man who upon taking office fired thousands at NIB saying it was blotted, promises, promises they are a comfort to fools, and so all who fall for these promises are just that fools.

The COI has the FNM on the run and talking out of their heads!

If this isn't attempting to buy votes....

I happen to know that the promotion exercise was something in the works for about 3 to 2 years now!! The FNM attempted to "clear out" all those promotion that "got stuck" in the maze call public services. I had some family members who got "plenty" promotion. . .thousands of them in the last year or so that we heard nothing about!!

I did my checking and found out that there are hundreds more still in the pipe line. . .possible being hold up by PLPs to "stop votes" for doc or the FNM hold them up themselves to use as "hostage" so that public servants "will have to vote for them" if they want their promotions. . .they know that the PLP are not good for promotions for anybody who are not PLP!!

A "little birdie" in one of them unions says: "they holding up on letters" for promotion approved months ago. Why are they doing so? Nobody seem to know!! The unions them are "clammering" to get a deal with the government before a possible PLP government. . .them PLP are not goOD for "dealing in good faith"! Workers don't want much to do with them!!

But I must add. . .Mr. Rolle did look "a lil amatureish" on stage "playing" like they "just gee" them workers their promotions!! Them promotion are "old news". . .possibly to have greater "affect" on voters buying just before the election!!

Mr. Rolle says "heen tryna buy votes". . .but it sure as heck looked so ta me!! Even though I know them promotions are long before this election even was in the cards, so to speak. . .the man looked like he was "baitin" voters!!