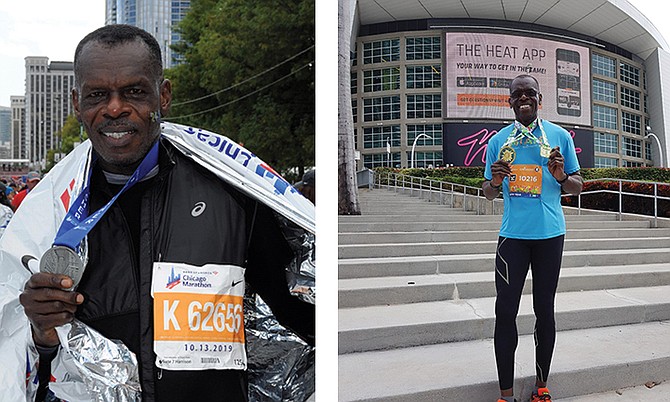 CHARLES Johnson has been competing in marathons from the age of 55.

FORMER Bahamas Road Masters president Charles Johnson, with more than 30 international marathons under his belt, will be heading to Germany in two weeks as the lone Bahamian competing in the in-person Berlin Marathon.

The 26.2 mile run, one of the first major races to be staged on site since the beginning of the coronavirus pandemic in 2020, is scheduled for September 26. It’s one of the six major marathons around the world, in a list that includes New York, Chicago, London, Boston, Berlin and Tokyo.

Having ran the New York and Chicago Marathons twice and London, Boston and Tokyo once, the 65-year-old Johnson said this will be the first time he would get to participate in Berlin as he adds the last of the top marathons in the world to his resumé.

“Running is really a pastime for me, but when you are running a marathon it is a real commitment,” said Johnson, a 48-year veteran in the insurance industry. “It’s a lot of training. You can’t just go out there and run a 26.2 mile race unless you are fully prepared for it.

“Most marathon training programmes are stretched over a 12-week period where you have a very structured programme in place where you are running four to five times a week at varied distances to get your body in readiness for the 26 miles.”

Known as a late-bloomer from Andros, who got started at the age of 55 at his first marathon, but has never competed in one at home, Johnson said there are times when a runner can “hit that wall” and their legs “just won’t want to go any further,” but it’s only a person’s mind that will take them through to the finish line.

“Training for a marathon in The Bahamas is usually a plus, running in a cooler climate,” said Johnson, who began running after he made the transition from playing squash, golf, softball, but even at his height of 6-feet, 4-inches, he never ventured into basketball.

A weightlifting fanatic, he noted that after running the beach with some friends, he decided to test his skills at long distance running and hence the interest grew in marathons. He said he just got an appreciation for running marathons because of the benefits that he’s derived from it and the lasting friendships that he’s been able to develop over the years.

It was at the age of 54 that he got his introduction to running his first marathon. But he admitted that one of the early mistakes he made when he started running marathons was to switch from the shoes he trained in when he brought a new pair to compete in his London marathon.

“It felt good for the first 15 miles, but after that, it just brought me down and my toes were literally on fire, blistered and everything, but I had to finish. So you really have to be mentally strong,” he remembered.

“This is why a lot of people running marathons find it to be a lifelong lesson because it’s taught us never to give up. You may not be going as fast as you want and you may even have to walk and even crawl, but eventually you will cross the finish line.”

Johnson’s first marathon was at Niagara Falls in Buffalo where he produced his lifetime best time of four hours and 30 minutes. He travelled with a number of his training partners from the Bahamas Roadmasters, the club for local roadrunners that he headed as president from 2012-2016 when he helped to establish the Bahamas Half Marathon

Since that initiation, Johnson said he’s been able to post times that were ten minutes within each other, even though it starts to slip as he gets older, but he’s accepted it and still keeps on ticking as he looks forward to the next challenge.

In 2014 when he went to Tokyo, Johnson said he encountered a language barrier, but he got a better appreciation of what it meant to be competing overseas as the organisers carried their instructions to the letter.

He found it out the hard way when he tried to go into the calling area with a water bottle that he always used for marathons. At the time, he tried to go through with the bottle, but was denied by an official, who spoke in Japanese.

“I didn’t speak the language, but the way the guy spoke, I really thought I had committed a major crime,” he recalled. “He just pulled the water bottle out of my hand and threw it into the garbage and I realised that I had broken the rule.”

But on the route of the marathon, Johnson said the fans on the sidelines were very accommodating and they provided spray for the knees of every participant or they shared fruit or water to keep the competitors hydrated.

On just about every marathon he competed in, Johnson said he found that competitors, who hardly know each other, would assist by giving each other prep talks or they encourage each other to continue to press on, even when they seemed to be giving up.

He considers it a fraternity, but one that leaves cherished memories even if they don’t remember who the person or persons were who helped them along the course because in most cases, because the number of competitors are so large, they don’t have the time to get to know each other formally.

As he prepares to leave on September 21, Johnson will be traveling with his wife, Eunice Johnson, another marathon runner, who will not be competing, but will be there to provide moral support for him on the sidelines.

While he normally goes to the Cleveland Clinic for his annual physical and has been given a clean bill of health over the years, Johnson said he normally prefers to go and run the marathons, in most cases self-sponsored, because it’s about the same or less than what most persons his age would pay for their medical care if they are not physically fit.

“I get to enjoy myself, see the world, meet new friends and establish some new relationships,” said Johnson, who is nearing retirement age.

“I would like to do the three. It’s possible. But I will have to see how things go when I leave Berlin.”

Johnson, married for the past 43 years with three children and a grandchild on the way, has been a Senior Manager at JS Johnson for the past 27 in an insurance career that has afforded him the opportunity to travel around the world, just as he did with his marathon running.

Apart from running, Johnson has served as the fifth District Grand Master for the Bahamas, a position that is now held by Anthony Bostwick Jr, who is now the seventh Grand Master. In his capacity, Johnson said he also got to travel around the world where he was able to take Bahamian masonry as far as Ghana, Nigeria and Kenya, Africa, Malaysia, Singapore, Bangkok, Scotland, Canada, the United States and the Caribbean.

“I try to fill as many roles as I can that can be beneficial to the Bahamas,” he said. “That’s is where I get my gratifications from. Running is something that I enjoy doing, but there is a lot of other stuff that has been going on with me along with the running.”

The Berlin Marathon next month is just the latest achievement that will be a feather in his cap.