A Comic's View: It’S The Silly Season - But Dead Voters? 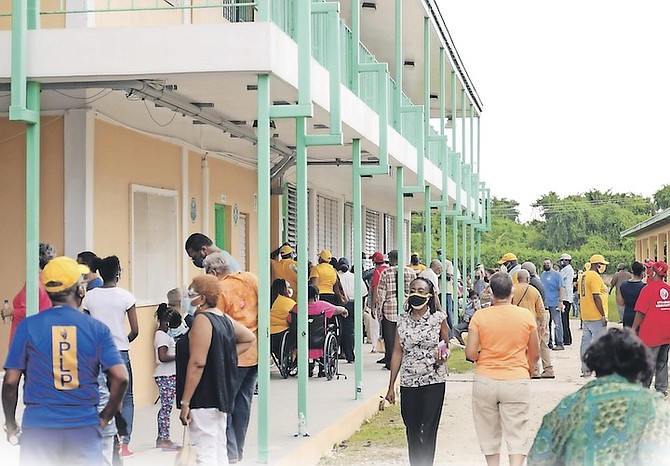 THIS may be the “silliest” of “silly seasons’’ in the history of our nation.

If you listen to the multiple “attack adds” “fake news” and “conspiracy theories’’ on multiple social media platforms, produced by multiple political parties, both big and small. One could easily end up in a serious state of depression in regards to the next administration for our nation.

As tensions heighten leading down the home stretch and toward the finish line on September 16th it’s clear we as a nation and voting populous must take a step back, exhale and remember we all go back to being Bahamians on September 17th and the global COVID-19 pandemic will still be looming over us all despite who the next administration is.

In fact, we should all have a good laugh at ourselves for some of the political foolishness and numerous conspiracy theories (later proven to be false) some among us have swallowed hook line and sinker.

Recently there have been numerous reports regarding “dead persons” on the fixed ballot potentially voting.

I would just like to remind all the potential “dead voters” that before you think about voting for any local political party, take into account the plight of The Dead Democrat Voters of America (DDVOA).

A staple of the Democratic Party since the days of Kennedy, the DDVOA has been instrumental in the party’s success, allowing the Dems to continually undermine Republican ideals like fiscal responsibility, individual bootstrapping, and acceptable forms of hate speech.

Surely US President Biden cannot continue to forget about the hundreds of thousands of deceased voters who provided him with victories in such key states like Pennsylvania, Georgia, Michigan, and Arizona.

Thanks to recent accounts from Gypsy princess, Ethelinda Esmerelda, a psychic medium to the stars, who had a counsel with some of Biden’s deceased supporters via Zoom and a Ouija board.

Finally the world would be able to get in a first hand account from deceased voters like Sarah Bethingham, a Montgomery County, PA resident who died of typhoid in 1922 and voted for Joe Biden in 2020.

“When other spirits told me Biden was going to finally give me the representation I deserve, which included healthcare for my pre-existing condition and access to a Netflix account, I thought, ‘eh, why not? I’ve heard good things about The Crown.’ But here I am, a year later, and I still don’t know what happened to Queen Elizabeth.”

Then there’s the case of Bernard James a ghost who is currently stuck haunting The Kennesaw House in Savannah, Georgia that is home to seven hundred other spirits.

For the last ten elections, Democrats have promised us that we would finally be able to relocate. But then the results come in, and we don’t even get a thank you. I was promised a house by the Chesapeake and an Instagram account dammit.”

I will leave you local “poltergeist” to decide amongst yourselves as to who your next PM and government will be.

I’m off to debunk the other bit of hot fake news, you know the one about ‘secret apartments’ in the ballot boxes.

‘LET YOUR CONSCIENCE BE YOUR GUIDE’

Until next week, we amongst the living all know about politicians who make sweeping campaign promises with no intention to follow through once elected.

We also know supporters of local political parties will regurgitate anything to promote their party and influence voters.

Consider the source in regards to all the noise in the market.

Quietly examine any literature produced by the various parties and vote for the one that resonates best with you.

Your choice is personal and your vote is between you and God.

All the proper election safeguards as far as voting and a fair election and election process are in place.

Additionally all the proper social distancing protocols will be in place as if all voters had tested positive for COViD -19.

There is no reason for you not to be able to vote, so exercise your right respectfully, quietly and most important wisely.