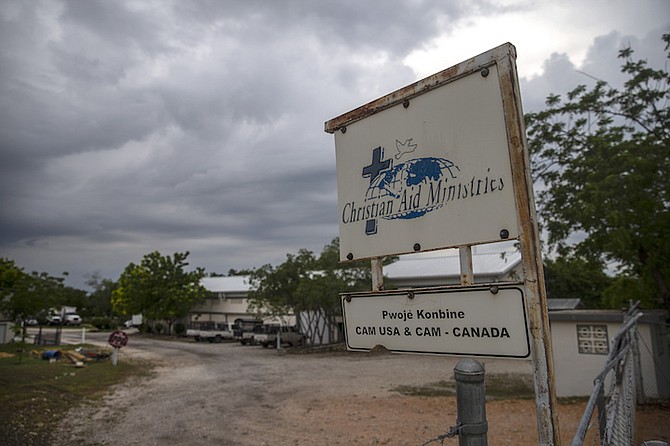 FOREIGN Affairs Minister Fred Mitchell spoke on the safety of the Bahamian diplomats in Haiti after international media reported the kidnapping of American and Canadian missionaries in that country.

The Ministry of Foreign Affairs had previously announced that diplomatic staff posted to the Embassy of The Bahamas in Haiti returned to Haiti on Sunday, October 10, and have resumed normal operations.

Mr Mitchell said: “Well right now as I understand it, it’s not permitted to travel to Haiti back and forth, although the unlawful irregular migrants don’t seem to let that worry them, but there’s been no change in the travel advisory (banning travel).

“The problem is that there are Bahamians who’ve been stuck in Haiti since February and they need to come home and I think we have to actively work on trying to change that to go back to the status quo.

“In terms of the embassy, the embassy is open again. The latest information I have, we had a team from the Defence Force go in advance to see the security situation, it appears to be okay, but it’s watched all the time and we’ll do everything we can to ensure that they’re safe and if there’s any problem we’ll pull them out.”

16 American citizens and one Canadian were kidnapped by a gang in Haiti on Saturday.

He said: “We’ve got a sign off over the last week because you know the prime minister has to do that under article 112. So first we’ve got to have... agreement from the other side for the people we nominate. Once that’s done, we’ll make the announcement but should be shortly, within a month if not weeks.”

Asked if the diplomatic appointments will be new or familiar faces, he noted it will “be a mix of both”.

Persons at the Bahamas embassy may not be safe.

You mean hire them, let them squat on our land, let them use our health care, give them free education etc? Sounds good.

Im aftaid that if we get anywhere near to food shortage in this country we will have armed maurauders in the streets. Bahamian and Haitian. Because we've allowed inner city problems to fester while we moved out west to get away from "poor" people. A mass of hungry people will turn into the zombies of the movies, walls and security systems dont stop them. Thats my Alex Hailey plot, thats what we need to be working to protect this country against. And by working I mean addressing illegal immigration, addressing disenfranchised people, addressing people who cant read, skills retraining for upward mobility, eradicating corruption in govt ministries so money can flow properly and sharing the wealth

if we treat the Haitians that badly, do you think that they would be risking their lives for more than half a century, just to get here?

Things must be just that bad there.

@pablojay, the Haitians come for economic reasons not for the “brotherly” love extended to them by their black Bahamian brethren. In this country they are reviled, robbed, economically exploited and for the most part completely marginalized. Ain no one is treat black people worse than other black people.

Spoken like a real Uncle Tom that doesn't know anything about his history! Haitians are their worst enemy and if YOU don't understand why too bad for you!

Mr Mitchell said: “Well right now as I understand it, it’s not permitted to travel to Haiti back and forth, although the unlawful irregular migrants don’t seem to let that worry them, but there’s been no change in the travel advisory (banning travel).

Idiot. It's us who need to be worried, not them. They're invading our country, we're not invading theirs!

"latest information I have, we had a team from the Defence Force go in advance to see the security situation, it appears to be okay"

Listen when you have a country where kidnappings are normal, nothing is ever "ok". Unpredictability is the rule of the day because you can never know what someone with water in their bed plotting while you asleep. The situation could turn in a dime. No advice, God go with you. *seriously*. They strangled a 5 year old girl when her mother couldn't pay a 4000 dollar ransom. I suspect hellfire will rain down on them if they harm one of those Americans though

I disagree with your "hellfire" suspicion. To the shock of the world, the US government and US military recently demonstrated their willingness to leave US citizens behind with the enemy when they fled the battle field in Afghanistan.