Rehiring The Retired? They Get Salary Plus Pension

THE Davis administration will allow retired civil servants who are reengaged by the government to simultaneously receive their salary and their pension, a shift in policy from the Minnis administration.

A memorandum seen by The Tribune says Cabinet has “agreed that the present policy position which does not allow reengaged public officers to retain their pension entitlements be rescinded.” 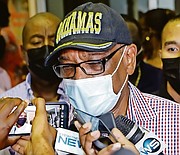 Asked for a response, Fred Mitchell, minister of foreign affairs and public service, said yesterday: “The government’s advice is that someone’s pension is earned and you cannot lawfully deny them the pension. If you bring someone back, you seek to pay them what they are worth and what they agree to. The snipes from the sidelines by the former prime minister do not justify the pay which he gave the chosen few in the face of and contrary to his own policies. He is not credible.”

Mr Mitchell noted that the administration’s policy on the matter is the same as it was during previous Progressive Liberal Party administrations.

“…It was not we who reversed course,” Mr Mitchell said.

Dr Minnis said the policy change is a “slap in the face” to younger people currently in the system.

The new administration changed its policy, he claimed, “to facilitate their old cronies”.

Former Public Service and NIB Minister Brensil Rolle announced in 2017 that retired civil servants who are re-engaged will have their pensions stopped in order to “unclog” the public sector.

He said this was the policy of the last Ingraham administration.

“For example,” he said at the time, “if your pension is $50,000 and the position that we’re offering is $70,000, we’ll pay you the difference as opposed to someone getting a salary and a pension.

“The primary reason why we are doing that is to not only add some structure to the public service but to make sure those persons who are talented in the service would get an opportunity to be promoted.”

There is no hope that the PLP will reduce deficit, please, please let the IMF restructuring happen as soon as possible.

I agree with this principle. If you can work, if you have the experience and critical expertise, you should have the opportunity. Age should not be a delimiter to employment for the able mind and bodied. On the other side, there is also a huge risk that this could be abused and used to bring back dead weight just to reward party faithful

This battle between you too young wait your turn or you too old go home is a construct developed by lazy leadership incapable of expanding the economy to provide space for everybody. For 50 years. If you think about it, its mind boggling. They cant think about growth strategies so what do they do? They make you think them other people is the problem. They gat "your" job. Dr Minnis was the chief offender pandering to young voters

This is absurd! It is so obviously being done for the sole purpose of bringing back those who are needed in key positions to help facilitate the re-establishment of corrupt practices and schemes that existed under the previous Christie led PLP administrations.

If a person retires they retire. How the hell you let them retire and bring them back and pay pension and salary?

NIB doesn't let you collect NIB and be working a job.

NIB doesn't let you collect NIB and be working a job. So, there are two standards. One standard for the lower class and one for the upper class.

Not true .You can retire continue working and still collect pension from NIB. Its just that most employers require you to stop working not NIB.Call NIB dont take my word for it

Soooo sooo tired of this. So hundreds of older persons around the country, including my parents, cannot collect NIB and work a job. But these people can? So Tribanon, Moncurcool and Bahamianson, I imagine you are older than me. Besides complain, complain what can be done?

You need to call NIB . If they are over 65 they can, AND THE EMPLOYER NO LONGER DEDUCTS. But NIB no longer pays sick pay. But many people do not know. I one told a guy and he thanked me later.

We have to be the only country in the entire world that thinks people over 65 have nothing to contribute. Where did we get this. People over 65 are running the American Economy... I mean at the top. How old was Alan Greenspan?

"the Maestro for more than 18 years at the helm of the Federal Reserve. Mallaby does a great job telling Greenspan’s story, including his eventful pre-Fed years—Greenspan was 61 when President Reagan appointed him to the Fed"

so he was 79 when he left? 79!! and he was heading the American Federal Reserve. And there are so many other examples of the top economy in the world using their wise and experienced older people to help them grow then expanding to provide jobs for younger persons. Thats the way its supposed to work. But Dr Minnis gets there, doesnt want anyone challenging him so he removes all the "old" people and puts in "young" people who will not ask questions and hero worship him.

Y’all asked for it by voting for this bunch of crooks. When you retire, you retire. If you come back to work it means the age of retirement is extended. And it means you are no longer retired and deserving of a pension. The additional years you will work will be added to the years of service used to calculate your pension when you FINALLY RETIRE. It is reprehensible to conceive of a situation where someone earns a pension and a salary from the Public Service at the same time. You cannot have it both ways.

Say what you want about Dr. Minnis and his administration at least they had the logic of public service equity down correctly.

What else can we expect from this Government. An Ambassadorial post for former Minister Gibson with the logic being he was not convicted of anything therefore his hands are clean.

Friends, family & lovers ..... PLP all the way. This is disgraceful.

@sheeprunner12.Both major political parties do it. Let Dr. Minnis tell you how much Marlon Johnson was being paid? Or better yet ,let him talk you about the wife of an FNM party official who is employed at NIB. She has no real experience in the area she is employed.

I kinda have a split on this one. . .I just een know about this one! Fred is so right. . .dec een credible on this issue. . .he did a lot of that during his government!! Now the PLP is the government. . .they have the "people mandate" to make rules them. . .just like doc them did when they were government!!

Doc een gat no "leg to stand on" here. . .it was the same way them PLP felt when doc was doing hie thing!! This one een working for doc!!

If you worked long enough to earn a pension in the civil service, move on and give your expertise somewhere else. Make way for the next generation. Simple

The gravy train is making the rounds I see.

That pension is soon going to be worthless if spending is not contained. Let me know how useful them couple hundred dollars will be when devaluation/hyperinflation kicks in.

Frustratedbusinessman@ you are 100% correct. 48years of ignorant governance is going too catch up with this country in short order, more debt more debt until the government denied credit. No government of the Bahamas ever funded it's own budget without borrowing, nor have any place $1 USD or $1 BSD on the national debt without borrowing. I give these ignorant politicians 2 years max the government will default. Hiring old hags at the expense of young people won't matter when central bank start printing $500, $5,000, $10,000 Bahamian notes, an it cost nearly $500 BSD to buy two beef patties. I would believe a donkey from one of those farms on Long Island before I believe a word; any politician has to say from any political party in this country. Only the Lord could save this country and the world not men.

Have to say I agree with PLP on this. A person earned their pension and if you want them to work again, they should be paid. One has nothing to do with the other.