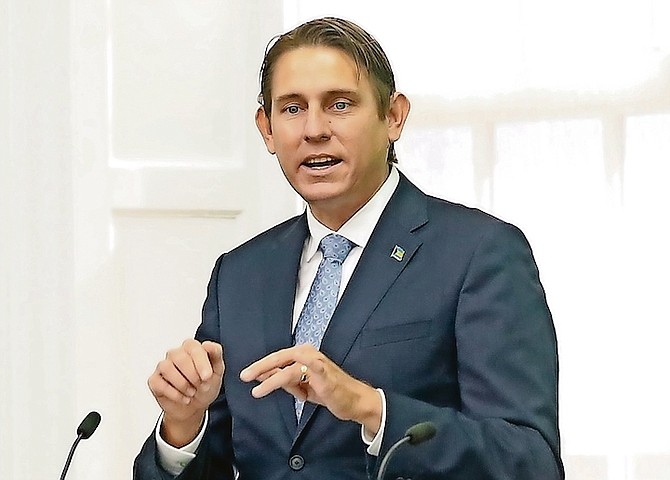 I AM intrigued by the situation surrounding Mr. John Pinder, Progressive Liberal Party (PLP) MP for Central and South Abaco.

Apparently, right up to the door of the last elections, Pinder was a dual American and Bahamian citizen.

He claims he was never really ‘American’ American, but the jury is still out on that.

For one thing, Pinder is from Abaco. And no offense to Abaconians, but we know how ‘yinne’ go. (That goes for Grand Bahamians too.)

Also, did he ever possess a US passport, specifically after ‘coming of age’?

Has he ever been to a Waffle House, and is NASCAR his favourite sport?

There are so many questions.

In his defense, Mr. Pinder claims to possess a ‘document’ dated July 29, 2021, proving he has renounced his United States citizenship and is now solely a citizen of The Commonwealth of The Bahamas.

Considering the former administration called for Pinder to renounce his US citizenship to comply with Bahamian law before the last general election, there has still been no physical proof presented to the public. Mr. Pinder, the parliamentary secretary at the Ministry of Tourism, Investments, and Aviation, hasn’t bothered to show us he is indeed only playing for ‘Team Bahamas.’

His lack of ‘transparency’ speaks volumes of both Mr. Pinder and the ‘document.’

PLP chairman and Minister of Foreign Affairs and Public Service, Mr. Fred Mitchell, made the following statement about Pinder’s citizenship when questioned by this newspaper:

“The party believes that John Pinder was duly qualified to be elected to office and has been so elected per the laws of The Bahamas, I cannot comment on the US document or its laws.”

That was fascinating wording there from the man in charge of passports. Especially since his position (kind of) requires him to be at least a little familiar with those laws, particularly where dual citizenship is concerned.

Now we all know some strange rumors were circulating during the election campaign attached to certain candidates (both old and new), so some may ask, ‘what is a little case of dual citizenship?’

But I wonder, was there not a vetting process in the PLP?

For example, I can ‘say’ you are Alfred E. Neuman’s doppelgänger (the pictures don’t lie), but I don’t have the paper to prove that.

As I waited for Mr. Pinder to produce the ‘document,’ I decided to do as the intrepid journalist had and check federalregister.gov for the US Quarterly Publication of Individuals Who Have Chosen to Expatriate.

Last posted on November 15, 2021, it contains the name of each (former) American who had renounced their United States citizenship for the quarter ending September 30, 2021.

Guess whose name wasn’t on it? Mr. John Pinder.

Pinder’s flimsy, wishy-washy response when initially questioned on his dueling loyalties by the reporter was dripping in political naïveté:

“The date was July 29, and it was done right after my ratification as the PLP’s standard-bearer for Central and South Abaco. I’ve sent the pertinent information to the Minister of Foreign Affairs this morning and the DPM some time ago. July 29 was the day it came back from Washington, DC, with the official stamp on it.”

“Three months from then would be August, September, October. It was no doubt included in the federal list previous to that. Renunciations are very, very rare. I’m surprised there is even a list on it.”

That’s a lot of words to say, ‘yinne don’t get in my private business.’

Why is Mr. Pinder stalling on releasing the document?

It’s bad enough that it took Pinder up until the eleventh hour to sever his ties with Uncle Sam for a chance to hug Her Majesty and serve in her parliament, but to see him still playing games with his reputation on the line is a travesty.

Produce the document, Mr. Pinder, and show your citizenship receipts. Taking the Neuman stance of ‘What me, worry?’ will not make the questions disappear.

By holding up the information, you are setting yourself up to be the first resignation of this ‘New Day’ PLP administration. That is if our ‘Foreign Affairs’ guy ever figures out what our constitution says about being a ‘Bahamian’ parliamentarian.

And if you don’t want to listen to me, then listen to your doppelgänger Alfred E. Neuman’s words of wisdom: “Silence isn’t always golden; sometimes it’s just plain yellow.”

MR Pinder does not have to do anything to please Mr Jack daniels;

Is he trying to do to Mr: Pinder what Donald Trump did to former President Obama? Folks missing from the LOONEY Famers Jack Daniels does not help. real medication is required

Naughty, you funny bey, but I know you're a comedian. I have to comment on the above article because you seem to be pushing a small story in a big way. And the Alfred E Neuman thing, yes, it's funny, but only once.

"He claims he was never really ‘American’ American,"..... having lived in Abaco for 95% of his life I would agree with this, he's probably more 'Bahamian' Bahamian

"His lack of ‘transparency’ speaks volumes of both".......the PLP and the FNM

and anytime an MP drops a phrase like "pertinent information" hold ya nose because they talking shit.

" And no offense to Abaconians, but we know how ‘yinne’ go"........ no, how do we ''go''? Do you mean that we're ''fiercely independent'' (we are until we line up like sheep and license our cars, boats and businesses, sending untold dollars to Nassau, only to have it disappear. Again)

You're making a big deal out of a small issue, if you have doubts about Mr Pinder's allegiance, let me fill in a blank for you. John Hubert Wellington Pinder the first is "the last surviving Loyalist" and has been since birth and if you don't think that this rubbed off on JHWP 2 you'd be wrong. Please stop worrying about a "paper American" and focus on more serious issues....or not; you're a comedian after all.

So is he now still a US citizen or not?

Okay! That’s all I want to know. Dude wait to the last minute to renounce and round here with these fools talking fool. Just show where you ain’t no more American cause all this running on making it look like this bui hiding something. He too old for this. SMT.