A Comic's View: Why Did We Lock Her Up? 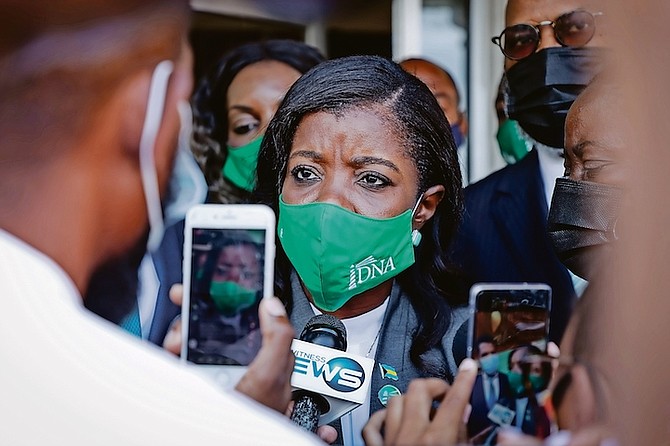 This week, ‘‘lock her up’’ became our reality.

Yes, apparently, we did lock her up! The Democratic National Alliance (DNA) leader, Arinthia Komolafe – along with top members of her party— was taken into custody by the Royal Bahamas Police Force for several hours on Monday.

To say this was a shocking turn of events is an understatement.

When we first heard Trump and his band of merry-men chant those famous words at rally after rally back in the day, we laughed. Surely a mature democracy like the United States would never stand for political vengeance to be wrought (unjustifiably) on a political opponent, right? That’s the stuff of banana republics.

It turns out we are that banana republic. We did what even Donald Trump, in all his lunacy, dared not do.

According to Commissioner of Police Paul Rolle, he was the person behind Arinthia Komolafe and other DNA members being ‘‘invited’’ by police to assist in their investigation of an unlawful assembly outside parliament on March 3rd. The Commissioner, who insisted that he does not take ‘instructions from politicians,’ held a press conference the day of the detentions to assure the public the arrests were not political.

Then the minister of national security – a politician – spoke.

According to Marvin Dames, what “had happened was” the DNA tried to stage a “Capitol Riots”-like insurrection to take over the Parliament of The Bahamas. Officers were ‘‘injured,”’ he said. The media was complicit in not covering these events, he insisted.

Except, according to all public records available, no such thing ever happened.

The minister, who gave an impassioned (read: angry) briefing to the press, seemed genuinely perplexed that Bahamians were up in arms about a line crossed in politics. Mr. Dames, during his statements, tried to deflect towards legitimate crimes Bahamians should be upset about, not realising that the public is genuinely mad about those things too.

The man doth protest too much

He (and Attorney General Carl Bethel) failed to acknowledge that in arresting Mrs Komolafe and her team, our country crossed a line that had not previously been crossed; the arrest of a government opposition party on frivolous charges.

I say frivolous only because Mr Dames’ intervention in speaking on the matter reeks of political manure. The Prime Minister, Dr Hubert Minnis, has stayed quiet on the subject, probably because he was surprised, too.

Imagine being a Prime Minister who made your bones and was swept to a historical electoral victory on the backs of the ‘‘marchers’’ and ‘‘protesters”. It doesn’t take a genius to figure out that he would know, politically speaking, that arresting an opposition party on ‘‘unlawful assembly’’ charges is a no-go.

After all, he did not have to answer questions for doing the exact same things (and more) that his hand-selected COP now insists is investigatable. This is why I find the typical talking points of ‘‘Doc’’ being involved in Mrs Komolafe’s arrest unbelievable.

What has elevated this unfortunate situation is the minister of national security ratcheting up the event’s rhetoric. He has painted a picture of insurrection and sedition but has failed (so far) to provide evidence.

My fellow Bahamians and residents, we are past the Rubicon.

Which officers were injured?

How were they injured?

Why, if this really happened, were the DNA not arrested on the spot?

In the backdrop, we know that the DNA stood with prison officers who staged a protest against the same minister a day before being called to answer questions on an event that happened three weeks prior.

The prison officers got their cars towed during the protest; the DNA got locked up a few days later.

Social media, that great bastion of Bahamian free speech, has concluded that ‘tight pants’ Marvin Dames is behind the deception.

I’m still on the fence.

What I do know is that (in the words of Ricky Ricardo) someone has got ‘‘some esplaining’’ to do.

Why was our government’s political opponent detained over something our prime minister (through past actions) condones, and why has this become a grim chapter in our (banana republic) reality? If Minister Dames is unable to prove his claims, the very least he can do is apologise. It’s one thing to be wrong, and another thing altogether to be strong and wrong.

Usually, I reserve special shoutouts for my radio show. I have to say, though, that I was particularly impressed by the speed at which Progressive Liberal Party MP Glenys Hanna-Martin and former Free National Movement opposition leader Loretta Butler-Turner were on the scene to show support for Mrs Komolafe.

Hopefully, as we continue to battle this pandemic, more of the same occurs.

As we try to grow as a country, let’s remember the words of philosopher Albert Camus: “Democracy is not the law of the majority, but the protection of the minority”.

If they can arrest the DNA leaders, then put those politicians on trial for all their criminal activities too. How many years they have committed crimes and gotten away with it and still running for a title. The law don't exist for some I guess...