A Comic's View: Farewell To Big Ed, A Baseball Legend 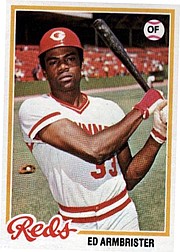 I was deeply saddened on Wednesday evening to hear of the passing of Bahamian baseball legend Ed Armbrister, after a long battle with diabetes.

I will get into Armbrister’s baseball career in a moment.

Over my illustrious career (nothing wrong with occasional self praise) at the Jokers Wild comedy club, I have made it a point to incorporate sports into my act, especially when working the crowd.

Whenever I encountered guests from Boston, I would always poke fun at the Red Sox.

Being a die hard Yankee fan it came natural and any guests from New York in attendance would automatically have my back.

The jokes worked so well I started tagging them with - “I’m sorry for busting your chops, it’s just comedy. If it’s any consolation capture a bit of World Series history by taking a picture with Ed Armbrister from the ‘75 Reds, he’s a pit boss in the casino. If you’re nice he might let you see his World Series ring.”

In true tourist fashion, they started to take me up on my offer and before anyone knew, scores of guests from Boston who had been to my show, would head to the casino in search of a photo op with Ed Armbrister from the Big Red Machine (Cincinnati Reds).

When he found out the source of his newfound popularity, he popped in to the club one night to encourage me to continue on my path with comedy and entertaining the guests. And, of course, to share a laugh about the numerous photos he’d been posing for in the casino with guests from Boston.

From that moment right up until the time he retired, he would often call me to let me know he was sending some “special guests” from Boston to see the show, I always made sure Ed’s guests were a big part of the show and well taken care of.

Now what annoyed me about his passing was the erroneous tribute paid to him in the Senate by PLP Senator and party chairman Mr Fred Mitchell.

I have long stated Mr Mitchell is in love with the “politics” of politics and making every political opportunity all about him.

Mitchell’s recent comments in the Senate, regarding Armbrister’s career and his achievements were way off base.

It bordered on “fake news”.

Armbrister was originally signed by the Houston Astros organisation in 1967 and came to the Reds in a blockbuster trade with the Astros on Nov 29, 1971, that also included the late Hall of Fame second baseman Joe Morgan, pitcher Jack Billingham, outfielder Cesar Geronimo and third baseman Denis Menke.

Armbrister did participate in ten postseason games and earned a World Series ring in both 1975 and 1976.

Armbrister’s most famous moment though, came in Game Three of the 1975 World Series when in the bottom of the 10th inning with the score tied 5-5 he successfully laid down a sacrifice bunt, and then as he tried to run to first base crossed in front of Boston Red Sox catcher Carlton Fisk, which caused Fisk to make a late and erratic throw to second base to try to force Geronimo.

The ball sailed into centre field, as a result.

Fisk and Reds Sox manager Darrell Johnson both argued that Armbrister interfered with Fisk, but the play stood.

After an intentional walk to Pete Rose loaded the bases and a strikeout of Merv Rettenmund, Morgan singled home the winning run.

WHAT GAME WERE YOU WATCHING?

Mr Mitchell, what game were you watching?

There was no play at the plate with Armbrister sliding home attempting to score and colliding with Red Sox catcher Carlton Fisk as you stated in the Senate!

A complete falsehood passed off in the Senate with such conviction as if it were gospel.

I wonder how many other half truths Mitchell has slipped through in his previous Senate contributions?

A simple Google search would have jogged your questionable memory, Mr Mitchell.

What I find most ironic is that considering Mr Mitchell’s fondness for protocol, rules and regulations, one would think he would have at least gotten Mr Armbrister’s career achievements correct.

It’s only fair, I’m quite sure when it’s time for Mitchell to be memorialised he wouldn’t want his burning of the constitution, his suggested invasion of Haiti and the victriol he’s spewed about former Prime Ministers Pindling, Ingraham and various political foes over the years to be omitted or altered. I’m quite sure he’d want his entire body of work and subsequent achievements to be recognised in the highest form possible.

Despite all the accolades and World Series rings, Ed Armbrister’s true passion was with the inner-city kids and the Community Baseball Leagues. That’s where he made his greatest contribution to the development of baseball in The Bahamas. He always wanted to assist. That was his greatest legacy.

He will be missed.

While I enjoyed reading your article and you obviously know your baseball, you admonished Mr Mitchell for propagating 'fake news' and so now I want to set the 'record straight' with regards to an erroneous statement of yours. Ed Armbrister was a colleague of mine in the PI casino back in the 80's. He was a croupier and never a pit boss.