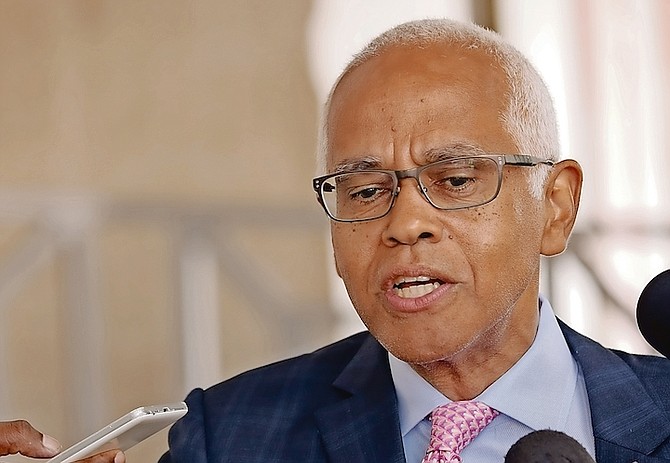 TOURISM Minister Dionisio D’Aguilar has defended the government’s use of the travel health visa saying it has “worked well” for the country.

Speaking to reporters yesterday outside of the Churchill Building, the minister said the visa was an important tool in keeping the country’s COVID-19 numbers low.

In recent days, the Progressive Liberal Party has fiercely criticised the travel visa. Should it become the next government, the PLP has said the health visa protocol would be removed immediately.

In the meantime, the PLP has called for visa accounting to be made public, adding the country should only require negative COVID-19 tests for travel.

In response, Mr D’Aguilar said yesterday the country has done a good job in keeping virus numbers down.

He said: “The genesis of the health visa was to implement the protocols laid down by the Ministry of Health and it’s incredible to me that the opposition would think that somehow an airline could do this better than we have done.

“So, remember with the health visa, we check for four things: is it the right test with the right result, within the right time period, vetted by an accredited lab.

“Now if you expect someone at the check-in counter to be able to do that then you’re crazy.

“It has worked very well for us. As you can see the numbers are bouncing back. The numbers are very robust. Atlantis was at 90 percent, Baha Mar was at 75/80 percent and we’ve been keeping the COVID numbers low. So, this has contributed to the successful rebound of tourism.

“It has helped us to keep our COVID numbers low while bringing large amounts of visitors into the country.”

He added: “I think it was the right decision to implement that visa.”

Asked how much longer the country would continue to use the health visa, the minister said this was dependent on the advice of health officials as they were the ones requiring either a PCR test or vaccination for visitors.

The visa, he said, was the “only” way to validate the COVID-19 status of visitors.

He suggested that use of the visa has set The Bahamas apart from other countries who still require a two-week quarantine or prohibit areas from visitors.

He has no evidence that the travel VISA has had any effect on COVID 19 cases It also has nothing to do with an increase in Tourism. The Vaccine has helped.

he could easily have placed persons at the airport to check these documents it would have cost less. than 7;4 million dollars

Health visa has worked for our rich elites to get richer while we get poorer paying for their richness. And they rake in the profits. Not NIB nor our treasury piggy bank. Leaders gat plans of their own. Permanent Secretaries carry out political directives based on leaders will who come and go every five years. Time to see what everyday DNA poor will do for struggling Bahamians. These rich filth take us for stupid.

The bureaucratic Health Visa has been a great detriment to the tourist business. Thousands of visitors could not come because of the rules imposed by The Tourism Minister. They simply cold nor comply with all the regulations and be in Nassau by the fifth day after the test. The test result and forms required to be completed .and scanned to get the Visa are too time consuming and expensive. Tourists mostly went elsewhere where it was easier to enter. The easiest way would be for people to show the Covid19.test result at the airport and then be given a boarding pass. There have been so many complaints from visitors, including usual winter residents, and travel agents. However the Minister stubbornly refused any compromise.. There are too many hassles involved in coming to our country.. When will common sense prevail?

This man believes it is he who stretched out his hands and calmed the sea. Not so

The Truth is the travel Visa discouraged travel.

Making profits from sickness. Covid has become monetized and seized upon for selfish reasons and as a means to keep Bahamian population in a tight control. Profiteering is an old normal not a new normal. It only changed its clothes so said to save lives but actually it drives substantial prints for the medical pirates by riding a hijacked global tourist product that is fighting for freedom. Tour travel is sweet personal not national money to this select crew. We need Woods Rodgers to come back from the grave for these pirates and shysters.

Smt no need to even have any outside party check, if doctors hospital and p.m.h. were the only one's to be mandated to issue test, all you need is 4 persons from each hospital with their laptops to verify. It really isn't that complicated, costing the gov.0 dollars. If the hospitals wanted to place a verification fee of 5 on every test they would have also funded the airport checks.

Even though all global Psychiatric Health entities rate gambling a behavioral addiction at DSM-5 the same as cocaine and substance addiction all attempts to attract this minister to the monster of addiction has failed. No wonder Central Bank said gaming houses earned 2billion dollars. Thousands of Bahamians have lost family values, fanancial viability, and their souls to the death grip of gambling. A far more devastating shock to the wellbeing of this nation than Covid health money. It is criminal that no outside vehicles were created like in every other country funded by gaming houses to deal with helping their addicts, instead gaming venues are allowed to be be the kettle and the fire and serves as no refuge for the ill. Some helping caring minister.