A Comic's View: Let’S Get Ready To Rumble 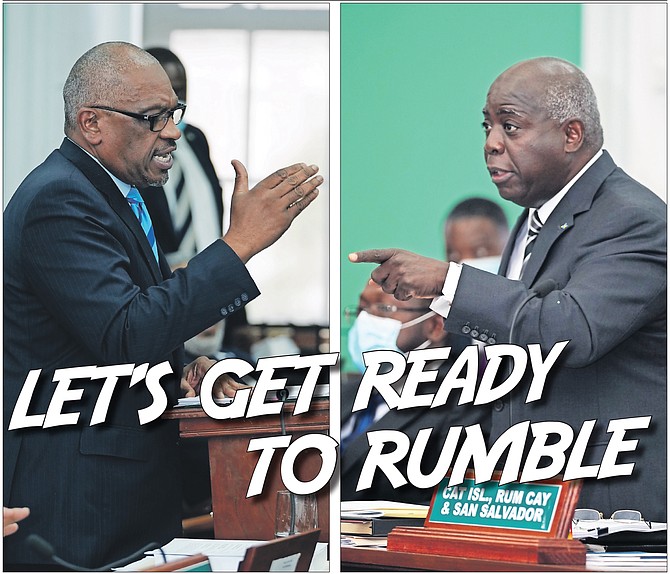 IF you missed Wednesday’s session in the House of Assembly, have no fear because I suffered through (most) of the debate to bring you the highlights and lowlights.

What started as a debate on the latest Emergency Powers extension quickly turned into matchups even Vince McMahon (of World Wrestling Entertainment fame) couldn’t have scripted.

No one was put through tables or hit with chairs, but a few were kicked off proverbial ladders, and some imaginary briefcases got snatched.

Earlier this week, as reported in this newspaper, “The International Monetary Fund (IMF)...confirmed the Bahamian economy shrank by over $2bn last year to almost match the size of the country’s rapidly-growing national debt.”

Was this bad news? Was this regular news? I guess it depends on who you ask. The verbal jousting between the combatants came as Cooper sought to sound the alarm while Henfield sought to point out that every country was experiencing the same financial woes. Their back-and-forth didn’t produce a clear winner on the issue of whether we should whistle optimistically into our economic future or hunker down for dark days ahead because none of their blows landed.

So let’s call it a draw.

If there were a “winner”, it would be Henfield, who catapulted to the top of the list of potential deputies should current DPM Desmond Bannister decide not to contest the position. Cooper is already his party’s second-in-command and seems to have that position “on lock”.

Early on during Prime Minister Hubert “Doc” Minnis’ presentation, Opposition Leader Philip “Brave” Davis was on his feet with a point of order.

And, as the young people say, plenty “slapping up” soon followed.

Brave denied the PM’s accusation that early on during the pandemic the PLP leader advocated for bars to open. Doc reminded him that he did.

Brave then landed a “Stone Cold Stunner” by calling out the PM, and the alleged favoritism shown to his alleged “special interest donors”. In a flurry, all I heard Brave say was, “Something, Something...Island House!” He followed with a quick, “Outside Lyford Cay, bar...ISLAND HOUSE!”

Despite looking like someone shocked at hearing “He Whose Name Must Not Be Spoken”, Doc quickly rallied to his feet. He accused the Opposition Leader of wanting the bars opened so people would “drink, dance and dine” during a global pandemic.

Then, like The Rock with his trademark over- the-top finishing move (aka the Rock Bottom), Doc fired his own “unspeakable” accusation, saying Brave wanted “Bahamians to die!”

Did the PM show favoritism to “special interests”?

Was Brave’s push for opening bars tied to a political calculation that open bars would mean more Covid cases, which would be bad optics for the PM?

Again, I guess it depends on who you ask.

I give a very slight edge to the PM in this bust-up only because he quickly recognised that there is no holding back when the gloves are off. Brave couldn’t (or wouldn’t) counter that severe accusation. The reality is, in politics (as in life), when you pull your punches, sometimes you get knocked out.

Lanisha Rolle, who seemingly spent most of her time launching a rambling, barely-veiled attack on her rumored future opponent Leslia Brice. Leslia is the likely PLP standard bearer for the Seabreeze constituency.

Travis Robinson, who has adopted a strange speaking cadence, essentially becoming a caricature of himself. He quoted R Kelly, of all people. (Take a timeout, Travis. You’re better than that).

Miriam Emmanuel, who (thank the Lord) didn’t try to count any numbers larger than 100 but instead treated her contribution like an American Idol audition. She sang. Yes, sang! “Imaaaaaginnneee!”

By now, most Bahamians recognise that whenever Speaker of the House Halston Moultrie and Englerston MP Glenys Hanna Martin are in the same room, there is a high probability of a showdown. But the Speaker’s assertion of the existence of an imaginary “algorithm” that proves she is the most disruptive member of the House was really... weird.

Was he cranky from a long day of playing referee?

Who knows, but this fight came out of nowhere. Hopefully, after all the chaos we saw yesterday, the Speaker heeds the great Dwayne “The Rock” Johnson’s advice to always “know your role” and, well, you know the rest.

Until next week, here’s hoping our leaders remember the goal is to fight against the pandemic and not each other.

Nothing but a bunch of the country's most incompetent and corrupt buffoons. This is precisely what power juiced Minnis and his Communist Chinese friends want......the complete dessimation of our nation's parliamentary democracy.