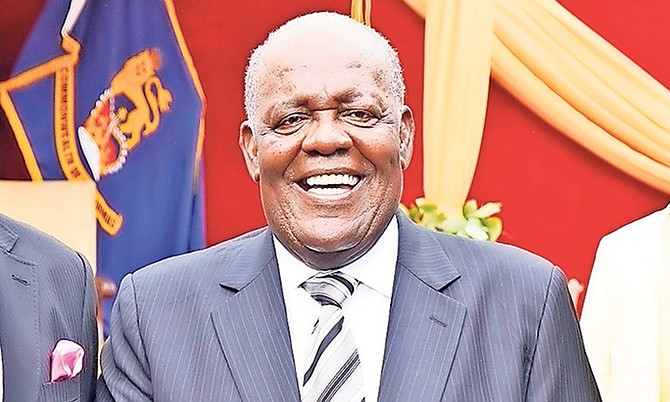 Mr Ingraham was admitted to Doctors Hospital on Tuesday with COVID-19.

“Hopefully he stays on the same trajectory and has a complete recovery,” Dr Sands, who is one of his doctors, said.

“We hope that his hospitalisation is short-lived and he is released in a Bahamian couple of days.”

Mr Ingraham, 73, initially experienced shortness of breath and malaise and was diagnosed more than a week ago. The medical team taking care of him includes an endocrinologist, a kidney specialist, a pulmonary specialist and an infectious disease specialist.

The former North Abaco MP is among the most prominent people in the country to catch COVID-19.

Others include opposition leader Philip “Brave” Davis and Deputy Prime Minister Desmond Bannister, who have since recovered from the virus.

“We were deeply saddened to see the banner headlines in the paper today and we do wish him every success, a quick, speedy and full recovery and that his family similarly would soon have the benefit of having him come back the right way where he can continue his service to the Bahamian people because even though former prime ministers you may think they are not doing anything, one thing they always try to do is advise current prime ministers. They play a very valuable role,” Mr Bethel said.

“COVID-19 has taken its toll on many of our fellow Bahamians, disrupting the health of our nation,” a statement from PLP Chairman Fred Mitchell said.

“This virus is no respecter of persons and transcends our political divides. We have no doubt that PM Ingraham will defeat this virus with the same courage and tenacity he has exemplified over his career in public life.

“On behalf of our leader, Philip Davis and Mrs Davis, deputy leader, Chester Cooper and Mrs Cooper, our parliamentary caucus, officers and members, we wish Mr Ingraham and the many Bahamians battling this virus God’s speed.”

The statement said Mr Davis has been in touch with Mr Ingraham through text message.

As a target done marked for political extinction, it's not so strange that Carl Wilshire is the one only redshirts voice. wishin' Papa Hubert a speedy recovery. The rest of Mr. Minni's, yes man's, are much too afraid of offending the touchy feelings of their great leader. Yes?