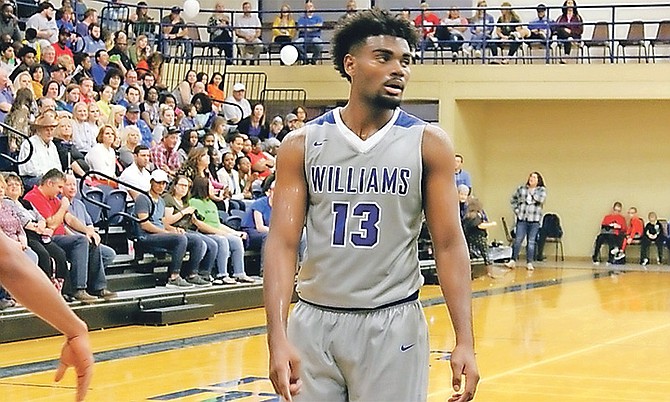 SHACKEEL Butters has been named an American Midwest Conference (AMC) Player of the Week for the second time this season. Photo: WBC Athletics

SHACKEEL Butters received another conference-wide accolade in the NAIA as he prepares to lead his William Baptist Eagles into the postseason.

Butters was named an American Midwest Conference (AMC) Player of the Week for the second time this season for his double double in a crucial seeding win for the Eagles, 69-65 over the Health Sciences and Pharmacy Eutectics.

The senior forward finished with 19 points and 19 rebounds on 8-14 shooting from the field.

The Eagles finished the regular season at 8-10, 6-6 in the AMC. They enter the conference tournament as the No.5 seed and will travel to face No.4 Columbia College at 7pm local time. They opened AMC play with a 76-67 win over William Woods Owls and Butters came through with 16 points and nine rebounds. He followed with a double double - 20 points and 10 rebounds - in a 78-64 win over the Hannibal-LaGrange Trojans.

In his sophomore year, Butters received honourable mention All- American and made the second team All-AMC. He led the NAIA with 358 total rebounds, which was a Williams school record.

He was named AMC Player of the Week twice and finished with 15 double-doubles (points-rebounds). While he started and played in all 30 games the Eagles played, Butters averaged 11.9 rebounds and 11.7 points per game as he shot 60 percent from the field.