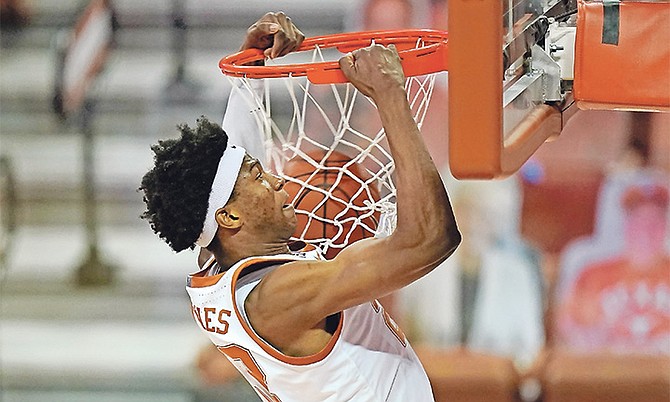 THE Texas Longhorns outscored the Kansas Jayhawks by 12 at the free throw line and scored the last five points of the game from the charity stripe, including one from Kai Jones that sealed his team’s largest comeback win of the season.

Jones split a pair at the line with five seconds left to play in the No.14 Longhorns’ 75-72 overtime win over the No.17 Jayhawks at the Frank Erwin Center in Austin, Texas, on Tuesday night.

Jones finished with 10 points and eight rebounds in 21 minutes off the bench. He shot 4-5 from the field and also added one assist, one steal and a team high +10 plus-minus total.

“I have to say, Kai Jones, this was one of his best games from an activity and energy standpoint. He really went and grabbed the ball, to get five offensive rebounds was huge,” Texas head coach Shaka Smart said in the post game press conference. “He was big because when they went small, it was helpful to put him in there at the five to kind of counteract what they were doing.”

Jones had just five rebounds in his previous three games. Smart said Jones was able to improve on both his rebounding and offensive efficiency against Kansas.

“I thought he was terrific tonight with his motor and energy. Kai is a guy, if you spend time around him he’s got an unbelievable spirit and passion to him so what we’re trying to do is really to encourage him to bring that out as much as possible on the court. We did really challenge him with rebounding because he hadn’t rebounded as well the last couple of games and I thought he responded in a terrific way,” Smart said.

“The other thing is that he dunked the ball. That’s what we need you to do, you’re 6’ 11,” you get the ball around the basket you got to go finish and dunk it. That was big for us because we have had some missed finishes that end up being zero points on the offensive end so I thought he was efficient there.”

The sophomore forward reached double figures in scoring for the eighth time this season and the 10th time in his career.

Texas once trailed by 14 near the four-minute mark in the first half before they eventually rallied to improve to 6-3 in games decided by three points or less this season. It was also their fourth win against a team ranked in the Associated Press Top 25 rankings. Texas will play another Top 25 team this weekend when they travel to face the No.18 Texas Tech Red Raiders on February 27. The game will be televised by CBS at noon local time.

Like many programmes in the NCAA, Texas has been hampered by postponements, limited roster availability due to COVID-19 protocols and prior to the matchup against Kansas, had lost four of their last six.

“These guys have been through so much,” Smart said. “I think when you go through a lot of adversity and challenges, that can really bring you closer together and make you stronger as a group or it can kind of push you apart and put you in a position where you’re making a lot of excuses and kind of pointing fingers. I’m really proud of the way that our guys came together tonight after Kansas had a phenomenal start and we were sluggish.”

On the season, the 6’11” 220-pound forward is averaging 8.2 points and 4.8 rebounds per game while shooting 58 percent from the field and 42 percent from three. His 2021 NBA Draft stock continues to rise and several publications project the versatile forward as a mid first to second round pick. His projected Class of 2021 rankings include ESPN - No.16, Sports Illustrated - No.22, Yahoo! Sports - No.23, and NBAdraft.net - No.24.