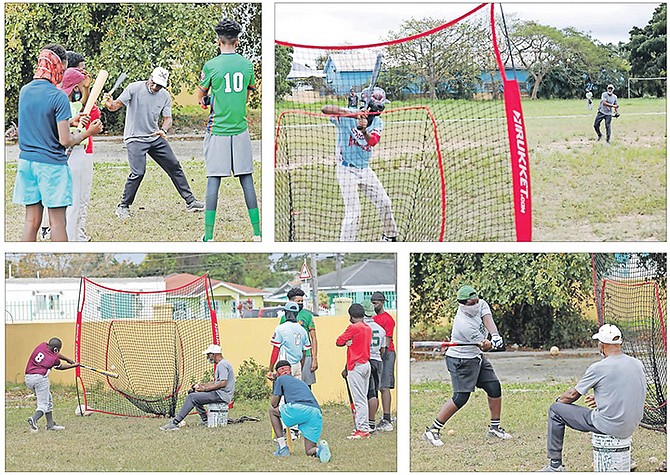 MARIO Ford has moved his youth baseball camp to the Columbus Primary School field and, although the players are slowly making their way there, he’s pleased with what he’s seen so far.

THIS is the second week that Mario Ford has moved his youth baseball camp to the Columbus Primary School field and, although the players are slowly making their way there, he’s pleased with what he’s seen so far.

“The kids need to get out and play baseball,” said Ford of the camp that is now in its 35th year of existence, primarily at the old site at Windsor Field, which is presently under renovations.

“We need the fresh air because we don’t know how long this pandemic will be. Once the kids come out, they can socially distance themselves.

“We have the hand sanitiser, and they just need to bring their masks to keep on at all times.”

Ford said it’s quite obvious the parents might be concerned about their young children between the ages of 5-15, but he assured them that they’re in a safe environment to learn the game of baseball.

“We will continue to go through the basic fundamentals of fielding, throwing, the proper ways to hit and running the bases,” he insisted.

“We also allow them to play some inner-squad games as we move forward.”

The camp is expected to continue every Saturday from 10am to noon until the end of March.

After taking a break for the Easter holiday, Ford said he intends to return and will continue until the end of May or early June before breaking for the summer.

Two of the participants at Saturday’s camp said they are enjoying themselves.

Mason McKinney, who has been coming to the camp for the past two years, said he came out to the camp to get better at “batting and catching.”

The Queen’s College third grader said he has learned how to step and throw the ball. “I think he’s a good man and he’s a good coach,” the nine-year-old McKinney said. “I’m happy to be back here at the camp.”

And Kaden Thompson, a 16-year-old student at Ebenezer Virtual Online School, has been attending the camp for the past year. “I want to bring my skill level up to see if I can go further than where I am right now,” the lanky first baseman said. “The more I learn the further I can go in the sport and hopefully I can get drafted.”

Thompson said he has played with or against and even watched some of the professional players get signed to their various contracts playing out of JBLN and Freedom Farm and he’s hoping that he can be one of the future players to follow suit. “Anything that I can pick up from coach Mario Ford will be a help,” he said. “So that is one of the reasons why I decided to come back and participate in the camp.” Ford, a former national baseball, softball and cricket player, was expecting to have at least one of the pro players to visit the camp on Saturday.That didn’t materialise, but Ford said he anticipates that they will show up to help inspire and motivate the young players, some of whom have the potential to becomes pros in the future.