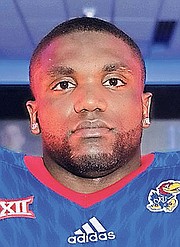 MAVIN Saunders has had an immediate impact on the field for Las Rozas Black Demons of the LNFA Serie A, the second-tier division of American football based in Las Rozas, Spain.

Saunders caught a 27-yard touchdown in the Black Demons’ 35-28 win over the Osas Rivas Sunday in Rivas, Spain.

His spectacular catch between two defenders gave his team a 14-7 lead in a back and forth contest that had two ties and three lead changes. A late defensive touchdown on a fumble recovery from Jorge Velasco was returned 75 yards for a touchdown and the final go ahead score.

It was the second consecutive win for the Black Demons since Saunders joined the roster as one of several key transfers this season.

After an approximately two-month hiatus, Las Rozas returned to the field with an historic win over the four-time LNFA Serie A defending champions, Badalona Dracs, 29-7.

It was the Dracs first loss in four years, which included 47 consecutive wins in Spanish competition. Saunders was the top target offensively in his debut with four catches for 56 yards.

“Undoubtedly, a player who will help the passing attack and will raise the level of training for the next matches,” the team said in a press release at the time of Saunders’ signing.

Saunders’ preparation for the 2019 NFL Draft took him across the United States to bowl games and showcases as he looked to increase his stock at the professional level.

Saunders spent his first four seasons at Florida State before graduating and transferring to the Kansas Jayhawks to conclude his collegiate career.

Over the course of his career he finished with 20 receptions for 266 yards and one touchdown.