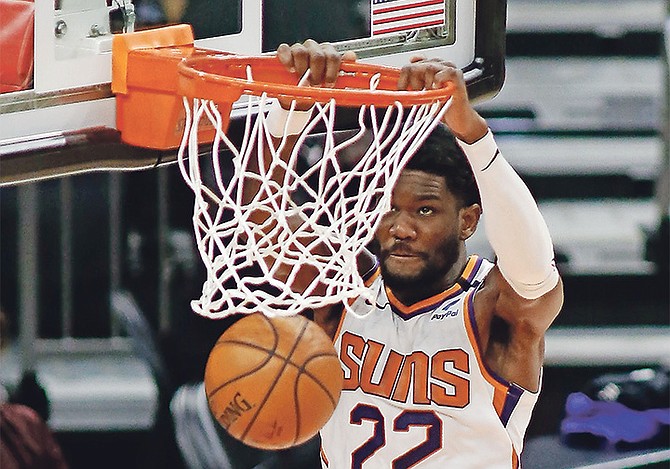 Phoenix Suns’ Deandre Ayton slams one home against the Portland Trail Blazers during the first half last night in Phoenix. (AP Photo/Darryl Webb)

Phoenix has won nine of its past 10 games and put this one away late in the third quarter.

Booker made a 3-pointer with two seconds remaining and then — following a quick Portland turnover — Cam Johnson hit another 3 at the buzzer to give the Suns a 100-71 lead.

The 32-point win was the Suns’ largest margin of victory this season.

Portland has lost two straight following a six-game winning streak. The Suns improved to 20-10 on the season while the Trail Blazers fell to 18-12.

Booker poured in points all night, scoring 17 as the Suns pushed ahead 32-26 in the first quarter.

The sixth-year guard was up to 22 points by halftime, including an off-balance 17-footer at the buzzer that gave Phoenix a 63-54 advantage. He finished 12 of 17 from the field and hit both his 3-point attempts. He was also 8 for 8 at the free throw line.

Damian Lillard led the Trail Blazers with 16 points in the first half and finished with 24. Nassir Little added 18 off the bench.

COOLING OFF, A LITTLE

It was the fourth time in NBA history that a team made at least 22 3s in back-to-back games. The Suns were very good again on Monday from long range, but not quite as prolific. They shot 16 of 33 on 3-pointers (48.5%).

Trail Blazers: Portland got good minutes from its bench in the first half. Rodney Hood had nine points and Carmelo Anthony added eight. ... Anthony got a technical foul in the third quarter for elbowing Suns forward Jae Crowder in the face.