Insight: Tough Decisions Lie Ahead And That May Mean Mandated Vaccines 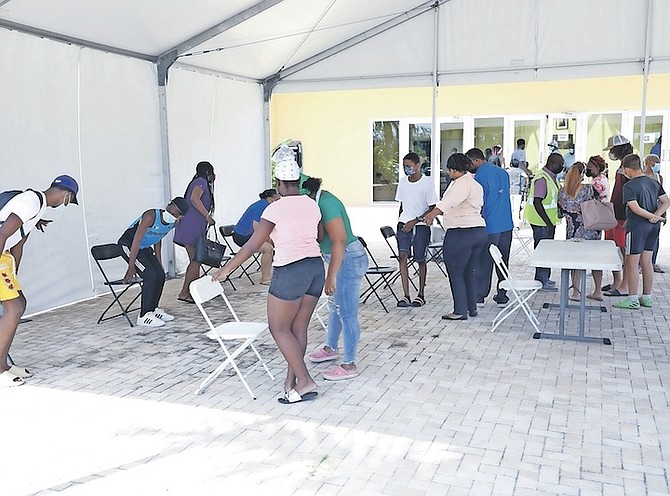 POLITICAL factions and Bahamians alike, enjoy the lead up to election day. The chest rattling vibrations of booming stereo systems accompanied by pom-pom shaking party supporters is an energy unlike any other in The Bahamas. Undeniably, election season is nearly as culturally affixed to who we are as Bahamians as Junkanoo. But soon, the music will fade and we will have to snap back to reality and the task that lies ahead.

August is shaping up to be worst month of our war with COVID-19 since the very first infection was announced by Prime Minister Dr Hubert Minns in March 2020. With 11 new deaths reported between August 20 and August 23, our death toll stood at 354.

Do not be fooled, the next Government of The Bahamas knows it will have to make some unpopular decisions. For whatever reason, none of the major political parties have engaged in their own public education campaigns on COVID-19 vaccines - perhaps chalking it up to a lost cause – and so it is likely other measures will be taking place.

Two things that took place last week, in particular, lead us to this belief.

The Twitterverse went into somewhat of a craze as the term “COVID-22” was trending throughout the week. It all began when Swiss Professor of Synthetic Immunology, Sai Reddy, in an interview with a German newspaper discussing COVID-19 variants, termed the Delta variant “COVID-21” and said the following in reference to what he viewed as the inevitability of a future variant barring rapid and widespread vaccine acceptance.

“It is the next phase of the pandemic when Beta or Gamma become more infectious or Delta develops escape mutations. That will be the big problem for the coming year. COVID-22 could get worse than what we are witnessing now,” he said.

Of course, there is scientifically no such thing as COVID-22, as this was quickly debunked by some of his contemporaries and later clarified by Reddy. Seeking to set the record straight, he spoke to popular US media outlet, Newsweek.

“I of course agree that the proper and correct usage of the term for the disease caused by SARS-CoV-2 is COVID-19. I unfortunately did not realise that my use of the term ‘COVID-21’ or ‘COVID-22’ would lead to such a reaction.

“What I meant to convey was that as SARS-CoV-2 evolves literally, our thinking about how to respond and deal with the pandemic should also evolve.”

He added: “Now as we start to think about 2022, we again need to consider how to respond to COVID- 19. My thoughts mentioned above make it clear that increasing vaccination and access to vaccination is the most important priority.”

But before you breathe a sigh of relief that as yet there is not a more transmissible, deadlier variant as yet, trend analysis shows it is only a matter of time. This may have been a part of the strategy which led to the Prime Minister calling an early election.

Dr Minnis has to know something major has to happen and soon.

The US Centers for Disease Control and Prevention has again issued a Level 4 Travel Advisory due to our COVID numbers, and with a bottom ranking 13 percent vaccination rate in the region, we’re all but pleading for tougher measures to be enforced by the government. However, we can be certain that they are on the way.

The recent approval by the US Food and Drug Administration (FDA) of the Pfizer vaccine could mean that mandates are in the pipeline. Wait-and-watch can no longer be an option. No longer will citizens be able to push back against the thought of a mandate, as we are currently forced to take other FDA approved mandated vaccinations to send our children to school.

While approvals for children have not been announced as yet, parents will likely soon be unable to refuse the shot – at least if they want to keep their jobs, not just take a COVID-19 test.

After the US donated 128,700 doses of Pfizer, which will be followed by an additional 57,600 through the COVAX facility before the end of this year, vaccinations can be mandated for up to 93,000 people – more if some citizens have already taken their first jab of Pfizer. Scientists, medical professionals and politicians are all looking for more approvals to come with Moderna and Johnson & Johnson predicted not to be too far behind.

Mandating vaccines would have been a political nightmare with an election looming. But with COVID out of control and vaccine hesitancy mixing into a deadly cocktail, whichever party wins the next election can safely mandate vaccinations - at the very least for civil servants. After all, it is obviously not as unsafe as many people thought and the people that trafficked in misinformation would have led you to believe.

Tall tasks lie ahead for the next government. Our economy, while tourism has shown some life, has suffered significant body blows. And even tourism remains in a very fragile state if our vaccination numbers remain so low. As President Biden is already showing his willingness to make tough and unpopular decisions, our next government ought to be getting prepared to make some of its own.

If we’re being honest, as the death toll continues to rise and families would like to see some form of justice for what must feel like a killing of their loved one, mandating vaccinations may very well be the right decision.

The autonomy being offered to the Bahamian people in relation to the COVID-19 vaccines has become far too dangerous for everyone in society. Moreover, as talks surrounding the possibility of a new and potentially more dangerous variant threatens to arise later in the year, it may be helpful to provide those procrastinating over taking the vaccine some helpful encouragement.

Too many lives have been lost and too much time has been wasted.

People will not stand for that. Remember the lockdown that took place with immediate effect? It could not last for a day.

Funny you speak if the few. It is only a few that propose mandatory vaccines.

Plus, this iteration of vaccines could not save tourism.

One what grounds? It’s clear the effect of vaccination is short lived. And the risk from covid to all those other than vulnerable is marginal - 2%-4% of hospitalization, 0.15 of death.... A few people are allergic to nuts - around 1.1% of the population- you would mandate the removal of all nut based menu items? Or strategically advise people of the instances or menu items that put them at risk…?

And what if it's not what the majority want?

Relying on vaccines for OUR country for our salvation is a strategy doomed to fail. We are a nation of hypertensive diabetic overweight people. Other countries ahead of us are already shoeung the "vulnerable" getting reinfected even after a 3rd booster

There are no "tough" decisions in this COVID fight. We simply do whatever the US does and then live and die by their results.

It is more likely that vaccinated people be banned from The Bahamas than Minnis or any government attempting for force vaccines on the Bahamian people. Vaccinated persons currently pose more threat to unvaccinated people. And the science does not support vaccinating everyone. The Recent research from Israel says the approach to mass vaccinations was wrong. Only high risk persons should have been vaccinated. And definitely persons who had the virus and recovered should not be vaccinated. Their immunity is now better than what the vaccines can supply and is more effective against new strains and variants. And the manufacturers of the AstraGenica in their Oxford research say the vaccines in their current form are becoming obsolete. Herd immunity, they say, cannot be achieved through vaccinations. The vaccines lose their effectiveness and further claim that persons who don’t get third doses are less protected than unvaccinated persons. Israel does not want to continue with third doses. That country is seeing more people who had third doses come down with full blown Covid. Breakthrough cases. So what will be the grounds for any government submitting its people to mandatory vaccines? Further experiments? To get information that other countries who had mass vaccinations ahead of this country are getting? Information that in the least is not good? Mandatory vaccinations when the data clearly shows that least vaccinated countries are better able to prevent new cases and deaths than highly vaccinated countries? And now they are hinting at reinfections or ‘lingering viruses’ in vaccinated people. Mandatory vaccines on whose authority?

You have gone so far off the deep end. Find a way to get back in touch with reality.

Explain your remark and help guide me back to (your) reality. What you find in my post that is too deep for you?

I bet he couldn’t.

Did you just reply to yourself?

How it that the US, who is among the most vaccinated countries and the most active distributor of vaccines, still having 200,000 new cases ? And still higher numbers of deaths than any other country on average. Twenty seven percent of ALL the new cases worldwide. Yet they have a ‘do not travel’ advisory for this country, but our borders remain wide open to them.

Remember at one point they attempted to inject Bahamians with live strains of the AIDS virus claiming it was test vaccines. And if they haven’t found an AIDS vaccine in over four decades and a vaccine for the Spanish flu in over 100 year you want to trust a vaccine that over a dozen companies claim to have separately developed in the matter of months. Go stick your vaccines!

They are back to wearing masks and restructing student activities.

This is,an elitist country and the vaccine us an excuse to opress the poor and untouchables.

This iteration of the vaccine has failed and efficacy is waning.

FIGURE THIS ONE OUT: Data from Israel indicates there are greater numbers of breakthrough cases amongst persons who took a third dose than people who only took two doses of the vaccines. Israel was the country that probably administered more third doses than any other country. They are now not recommending third doses, except only to patients that are high risk. BUT their recent research also concluded that once the vaccines wear off, persons who took them are less protected than unvaccinated people. Now people who have the Green Pass that are about to expire are left up in arms . The Green Pass cannot be renewed unless they receive a third shot of the vaccine. This ‘pass’ allows persons to travel, go to the gym, dine indoors and do activities that unvaccinated persons are not allowed to do.

when the understand that the vaccine is the cost of the wave then they will stop pushing it. Just as they say the vaccinated are not following guidelines neither are the so called golden vaccinated. They are goin around free feeling they are out of problems when they are the once spreading it to those whom are not. The vaccine has many side effects which are not being properly stated.