A Comic's View: Grab Your Popcorn, The Race Has Started 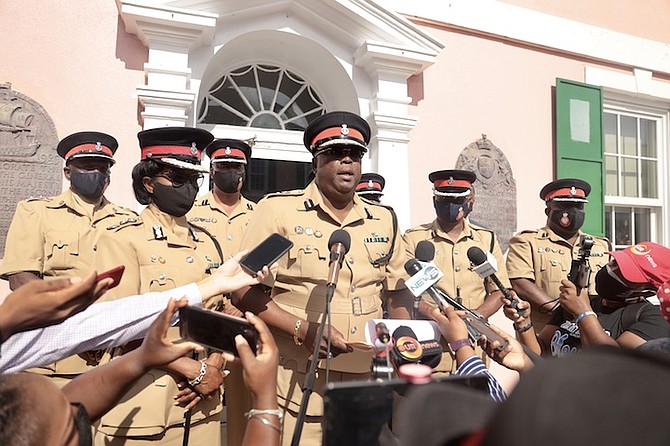 THIS week, the outgoing Speaker of the House presided over his first and last “open parliament,” and the proverbial election bell got rung. Let’s get started.

BRINGING DOWN THE HOUSE

I knew this week would be one for the history books.

When Speaker Halson Moultrie hyped up an event in the square that promised to give voters a chance to express their “concerns” about the current state of the nation, I grabbed my pen and popcorn.

Surely this was just a sneaky way to have prospective voters lambaste his former FNM colleagues hours on end, right?

Unfortunately, before the so-called “open parliament” got started, the real parliament got closed.

Commissioner of Police Paul Rolle (dressed in the crispest, starchiest khakis I’ve ever seen), in his role as Provost Marshal, made his way to Parliament Square. Reading the words of the Governor-General, he announced that Sir Cornelius had prorogued parliament.

That’s right, mere moments before Moultrie and Co put on what may have certainly been a show for the ages, Doc Minnis shut down that potential super-spreader event.

And as the crowd later dwindled, so did Moultrie’s last chance to “throw a blow” at his one-time leader, Prime Minister Minnis.

Halson is running as an independent candidate in Nassau Village, but his chances do not look good. How will history judge his performance as an MP and as Speaker? There were great expectations when he first donned the robe. But many will argue, justifiably, he did not live up to them.

We may never know the details of exactly how, when, and why Moultrie stopped rocking with Doc, but we do know that Wednesday was likely his last time in the House in an official capacity.

Moral of the story? Even as Speaker, you can’t fight City Hall.

Halson Moultrie wasn’t the only person for whom Doc had a surprise in store. After weeks (if not months) of speculation, PM Minnis finally “ring da bell.’’

It was funny watching the past 48 hours play out on social media.

For the first time in our history, we have a permanent voters’ register. One outcome of this reality is that persons who failed to register before the parliament dissolved now find themselves on the outside looking in.

They will not have an opportunity to mark a ballot this go around. What that will mean for the upcoming general elections remains to be seen.

What I do know is that now is not the time to complain. The race to the finish line will be a sprint, not a marathon. And in case you missed it, the bell has been rung and they are off!

The Tribune should fact check whether or not an eligible Bahamian who has not registered to vote but shows up at their polling station with the required ID documents and proof of their constituency will have the right to vote on election day.

P.S. Keep in mind too that even if you've lost your voter's card that you used in the May 2017 general election, you can still vote this coming September 16 if you produce at your polling station on election day the required ID documents and proof of where you live.