A Comic's View: Choose Your Vaccine - But Choose To Be Safe

THIS week had its moments but the two stories that caught my eye were a multitude of options on vaccines for the nation and more PLP crying over spilt milk.

Let’s have a close look.

128,700 doses of the Pfizer vaccine arrived in the country through a donation by the government of the United States, Prime Minister Dr Hubert Minnis announced on Wednesday.

This is the initial tranche of 397,000 Pfizer vaccine doses the US government will donate to The Bahamas. 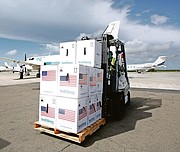 He reported 7,500 vaccine appointments scheduled this week in New Providence and Grand Bahama.

This all on the heels of Health Minister Renward Wells announcing on Monday that 40,000 doses of the Johnson & Johnson vaccine will arrive in the country by the end of August.

So Bahamas, we now have options for all of you, myself included who had certain issues with a specific vaccine, you can now take the one of your choice.

However, it’s not a COVID pass, continue to practice the social distance protocols because the vaccinated can still contract COVID as well as pass it on.

If you remain in vaccinated that is your choice which I respect, but I implore you all to be extra diligent with the social distancing protocols and continue to seek out the actual factual information regarding the pandemic and the virus so you can protect yourselves and families as best as possible from the ‘Hulkian’ variants that continue to change the make up of the virus making it even more lethal.

Choose wisely is all I’m saying.

HANNA ON THE HUNDRED

I think the late A.D. Hanna richly deserved being minted on our one hundred dollar bill, he meets all the criteria by far so to me it was a no brainer.

And then it got political.

Rightfully so the PLP through its chairman Fred Mitchell, painfully reminded us all – “I spoke to our leader the Hon Philip Davis last evening and to the former Prime Minister and Minister of Finance Perry Christie last evening. Both confirmed that the decision to put the image of Arthur Hanna on the 100 dollar note was one taken by our previous PLP Cabinet. This has now been confirmed in a public statement by the Central Bank.”

All of that is factual, Central Bank Governor John Rolle tweeted that the new $100 note was “five years in the making” and a “well deserved” tribute to Mr Hanna.

An additional statement from the Central Bank dated August 10 said since 2016, the institution had worked alongside the government to design a new $100 note with Mr Hanna’s image.

However, the statement from the Central Bank also clearly outlines the process: “The redesign and production of a bank note is a time intensive initiative. The process to source and license a portrait, design aesthetics, add security, choose optimal substrate and print and deliver the notes can take many years to accomplish.”

So if the previous administration failed to execute an initiative that they knew coming in was painstaking and time consuming, they can’t be upset that the FNM opportunistically took advantage of the PLP’s skunkin’.

It’s comparable to football, if a team fumbles the ball and their opponents capitalise off of their mistake they have no one to blame but themselves.

It seems so in this regard, for sure!

So don’t be bitter Mr Mitchell, be better, especially with execution of your good ideas, if your party truly wants to be the next government of The Bahamas.

JACK DANIELS is having a negative effect on you the FNM Government execute nothing. It was in progress from 2016 the FNM came to power in 2017. Did they stop the process.?

Now the PM acts as if he has done this great thing he was telling LIES again.

Maybe politicians are previously failed comedians? Would explain a lot.

Vaccine shedding is the term used to describe the release or discharge of any of the vaccine components in or outside of the body. Vaccine shedding can only occur when a vaccine contains a weakened version of the virus. None of the vaccines authorized for use in the Bahamas (Pfizer, J&J or AstraZeneca) contain a live virus. mRNA and viral vector vaccines are the two types of currently authorized COVID-19 vaccines available.

"It’s long been said the PLP is the party of ideas and the FNM is the party of execution." - Who said that? Some drunk walking down the street? Unless you are one of these 'head in the sand' party zombies who support your party regardless of what they do, it's safe to say that neither party has done our country any real good in many decades. Unchecked tiefing, no accountability, incompetence and plain old greed for power has been the common mantra for both FNM and PLP.