Stateside: Game Of Thrones Had Nothing On This Tangled Web Spun Through The Courts And Corridors Of D.C. 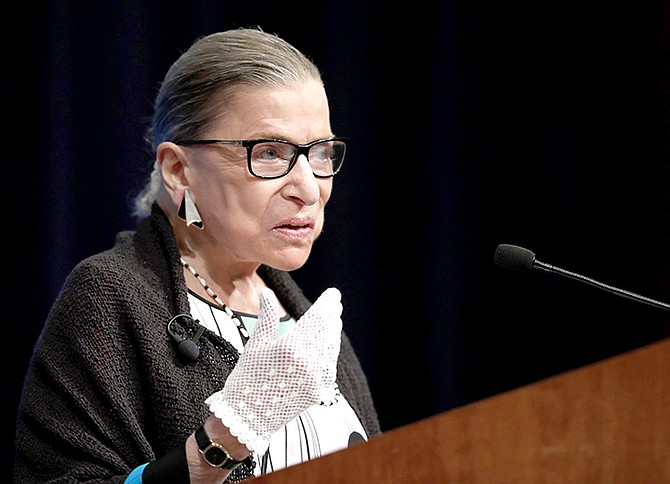 Gender and race politics are dominating the news in the US these days. What else is new?

Ruth Bader Ginsburg died over the weekend. Diminutive but fiery and determined, she was known most of all as a fierce fighter for women’s rights. In a lengthy appreciation of Ginsburg, former New York Times reporter and current Yale Law School professor Linda Greenhouse wrote about Ginsburg’s similarity to Thurgood Marshall. Marshall and Ginsburg devoted most of their long professional legal lives to advancing the rights of, respectively, blacks and women.

Greenhouse wrote: “The analogy (to Marshall) was based on Ginsburg’s sense of strategy and careful selection of cases as she persuaded the all-male Supreme Court, one case at a time, to start recognizing the constitutional barrier against discrimination on the basis of sex.”

Ginsburg was indeed a legend in her own time. As the leader of what is now a minority bloc of four liberals on the nine-member US Supreme Court, she was celebrated for her outspoken advocacy and trenchant opinions. Widely known as simply RBG, she was the subject of a much-viewed 2018 documentary entitled “RBG,” as well as a best-selling biography “The Notorious RBG” that came out three years earlier.

RBG enjoyed such renown that she routinely got big speaking gigs on a subject about which she was passionate even when she was explicit beforehand that she would refuse to dish on the highest American court or on the myriad political issues which partisanship in Washington has turned into judicial crises.

That subject was opera. Ginsburg was a regular at opera venues throughout the Washington DC area and also in her native New York City. She once gave a very much anticipated address at a popular New York venue, noting as usual that she would not be drawn into politics. Nearly 5,000 people showed up anyway, hoping their enthusiasm would change her mind.

Several years earlier at the same venue, then Supreme Court Justice Anthony had a similar experience. He too attracted a big crowd hoping for high court gossip. Kennedy, whose non-judicial passion was constitutional American history, delivered instead an academic lecture. The audience was disappointed.

Kennedy and RBG’s audiences were similarly frustrated, but the two justices are linked much more significantly by decisions they took late in their Supreme Court tenures.

Kennedy, then 86, resigned from the high court two years ago in what was reportedly an explicit deal with President Donald Trump that Kennedy’s protégé Brett Kavanagh would be named as his replacement.

That’s the way it went down, with Kavanagh the subject of perhaps the most rancorous Senate confirmation hearings in 30 years. But he and his Republican sponsors prevailed.

Ginsburg succumbed to cancer at age 87. But this was no sudden-onset condition. She had been diagnosed with pancreatic cancer in 2009. A favourite of President Obama, she was linked to discussions during his eight years in the White House that would see her resigning so Obama could name her successor.

But unlike Kennedy, RBG turned her back on the idea.

She was clearly reluctant to give up her rock star status any earlier than absolutely necessary. And like many Washington Beltway liberals, she couldn’t imagine that Trump would actually win the 2016 election, so her decision didn’t attract the attention it might have otherwise gained.

We all know how that election turned out. And now the headlines are dominated by the Republican determination to confirm a conservative anti-abortion justice before the likely end of Trump’s tenure as President.

It’s a fluid situation, but the smart money is on GOP success.

Two Republican women have said they will not vote to support a hastily-named Trump nominee. One is extremely vulnerable Republican Senator Susan Collins, who faces an uphill re-election struggle in Maine due partly to her vote to confirm Kavanagh two years ago. The other is Alaska’s maverick Lisa Murkowski.

But since the Republicans enjoy a 53-47 Senate majority, that only brings their margin down to 51-49, and they only need 50 votes to confirm RBG’s successor because Vice President Mike Pence can break ties. It’s not at all clear whence would come the remaining two votes needed to block Trump and Senate majority leader Mitch McConnell, partly after Utah’s Mitt Romney said he would support a vote for Trump’s nominee.

Never mind all the noise about GOP hypocrisy, since they are unapologetically ignoring all the high-minded blather they spouted just four years ago in denying a hearing to Obama’s Supreme Court choice in similar circumstances.

Trump and his allies know they’d better try to sneak this last nominee onto the court, because the probability is that he won’t be in the White House after January 20. And it’s all because Ruth Bader Ginsburg decided to bet on Hillary Clinton’s success and Ginsburg’s own continued survival four years ago.

Trump is out campaigning these days. He’s out in the sticks in swing states, trying desperately to rally his base of undereducated white men. On a recent visit to Minnesota, he avoided big cities like Minneapolis and St. Paul. Instead, he landed in Bemidji, a city of some 56,000 in far north-central Minnesota.

He would expect to attract farmers, retirees and some miners from the eastern part of the region.

Edging closer to dispensing with code words and simply coming right out with an overtly racist theme, Trump started talking about genes and superiority. Here’s some of what he had to say:

The racehorse theory holds that it makes sense to buy the horse with the best pedigree, because breeding is a huge key to success in horse racing. Applied to humans, this becomes a very thinly disguised racist screed. And it was given a fancy name in the latter half of the 19th Century: eugenics.

Eugenics was the brainchild of a British scientist who strove to demonstrate that purity of breeding produced superior humans. Eugenics research was actually supported by major American philanthropies like the Carnegie and Rockefeller Foundations, but the movement died, or least moved underground, until Trump arrived on the national scene.

Unfazed by the fundamentally unsavoury, racist and unjustifiably discriminatory aspects of eugenics, Trump pushes ahead on his nativist course in the face of growing evidence that it won’t work in November.

But are the polls correct in showing Joe Biden with a big lead? A leading Latino academic doesn’t think so. University professor Antonio Lopez has written that: “Trump in his own way has a more sophisticated understanding of how race works in American politics than many progressives or journalists. Trump understands that a majority of Americans may be susceptible to these messages of racial fear and understand them not as racism but as common sense.”

It’s always good to keep in mind that Republicans rarely go wrong in never overestimating the acuity or engagement of the average American voter.

Do you remember when the Miami Heat president Pat Riley named Eric Spoelstra as head coach in 2010? Riley had just pulled off one of the great magic tricks in pro sports history, enticing LeBron James from Cleveland and Chris Bosh from Toronto to join Heat draftee Dewayne Wade in a team that would make four straight NBA finals appearances and win two world championships.

If you recall that day ten years ago, chances are you didn’t think young Spoelstra, the first Asian-American head coach in major American sports, would be up to the job.

But he was, and, still guided by Hall of Famer Riley, he still is. Spoelstra has now been with the Heat for 25 years, rising from the basketball equivalent of the mailroom to a corner office on the top floor. Quite a story.

The Heat are locked up with the Boston Celtics in the finals of the Eastern Conference playoffs, and it might not be too wise to bet against them advancing to the finals, where they would seem likely to face James and the Los Angeles Lakers.

James, avowedly angry at missing out on another MVP title, seems suitably motivated to replace that with what would be his fourth world title with three different NBA franchises.

Greatest of All Time, anyone?