The Supreme Court has blasted the Government and Bank of The Bahamas for "acting in bad faith" and working together against an ex-Cabinet minister in breaching five multi-million lease agreements.

Justice Cheryl Grant-Thompson, in a July 24, 2020, verdict, ruled that the pair had gone "hand in hand with each other" after the Minnis administration decided not to follow through with its predecessor's plans to rent space in Leslie Miller's Summerwinds Plaza property for multiple public sector agencies.

In finding that the Government had committed "an abuse of the court process" by providing "no reasonable defence" to the claim from Mr Miller and his eight companies, Justice Grant-Thompson said the only matter to be determined is the amount of damages the former MP is entitled to. 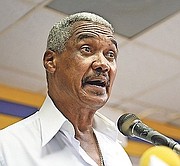 While she awarded him an initial $9.846m for "breach of contract", representing the Government's $8.476m in rental arrears from December 1, 2016, to the date Mr Miller's action was filed, together with a further $1.371m, the judge's ruling left the door open to further liability for Bahamian taxpayers.

For, having declared that the five leases "are valid and binding upon the parties", Justice Grant-Thompson said the former Cabinet minister would be entitled to further compensation should the Government elect not to now proceed with renting space at the Tonique Williams Highway property.

The judgment makes clear that Mr Miller is also seeking special damages of a further $9.118m, representing some seven years worth of rental income, plus the recovery of $425,000 that was spent on renovating the Summerwinds Plaza to make it fit for the Government's requirements.

Damian Gomez OC, Mr Miller's lead attorney, yesterday suggested that damages to his client could "go to about $80m". He explained: "If you look at the specific provisions of the lease, the Government was advancing a loan payment [to Mr Miller] to build a mezzanine, which effectively doubled the space of the rental area.

"Not having completed it, Leslie can claim for loss of rental income that would have come from that rental space, which effectively doubles his claim." Arguing that all Bahamians should be concerned about the Government's willingness to renege on its obligations, and not follow through on binding legal agreements, Mr Gomez said he had no concerns about the Government's planned appeal.

"I'm not worried about it. I've seen what they're trying to do. We will prevail ultimately," he added. "This is a big fight. Leslie's got to be patient but we're going to win ultimately, so I am not concerned about it."

Pointing out that binding contracts should transcend politics and changes in administration, Mr Gomez said: "You ought to be able to rely on a government contract. The promise of the Government ought to be sacrosanct. The fact it doesn't ought to be something we're all concerned about. There's no real reason for reneging on your obligations."

However, the ex-minister of state for legal affairs described the Government and the Bank of The Bahamas - rather than Mr Miller - as the "drivers" of the lease arrangement. He said this was designed to address the BISX-listed institution's exposure to Mr Miller and the plaza, which was around $25m-$28m.

"Bear in mind that the Government and Bank of the Bahamas were essentially the drivers of this deal, not Leslie. The Government was essentially propping up Bank of The Bahamas in relation to a loan arrangement they were involved in," Mr Gomez said, noting that the former owns 82 percent of the bank through the Treasury and National Insurance Board.

"They were faced with a problem with the Central Bank, as it had essentially taken the position with respect to Bank of The Bahamas that given the debt ratio of Leslie's group of companies to the bank's total portfolio, the bank could not do any further loans to Leslie or his group. It was so large that the bank had to save him to save itself."

The Government agreed to the lease to sort the situation out, thereby enabling Mr Miller to meet his obligations to Bank of The Bahamas through the rental income while also increasing and repurposing the space at Summerwinds Plaza to suit its purposes.

While this may raise eyebrows with some observers, Mr Gomez said: "This is a situation where the Government was seeking to mess up somebody using technical means to do it. The Government changes, and all of a sudden he's a pariah, and no one says why."

Justice Grant-Thompson, in her judgment, noted that the PLP-controlled House of Assembly passed a resolution in 2014 permitting Mr Miller and his companies to enter into rental contracts to lease space to government agencies.

Two leases were entered into for the Summerwinds complex in May and June 2013, but "significant renovations and structural work" were required to make the property ready for the Government agencies.

Financing for the upgrades was obtained from Bank of The Bahamas via a $2.5m "upstamping" of the mortgage it held on Summerwinds, and $185,000 was received by Mr Miller and his companies. However, nothing further was received, and the former MP alleged the bank breached the contract to finance the renovations.

The 2013 leases were replaced by fresh ones agreed between Mr Miller and the former Christie administration in 2016. However, the ex-Cabinet minister argued that the Government now "set them up to fail" by only providing a partial $344,802 advance on a $4.787m rental payment to finance the renovations.

Justice Grant-Thompson said the attorney general and treasurer, the two government defendants, both "accepted the veracity" of the 2013 leases and 2016 deal to provide new ones. However, they denied - and did not accept - that there was any commitment for the Government to finance the the renovations.

The judge, though, said it was well aware that Mr Miller and his companies could "ill afford" to finance the renovations themselves. And Bank of The Bahamas, which was government majority-owned and controlled, knew that the lease agreements were "the principal security" for the loan sums that had been advanced.

"It was submitted to me that proof of this is shown in that when the Government sought to rescind the arrangements and provide what I view as technical reasons to end the contractual arrangement, the bank correspondingly sought to liquidate the loan arrangement," Justice Grant-Thompson wrote.

"Both of these parties, the Government and the bank, appeared - if I were to adopt a Bahamian phrase - 'to go hand in hand with each other'." She added that the two sides knew Mr Miller would be placed in "the unenviable position of being unable to fulfill his obligations" if the upgrade funds and rental payments were not made, bringing the contract to an end.

"In my view they did not act in good faith in deliberately withholding the agreed rental advances and, having failed to do so, should not benefit from the consequential breach of contract," Justice Grant-Thompson ruled. "This is one government, and I do not accept that 'the right hand did not know what the left hand was doing'. In my view they were all acting together.

"The Government had to have known that the plaintiff [Mr Miller and his companies] was 'asset rich/cash poor' when they entered into these arrangements whereby an important part of the contractual triangle was the delivery up of properly-appointed premises, and that Bank of The Bahamas was to provide the necessary funds for the renovation, further bolstered by the anticipated rent."

While Justice Grant-Thompson declined to rule that the Government and bank had concocted "an unlawful conspiracy to deliberately injure" Mr Miller and his interests, she noted that the BISX-listed institution issued him a "notice of default" within five days of the May 10, 2017, general election and demanded he repay the total sum owed.

The judge also dismissed the Government's claim that the lease was invalid because Mr Miller and his companies had failed to provide Tax Compliance Certificates (TCCs) for the Summerwinds Plaza as mandated by the Financial Administration and Audit Act.

But, she noted that these requirements - which businesses must comply with to do business with the Government - are subject to "ministerial discretion". And, with the annual rent payments to Mr Miller amounting to some $4.5m, Justice Grant-Thompson suggested the Government could simply have deducted any taxes owing from this sum and paid them to the relevant agency.

The Government also argued that Mr Miller and his companies had no standing to bring the claim because Summerwinds Plaza is currently in the care of the Deloitte & Touche accounting firm, acting as receiver-managers on behalf of Bahamas Resolve, the Bank of The Bahamas bail-out figure.

But Justice Grant-Thompson dismissed this on the basis that there would have been no loan default, requiring that the debt be transferred to Bahamas Resolve, had the Government followed through on the lease deals and paid the rent. However, she has invited submissions on whether the monies should be paid to the receivers.

Acted in bad faith giving you all that money knowing that they were not going to get it back............ at least not into the bank. I saw that expose some years ago when they showed who all big shots and ting what owe big loans And ting and ain’t paying nuttin back. And luffing Dey head off in we face.

And NO. I did not read the article.

That was 2016... MIllier still nail the government,. I guess business, friendship and politics don't mix.

What you mean when you say He nail the government? U mean he tief we tings? How much millions in loans? An he da one what ein pay he electric city bill?

This story, if read carefully, exposes what is truly wrong with our country. It appears to me that all of the actors in this story are petty, greedy, crass and tribal political animals, and really truly care more about themselves than the well being of The Bahamas. The lawyers make out like bandits, as they always do. The taxpayers get shafted, like they always do. And, politicians get to talk, talk and do more talking while saying absolutely nothing of truth or of reality. Our "judicial" system is a farce, due simply to the pervasiveness of petty politics infecting every aspect of this country's existence. The ultimate question in all of this, is who wins and who loses? Once again, in The Bahamas, the scammers win and the public loses. Why can't we identify an opportunist, and why do we keep voting for them?

Couldn't agree with you more. The Courts have now become endorsers of large scale corruption by past and present government officials alike. By rewarding such corruption, the Courts enable a double-dipping by the beneficiaries of corruption at the taxpayers' expense.

Very good Purcupine. On ""' judical"' being a farce, one must bear in mind that despite widespread readers of Daily newspapers of documented written articles on the Bank of the Bahamas seems necessary to do roll call judges to recuse. Many Judges should recuse themselves if any way directly or close affiliations or alleged previously being Directors of the Board of the BoB and not take these cases. Full total independant Commission of Inquiry needs to be started and empowered to start into all dealings of this bank dragging on for some time now. Imagine shares used be be in region of $12 dollars and despite hundreds of millions of Taxpayers dollars injected by politicians before and after Court million dollars cases no National Enquiry or Commission effected

@Proguing, I believe you have asked the most interesting question for ALL TAXPAYERS ....because in these Court awarded Costs etcetc and being on the Budget will be, by the, you guess it... Govt Legislators.

Many Legislators who still there are and has been responsible before for Legislating or otherwise accountable for putting hundreds of $millions of Taxpayers dollars into Bank are clearly wasting propping it up ...and now worsening position now, continuance BEFORE Court cases Why previously Legislators prop it up knowing inherent conditions, further challenges going deeper into hole.