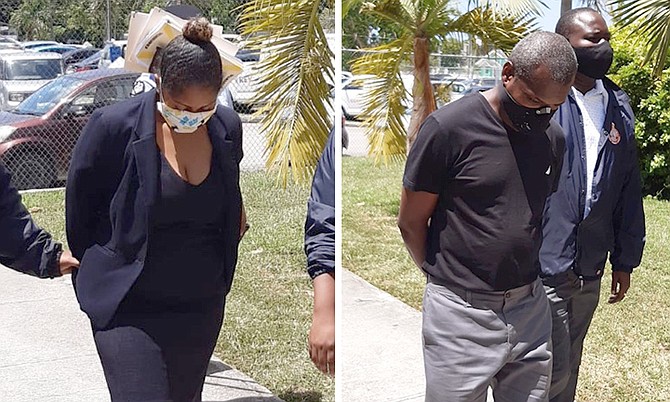 TWO employees from the Department of Immigration were arraigned in the Magistrate’s Court on Friday after being accused of committing a number of fraud-related offences.

It is alleged that sometime between March 1 and September 1, 2020, the two conspired together to commit fraud by false pretenses.

Officers also allege that the duo, sometime between March 1 and July 14, fraudulently obtained $2,600 from Raymond Bubel by means of false pretenses while being concerned together.

During Friday’s hearing, Frazier was also charged with two counts of possession of a forged document and two counts of uttering the same after he was found with a false Bahamas Department of Immigration Naturalisation Unit letter of permanent residency application – approved under the name Raymond Bubel — on July 9 and July 14.

Meanwhile, Brown was accused of forging the false documents on the same days in question.

It is alleged that on July 9 and July 14, she forged a Bahamas Department of Immigration Naturalisation Unit letter of permanent residency application, purporting the same to be genuine.

As a result, she was charged with two counts of forgery.

Both pleaded not guilty to the charges and bail was denied.

However, although the defendants were denied bail yesterday, their counsel told the court they had planned to submit an emergency bail application to the Supreme Court.

The case was subsequently adjourned to November 5 for trial.