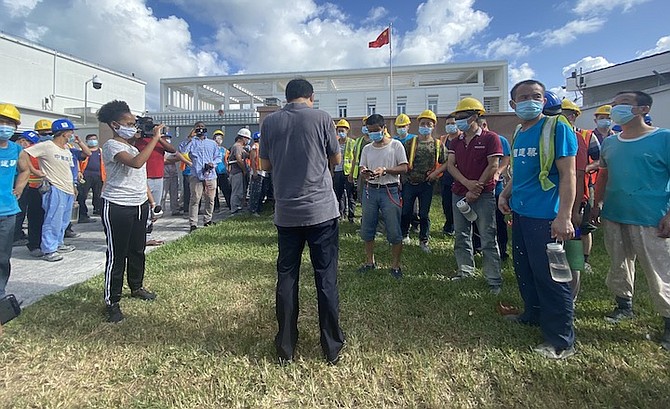 Chinese workers from The Pointe outside the Chinese Embassy on Tuesday.

What a topsy-turvy week it was.

An outbreak of home sickness at The Pointe, a ‘Brave’ return home, a constantly gallivanting party chairman, and the sad end to ‘hookie’ in The Bahamas.

Let’s have a closer look.

Irony is rife in The Bahamas. A perfect example is the happenings at The Pointe.

Earlier in the week, reports broke of a mass strike by Chinese workers at The Pointe project on Bay Street and a subsequent peaceful protest in front of the Chinese embassy on East Shirley Street.

The first point (no pun intended) of irony is that foreign nationals were allowed to strike and peacefully protest without incident.

The second point of irony, is how poorly as a nation are we dealing with the global COViD-19 pandemic?

One has to ask when hundreds of Chinese construction workers prefer to return to their homeland, China, which we all know has its COVID-related issues.

From the initial outbreak in Wuhan to the daily battles keeping the deadly virus in check, and they still prefer to take their chances there.

If the Chinese workers wish to return home, I feel the necessary arrangements should be made.

I don’t support foreign workers or foreign nationals being held against their own will, and freedom of mobility is a basic human right.

So arrange a charter with the Chinese embassy to facilitate their return, bid them ‘Zàijiàn’ (good bye in Mandarin) and let them return.

However, in the process please ensure that all remaining work left unfinished at the Pointe is completed by Bahamian workers.

Initially when opposition leader Mr Phillip ‘Brave’ Davis decided to have his case of COViD-19 treated by his daughter, a highly qualified physician in Atlanta, Georgia, it was met with some raised eyebrows and political spin doctors going to work feverishly trying to put the perfect spin on the whole story.

Truth be told, if I have an illness and I also happen to have a child that is a brilliant doctor offering to treat me, I’m accepting the offer from my progeny and informing them they are also going to foot the bill, right after I explain to them who paid for them to become a doctor in the first place!

I have no brief with Mr Davis in this regard, carry on smartly ‘Brave’.

Speaking of carrying on smartly, ‘Brave’ did just that upon his release from hospital in Atlanta, earning cool points in my book and many others as he wore a black Adidas sweat suit, reminiscent to legendary rap group ‘Run DMC’.

‘Brave’ was definitely rocking his ‘Adidas’ with some pep in his step and glide in his slide, proving once and for all that rumours of his demise were greatly exaggerated.

Now if he can get the PLP’s candidates for 2022 looking just as good, the PLP just might be in business! 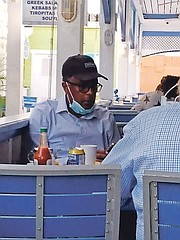 Fred Mitchell in a picture circulating on social media.

Where in the world is PLP chairman Fred Mitchell?

Allegations were swirling when Mitchell spent about two weeks out of the country receiving his annual physical in Minnesota, then turning up in Atlanta for his party leader’s release from hospital.

Now he’s in Freeport allegedly, not quarantining nor social distancing, especially by the looks of a photo captured yesterday in Grand Bahama.

It’s obvious that Mitchell hasn’t changed a bit, he’s still enamored with constant travel and jetting off to somewhere for something!

Consistently finger-pointing and bashing the government from his various jaded platforms, including the same infractions he is presently committing himself with no apologies.

This country needs a functioning opposition, ready to serve with a concise plan forward, holding the present administration accountable on their actions and decisions, and being a voice for all Bahamian people.

Also it’s an opposition which is trying to earn the country’s approval at the polls in 2022 after a dysfunctional run their last time in office.

More of the ‘same-old, same-old’ from Mitchell could be a major liability.

Mitchell’s antics at this point are counterproductive, as he embodies everything the many Bahamians dislike about the PLP party, which will make them hesitant to give the PLP another chance. You know how the old saying goes...you know... the one about the leopard and his spots!

My blood ran cold the other day when I read a Tribune article about correctional officers who were accused of using forged sick certificates to get time off from work in 2018 and 2019 who will appear before the chief magistrate for sentencing. Turns out both officers received a sentence of more than a month each for their infractions.

I’m quite sure the entire Bahamas heard the news. I’m also quite sure joe public and certain physicians in The Bahamas were shocked.

It has long been a part of the Bahamian culture to get a sick slip if you wanted a few days off from work to handle your business.

Most businesses collect the sick slip from employees, file it, and keep it moving as it has become such a part of the norm.

I left the topic being discussed candidly in the barbershop yesterday, where there were a wide range of emotions floating in the air. From now on, ‘duckers’ and ‘ghost movers’ throughout the 242 will have to change their ‘hookie’ game up. Some are in a quandary as what to do. Might I suggest a solution?

I have two words for you - deep cleaning.

Do the math. If your office has to be deep cleaned, that’s 14 days off! Minimum. Think about it ‘duckers’, it makes perfect sense. You can thank me later.

Did you see the picture with the PM sandwich between two men with his mask by his neck? He said he does not drink. who knows he might have been injected.

If the Bahamian people are better off under the FNM then vote for them again The people time voters deserve the FNM and doc.

The FNM Government has done nothing to improve the lives of the average Bahamian. One of their biggest supporters in Grand Bahama told Turnquest they the FNM have been a disappointment and this was before COVID 19. Dysfunctional that is FNM all the time. pay attention to our Lucayan

The writer misses the point as to why Davis fleeing the Bahamas as he did left such a bad taste in so many mouths. Most Bahamians could not care less how Davis spends his own money, assuming of course it was obtained and spent legally. But most Bahamians rightfully have a beef with current and past senior elected officials who have allowed our public healthcare system to become so terribly dysfunctional and inadequate through their failed government policies and tolerance of rife corruption.

And it's these same incompetent and corrupt senior elected officials who have the best health insurance that money can buy, all at the taxpayers' expense. Whereas they have the ability to obtain good healthcare abroad, the vast majority of Bahamians are stuck with the wholly unsatisfactory public healthcare system that these elected officials have created for us by decades of neglecting our country's most vital needs. That in a nutshell is the real beef most of us have about Davis fleeing the Bahamas as he did.