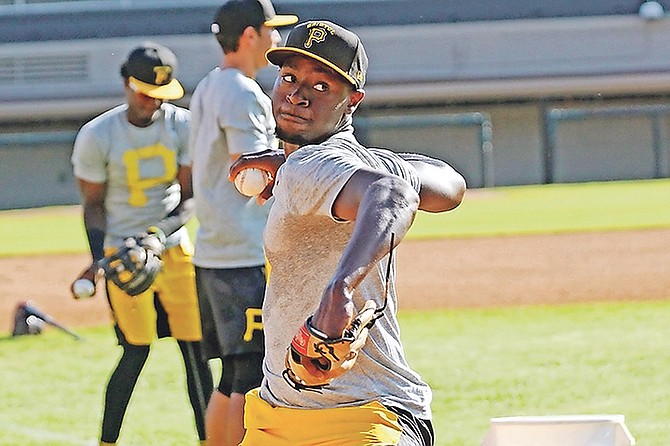 THE premier pitcher in the Bahamian minor league pipeline, Tahnaj Thomas’ performance at the Pittsburgh Pirates’ instructional league has the team looking forward to a new addition to his skill set.

Thomas told MiLB.com that he worked on developing new pitches this offseason at instructionals in Bradenton, Florida. The 6’5” right hander said he intends to add his “slurve” and change-up to his 97-99 mph fastball to create a three-pitch arsenal.

The cancellation of Minor League Baseball in 2020 meant the Pirates’ No. 15 ranked prospect missed a season to possibly improve in the franchise’s rankings.

“I’d say I just lost another opportunity to showcase myself in games,” he said to MiLB’s Sam Dykstra. “But honestly, I felt in 2020 since we did not have a season, I thought that it was an opportunity for me to learn myself and learn my body and really understand what I had to work on. Coming out of Spring Training, I felt really good. I felt pretty confident going into the year. I felt really healthy. But then in 2020, I felt since we did not have games, it really gave me the opportunity to break down some stuff mechanically and try to get myself in a better space to be more consistent and to be a better pitcher. I feel as if the opportunity presented itself and I took advantage of it.”

During instructional league play, Thomas was limited to two to three innings per start.

Last season with the Bristol Pirates, Thomas got the start on both opening day and in the regular season finale. He finished with a 2-3 win-loss record which also included 59 strikeouts - the most for any Bristol pitcher since 2012. In 12 starts, he pitched 48.1 innings with a 3.17 ERA and 1.12 WHIP.

In the regular season finale, Thomas allowed just one run on four hits over five innings with five strikeouts in the Pirates’ 4-2 win over the Danville Braves.

While at home in The Bahamas, Thomas worked during extended lockdown periods and exchanged videos with Pirates pitching coaches to continue his progression.

“I would say we worked a lot on getting into my backside more and driving driving down the mound,” Thomas said.

“And that was our main focus during instructs too. I’m just getting into my back side and driving and being more efficient going towards home plate.”

In 2018, Thomas was traded to the Pirates organisation from the Cleveland Indians alongside Erik Gonzalez and Dante Mendoza in exchange for Jordan Luplow and Max Moroff.

As a rookie he appeared in eight games (six starts) in the Rookie League and recorded a 4.58 ERA and 1.20 WHIP with 27 strikeouts in 19.2 innings. The 19-year-old right-hander was assigned to the AZL Indians 1 in the Arizona Rookie League.

He noted the energy around the Pirates organisation as they look to rebuild for the 2021 season.

“We’re in a rebuild mode. I feel like it’s been talked about, but everyone’s on the same page with what our focus is and what we’re trying to accomplish.

“I feel as if everyone’s open to feedback and open to what we’re trying to do. I feel that that’s what is helping our prospects and our players get better on a daily basis,” Thomas said.

“Coming out of instructs, it was a little different. The approaches we took were different. I can’t speak for everyone, but it seemed like everyone had a pretty good time, got some good work in and pointed us in the right direction.”

Thomas spent the bulk of his amateur career as an infielder but was signed by the Indians in 2016 as a pitcher. It would turn out to be a move that changed the trajectory of his career.