Insight: We Need To Tread Very, Very Carefully However Appealing Opening The Borders May Appear 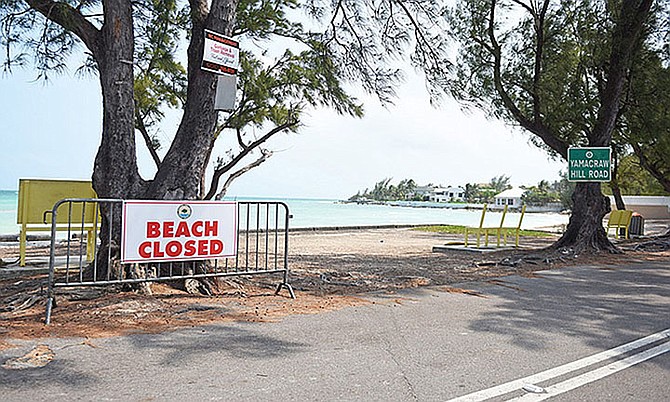 IT has been, without any exaggeration, a gruelling two months of lockdowns and curfews. On one hand, the good news is that based on our coronavirus-related death toll and number of cases, the measures put in place have proven effective on the mitigation front – though this must be said with a footnote as a result of a lack of mass testing. Nevertheless, while we recognise what has worked, we cannot deny the immense burden placed on the Bahamian people. And now, with reports of people clamouring for the opportunity to travel once international borders reopen, The Bahamas’ tourism industry may be on the verge of a much-needed stimulus. Still, our readiness remains in question.

“Airlines are indicating, particularly for July and August especially, the uptick in demand, people booking. It’s taken us a little by surprise, so I use that term cautious optimism that we will see a rebound. Of course it’s going to be slow, it’s not going to be a quick one, but we’re seeing one,” she said.

Indeed, the fact we’re receiving this kind of interest in what is typically slow season alone is great news. However, before we sing praises of joy from the rooftops, we should take a more detailed look at what Ms Jibrulu shared.

Noting that 90 percent of our visitors arrive to our shores from North America - the US in particular, our number one source market – we cannot look at their interest in coming here in isolation. While it is great that 75 to 83 percent of survey respondents in the US have said they are ready to travel, this is likely guided by an impulse to unshackle themselves after being cooped up in their homes for months.

With countries exhausted from the stranglehold the coronavirus has had on the global economy, the fatigue of citizens around the world has created a golden opportunity for capitalists to exploit. With the conservative advice of health officials being tuned out on Capitol Hill, economic engines are revving up.

While our decision makers have leaned on the conservative side, there has been no indication US visitors will be turned away. We’ve already heard the Minister of Tourism say cruise ships, synonymous with nightmarish accounts amid the pandemic, will be accepted once they resume travel.

Certainly, it is easy to pretend we can all just go back to normal. Why not? Cases are down and the hot weather minimises the spread of the virus, does it not? More scientific minds and those erring on the side of caution may tell us not to move so fast.

Top infectious disease expert in the US Dr Anthony Fauci is one such person who maybe doesn’t see the cup as half full. Rather, he just sees the cup for what it is.

With no vaccine coming before the potential of a second wave in the autumn, Fauci seemingly sees this as a powder keg moment. Speaking about US states opening too quickly, he believes “consequences could be really serious”. Not sure what the thinking has been around this for the brain trust at the health and tourism ministries here at home, but it doesn’t seem there is much concern with the US currently still being the epicentre of the virus.

The challenge that exists is that after being shut in, people are ready to break loose and get back to a normal life. Unfortunately, the disconnect is that doing so right now is not feasible. But for policy makers, particularly those more concerned with high approval ratings, caution is being thrown to the wind. That said, the Competent Authority must act in what is in the best interest for Bahamians. Surely, it is important for the economy to get up and running but doing so without good sense practices runs the risk of sidelining our labour force yet again.

In that vein, we should really be concerned about cases in our major source markets such as Florida and New York. For example, Florida’s cases spiked at the end of last week. And despite major festivities being cancelled for Memorial Day Weekend, South Floridians may likely put social distancing practices to the test.

Simply put, opening our borders for travellers from the US while they are leaning on numbers that imply decreasing cases without mass testing ever taking place is a gamble.

Especially while we have yet to hear about mitigation strategies employed by the hotel industry and, even more importantly, at the border, people need not only focus on getting back to work. Getting back to work is the easy part. Staying there, however, may pose a significant challenge if infected people enter the country. And something we should not want to do is to open up unprepared, only to close everything back down and potentially damage consumer confidence.

While on the topic of confidence, the ragtag handling of people coming into the country and other mishaps did not do much to make the Bahamian people feel more comfortable with a July opening of the country. Initially prescribed by the Prime Minister as a Phase 5 initiative in the reopening plan, we are currently still in Phase 2. And while we may be progressing well, we must not jump the gun, only to endanger our citizens and end up shutting the country back down. The reputational damage we may suffer for Americans giddy for the opportunity to travel before the potential second wave hits would likely be debilitating as Bahamians would again be unemployed.

Of course, we cannot continue to live like this in perpetuity. However, well-reasoned strategies must guide us – not just responding to what America is doing. Because as we can see, a mixture of cabin fever and false confidence is leading to a lot of brash decisions.

Just as slow and steady wins the race, a tempered approach will also save lives and, in the long-run, the economy.

This decision should be determined by the relative per-capita active infection rates in the US (currently 0.35%) versus the Bahamas (currently 0.01%) - this sets the numbers of bullets in the chamber as we play Russian roulette. At the moment, the chamber is full, and it will be many months, if ever, before there's even only 1 bullet in gun. The only way out of this difficulty is to offer "quarantine" vacations - all incoming passengers must be totally sequestered at their beach resort, which would be staffed by Bahamians who have recovered from Covid-19, or at the least by staff using full PPE.

Seeing how the United States citizens crowded beaches and thoroughfares over this past memorial day holiday and threw all caution to the wind - we will have to see the results if this close crowding and facemask free environment plays out over the next few weeks and decide whether we want these people here. Let's see how this experiment works out with these volunteer labrats!

Good article. We all want our tourist industry to be up and running as soon as possible. Unfortunately for as long as Trump led USA continues to operate without a clear strategy for dealing with the pandemic, American tourists are going to represent a grave risk to The Bahamas especially if we open up too soon and are unprepared for any increase in COVID cases. The Government must use this time to properly prepare for the inevitable increase in cases when we do finally open up.

Can the writer and others who support a continuation of the lockdown please provide how they expect the Government (as it will have to be them) to provide enough money for all those people who will be without a job (the thousands at Atlantis, BahaMar, all the other hotels, taxi drivers, tour operators, vendors, retail stores, restaurants, bars and on and on). That is support these people until a vaccine is found. This will be with us for a while, coming back in waves. WE as a country do not have the luxury of not opening, unless you want a complete collapse of society and all the additional problems that brings (try running PMH if the Government has no money).

Dawes, this pandemic did not create these problems. They only exacerbated the structural inequalities that exist. Proper planning prevents poor performance. We have placed little to no emphasis on planning ahead, either as families, nor as a country. There is more than one reason for this short-sightedness. I don't think the writer is supporting a lockdown. He is advocating for reasonableness and caution. Any mature adult would say the same thing..There is no doubt, as the writer clearly empathizes, that the lockdown is taking its toll on everybody. I think the writer wants to open up just as badly as you. However, for once in our history, could calm, cool, collected and intelligent public interest decisions be made on our behalf.

All great, but as you said we haven't done any of that planning. What is your criteria for opening? Is it when there's a vaccine? Or only for countries which have no cases (which in effect means no tourists, and especially none from the US for a long time). If either of these then the chances of most businesses making it through this is slim, and the chances of the country making it through is even slimmer. So in effect you are in the position of not opening and damning the country or opening and hoping you don't dam the country too much. AS you can probably tell i would choose the latter.

All I'm saying is that many, many health experts are saying it is likely a bit too soon.

Wow, an insightful, research and data driven article..... I could get used to this! no echoing of what "da Minister also said....". You know those people who wander outside giggling during the eye of the hurricane, against the advice of sober folk? They're the ones screaming for help once caught in the storm having strayed just a bit too far from home.....human nature spans a spectrum.

Great article. But let’s look at the reality. Let’s say everyone has a negative Covid test in the past 10 days. This means they didn’t have the virus when they took the test(which is basically the waste of the test). Now they get on a cruise ship with thousands others. Disembark in Nassau. Come down with a bad cough and 102 fever during the day. Does Nassau keep that person? Can he go back on the ship? Do they have to contract trace the whole ship? What if there are more infections. Will the US let them dock or does the 3 day cruise turn into a 14 day quarantine? There are so many protocols that have to be put into place. In Korea, one man who went to 3 nightclubs in 1 night infected 168 others. You really think the Big Petri Dish (read cruise ship) won’t be a disaster? Has the Bahamas spent the last 3 months gathering PPG, ventilators, outfitting the family islands with PPG and ventilators? I think we all know the answers. I think we all realize the Bahamas has to open up or the government and the people will have too big of a hole to climb out of-but it is not going to be easy.

Agreed, but the hole is, and, has been gaping.for some time now.

Interesting and sensible comments are a pleasure to read. However, let us recognise the fact that there is a lot that is not fully understood about this viral outbreak. While missteps have been made and quite possibly will continue to be made, all the while economies are being destroyed. This predicament does not lend itself to an easy solution that will prove satisfactory to all parties involved.