Serena Trying To Make The Best Of Life In Iowa 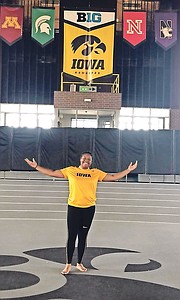 BAHAMIAN female national discus record holder Serena Brown is trying to make the best of her living situation in Iowa.

WITH the resurgence of racism and another spike in the coronavirus in the United States, Bahamian female national discus record holder Serena Brown is trying to make the best of her living situation in Iowa.

The St Augustine’s College 2016 graduate is adjusting to her new environment after she made the transfer from Texas A&M, where she completed her first two seasons for the Aggies, to the University of Iowa in the fall of 2019, although she has yet to suit up for the Hawkeyes.

Brown made the transfer as a red shirt junior while she was recuperating from surgery in College Station, Texas, to repair her right rotator cuff.

Now fully healthy again, she was forced to take the sidelines again due to the deadly coronavirus. “Like everybody else, it isn’t easy,” Brown told The Tribune yesterday. “They still haven’t opened the facilities here so that I can continue my training and I don’t have a backyard to do my training.”

While she witnessed the protests going on as a result of the death of African American George Floyd by a white policeman on May 25 in Minnesota, Brown said she has to be extra careful whenever she ventures outdoors. “I have to make sure that nobody tries to do anything to me, so that has added another level of difficulty for me,” Brown pointed out. “I normally go around the neighbourhood to train, but now I have to be extra careful.

“I am just trying to take it day by day and just stay close to my house. When I do go out, I try to go out and do what I have to do as quickly as I can and get back home. It’s really easy here, but that’s how it is all over.”

After forfeiting her indoor season to train, Brown was preparing for the outdoor season at Iowa when the coronavirus spread in the United States in March, forcing a complete shutdown of all sporting activities.

“Now with this second wave of the coronavirus in the United States, I’m just trying to take it day by day,” Brown said.

“I’m thinking about the future, but there is so much uncertainty right now that I just have to take it day by day.”

With those uncertainties, Brown has to put all of her dreams and aspirations on hold as well.

“I know the BAAA (Bahamas Association of Athletic Associations) is getting ready to hold their nationals at the end of July,” Brown said. “So I might just decide to come home and compete in it just so that I can have something to gauge off since I didn’t have an indoor season.

“But I’m concerned that if I come home to compete and I get hit in a second wave of the virus, I will have to be quarantined. So I’m just trying to take it one day at a time. It’s so frustrating not knowing what will happen. I am just trying to get my mental game together.”

Nevertheless, she’s thankful for the support base that she has. “My friends and my team-mates and the coaches here are all really supportive,” Brown said. “I could really go to my coach (Eric Werskey, the assistant coach for throws) with any problem that I have and he would encourage me to try to do this and do that so that I won’t be overwhelmed.

In communicating with her parents, Whittington and Sonjia Brown, on a daily basis, Brown said if there is one thing that she misses from being in Texas after she left home, it’s the weather. “I didn’t expect it to be this cold here in Iowa,” she said. “Plus, I really didn’t get to spend as much time as I wanted with the team as I wanted to because we practice in groups at different times.

“And since I didn’t compete indoors, I was training getting ready for the outdoors and to be able to bond with everybody. But this corona thing happened. So I just have to try to deal with getting adjusted to the weather here in Iowa.”

The move from Texas to Iowa also saw Brown make a change in her major from construction to business and technology.

But like the move from one athletic programme to the next, Brown said she’s enjoying it.

“I moved here because I felt I could succeed very well in this environment with the coaching staff and they have the national champion at this school, so when we train and compete, there is someone that I can rely on to help push me because we are both around the same age,” Brown said.

The 21-year-old Brown said her ultimate goal right now is to stay healthy and injury free. She admitted that she misses being at home, not just because of the weather in Iowa, but the fact that so many things are going on in the United States.

While she didn’t get to compete since moving to Iowa, Brown was able to concentrate a little more on her studies as she completed the semester on the Dean’s List.

Once she gets back in competitive mode in the field, she’s looking to improve on her Bahamian national record of 198-feet, 1-inch or 60.39 metres in the discus that she set in 2017 and her lifetime best of 47-6 1/4 (14.17m) in the shot put. But only time will tell how things will play out in the aftermath of the COVID-19 pandemic.