'My Honour's Deserved - And Long Overdue' 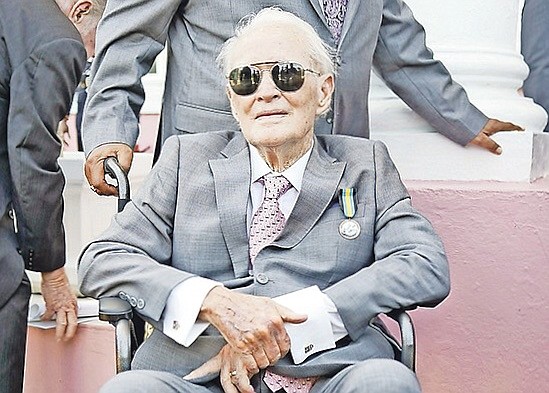 BUSINESSMAN and former Olympian Godfrey Kelly, 91, yesterday defended his knighthood saying he expected the award “earlier” and views it as government making “amends” for neglecting to recommend it after his decades of contributions to the country.

Over the weekend, it was announced the former United Bahamian Party education minister would be bestowed Queen Elizabeth’s 2020 New Year’s Honour of Knight Commander of the Order of Saint Michael and Saint George (KCMG). In this instance, the award was for Mr Kelly’s contributions in the business and sports communities.

The award has come under fire from the Progressive Liberal Party, its Leader Philip “Brave” Davis saying he was “appalled” by government’s recommendation to knight Mr Kelly.

Yesterday, the former minister in Sir Roland Symonette’s Cabinet said he doubted the Opposition’s criticisms would get them more support.

“Well you know when Sir Geoffrey (Johnstone) got his I should have gotten mine. I just got a CMG and he got a KCMG so they made amends,” Mr Kelly told The Tribune.

“I expected it earlier,” he said when asked if he saw the honour as long overdue. “I am quite happy. Even though I have already won I can’t jump around (because) I’m 91.”

Speaking of his contributions over the years, Mr Kelly said he has long “given a lot” to the Royal Bahamas Police Force and was an attorney for 66 years, adding he retired not long before his knighthood was announced.

He’s also contributed much to sports, particularly in the sailing arena.

“I have always helped,” he said.

Responding to the PLP, Mr Kelly suggested he was not surprised by the party’s attacks.

“Well, of course,” he said when told the opposition felt he was undeserving of this award. “You can’t stop the opposition. They say everything that they can to hurt you. They should have been more gracious.

“I don’t think they are going to get anymore votes by hammering me.”

His wife Sonia said she believed he deserved the recognition, noting she had been by his side through years of sacrifice and hard work.

She said: “Well I am very thrilled for him, absolutely. It’s too bad it’s so late in coming, but better late than never.”

On Monday Mr Davis told The Nassau Guardian the situation raised questions over what the governing party was saying to Bahamians.

He also questioned whether the knighthood was an effort by the Free National Movement to rewrite history or award people with ideologies that treated Bahamians like second-class citizens.

Mr Davis said those with knowledge of the UBP’s educational policies during Mr Kelly’s tenure as minister “would be appalled that he is being awarded such a prestigious award”.

PLP Chairman Fred Mitchell also chimed in saying he disagreed with the recommendation.

Former National Security Minister Tommy Turnquest was among the 2020 honours for Commander of the Most Excellent Order of The British Empire (CBE) and FNM Chairman Carl Culmer received the British Empire Medal for service in politics.

In a statement Mr Mitchell said the nomination of Mr Culmer and Mr Kelly displayed a government that is driven by “shameless partisanship” since there was “no objective evidence” to support their awards.

“It appears that Mr Culmer is being rewarded by the prime minister for his very harmful brand of personal political attacks, diatribe and invective while unwittingly providing political cover and justification for every corrupt misdeed by this FNM administration,” the statement read.

He added: “The knighthood for Godfrey Kelly is a continued and studied attempt to rewrite Bahamian history. This is the man who presided as minister of education in the last ignoble UBP administration and was responsible for the education policies that retarded the country’s growth and national development, under educating the black majority in the country. What has he done since then to make national amends?”

He insisted that history should not be rewritten and urged the government to “cease trying to make right what was wrong.”

It doesn't seem in good taste to tell people what you deserve. Humility is always the best approach. IMHO

Agree. His sense of entitlement really says all there is to say about him.

Sir Godfrey was making his contributions while Brave and Freddy had not yet learned bathroom etiquette. Brave and Freddy are spewing history viewed through their own indoctrinated Rose colored glasses. Repeat the lies often in the hope they become the truth? Envy is an ugly trait.

Your ungracious example (bathroom) notwithstanding, I have no issues with your dislike of Brave or Fred. Have no issues with your apparent affection for Godfrey. But, please, let's not try to rewrite history here. Godfrey, in his hey day, was the worst of the worst UBP minister/politician. His bipartisanship and loyalty toward a system that disenfranchised the majority of Bahamians - via denial of education, his overt and willing support of a system that treated the majority as third class citizens and his abject discontent for the majority (all documented, google before you respond to me) is not "the opposition saying stuff to hurt {me}". These are just hard facts. In my view, he, as is the case with many current and past recipients, do not deserve this honour. It is unfortunately another example of a pathetic case of the black man "rewarding" his tormentor because, in this instance, he gave us a sailboat or two. Disappointing, but not surprising.

Repost: When I think of some of the gangsters that were Knighted under various PLP administrations, the destruction of businesses and the raping of pension funds among others come to mind, I can only shake my head at Mitchell and Davis' opposition to someone of impeccable character like Godfrey Kelly being so honored. Their main opposition stems no doubt from their ability to honor themselves having since come to an end.

I personally despise people who give a little with the left hand (so that they could boast) while they take a helluva lot with the right hand and EXPECT to be commended for it.

Few who get these 'awards' are actually deserving. This diminishes the esteem in which these 'honors' should be held!

He and his wife almost sound bitter. Talk about looking for recognition for good works. The Bible speaks of these things. You ought not look to men for your reward. His words are quite telling.

Even at his age he is not gracious . his words the opposition does every thing they can to hurt you.

Has he noted what has happened to officer Strachan and other senior Police Officers under the FNM Government. do they matter, or only you? Sir the only reward you really need at this time is the one required by Saint Peter at the pearly gate. Be very sure you have that one.

Sir Godfrey is well deserving of this honour. Just ask for how many years he has funded the Cat Island regatta, as just one small example. I have always enjoyed his dry wit and great sense of humour. Lesser minds will probably take his remarks about expecting this honour sooner literally.

Colony of Out Islands has but two classifications.Sin and Sinners!
Dead people is what some we see. Comrades "Brave" and Freddy does see the return ghosts Bay Street boys to power. UBP's Godfrey is first and foremost a son soil. It's been 53 years since Sir Geoffrey was the colony's education minister and what could his 53 years long passed - possibly have do with today's terrible conditions at our government schools?

I have no great affection for Sir. Godfrey, however it would be best not to get into a rating of the demons of pre or post independence. Nothing much changed. Suffice it to say unless one lived in that era it would be difficult to envision the criteria of that life at that time. Anything and everything that occurred did so under the Colonial Governor of the day, and therefore under the King or Queen, good and bad.

The UBP, PLP, and FNM administrations are equally responsible for the education policies that purposefully retarded the country’s growth and national development, under educating the black majority in the country.

The proof is undeniably all around us for all to "suffer" every day!

While other countries were busy educating its people the UBP, PLP, and FNM were doing the exact opposite to such an extream that now we have ex-pats dominating whole sectors of the economy such as domestic workers and other low skilled blue-collar occupations that should be strictly reserved for our own low skilled people, and we are totally inundated with Haitians who now equal Bahamians in numbers! What other countries anywhere have ever allowed this type of migration?

The UBP, PLP, and FNM will be held 100% accountable for destroying our country and people just so a handful of pirates across the political divide could prosper!

Time is longer than rope. The UBP, PLP, and FNM Bay Street & Sunshine Boys cartels have run out of rope.

can we please establish some criteria for "contribution to country"? Having a seat in parliament or cabinet or being a long serving MP, cannot be qualifiers because as we've seen the most some of them just bang on the desk. Being a member of a political party and working dilgently on political campaigns for decades is also not a qualifier. being rich and giving money also cant be a qualifier. These awards should be given to difference makers. if all you did was tow the party line, in either party, its not acceptable.

Very sad commentary...racist and cynical... I thought that most educated, productive Bahamians had worked through their innate racist tendencies. After reading the above comments, I fear for ANY fruitful, productive future for my children living in this society of racial hatred and animosity. You all deserve one another. God bless

there's nothing in my commentary tgat was racist. I don't know the man. It would have been nice if there was an objective assessment of exactly what his contribution was something other than "he was an MP for years and he gave some money". I'm going to bet lots of persons have given money who haven't been nominated. These nominees should be outstanding individuals, persons you want to have memoralizedwith statues in the public square. There's no question that the awards have turned into $5 thank you cards by both parties

Hey ThisIsSour, with reference to Sir Godfrey's achievements, he was the first ever Minister of Education when the UDP administration decided that education was so important that it became a Cabinet Post from being merely a department. Betty K, Kelly's Lumber, Kelly's home Store are just some of the businesses employing many Bahamians for decades that he is involved with. Over 40 years of supporting Rev. Prince Hepburn's Star of the Bahamas Charity Guide, Junior sailing programs, and much more that most Bahamians have never, and probably never will, hear about.

Well that's something. Thank you. The next question is Is it enough? Where's the criteria. I shy away from using money as criteria because most people dont have it. and If someone is a millionaire giving 100000 to a cause might be pocket change. I stick with starting with the definition for a difference maker and building criteria on that. And maybe Mr Kelly still qualifies who knows