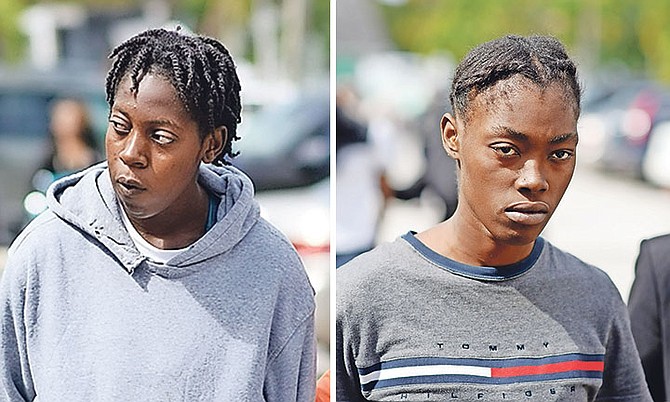 Zaria Burrows and Dervinique Edwards at an earlier court appearance.

A young mother burst into tears and fell to the floor in court in despair yesterday after she and her friend were unanimously convicted of murdering teenage mother Breanna Mackey two years ago.

Zaria Burrows wept loudly and crumbled to the floor of the dock moments after a 12-member jury found both her and Dervinique Edwards guilty of the 19-year-old’s death in January 2018.

Edwards, meanwhile, sat stoney faced when the verdict was announced by the foreman. When the judge asked her if she had anything to say, Edwards replied: “I’d like to say that even though I get find guilty in this court today, I never one day had no intentions to kill no one, harm no one.”

Before taking her seat, Edwards added: “Anyone who know me, know what type of person I is. I do feel bad for Breanna family.”

Given the jury’s verdict, the pair, who were both on bail, were remanded into custody to await sentencing on March 31.

Before being remanded, Burrows had tearfully asked Justice Grant-Thompson to hug and kiss her toddler-aged son, who was being held by either a family member or friend outside of the courtroom.

“That’s the only thing I want do,” Burrows cried.

After doing so, the pair were marched along Bank Lane in handcuffs to be further remanded. Their family and friends, who stood on the side watching them as they passed, offered praises to God despite the circumstances.

One woman could be heard loudly proclaiming things like “God in charge!” And “God don’t sleep and he don’t slumber!”

“I want them put that in the papers!” the woman exclaimed.

Yesterday’s proceedings marked the end of a four month trial concerning Mackey’s stabbing death at the hands of five girls who were supposed to be her friends because they wanted her to pay for a broken $80 Huawei cellphone that belonged to one of them.

Shortly before 6pm that day, police control room was contacted about reports that a woman was stabbed in the Key West Street area off Cordeaux Avenue. Police officers were dispatched to investigate.

Upon their arrival, a woman, identified as the victim’s sister, Latisha Woodside, directed officers to a brown and white apartment complex on the eastern side of Key West Street. On the porch, just in front of door number nine, officers discovered Mackey, semi-conscious, lying face down and suffering from four stab wounds to her upper back and two stab wounds to her right arm.

Mackey, a mother-of-one who had turned 19 the day before, was taken to the Princess Margaret Hospital where she died at 8.28pm.

During trial, the jury heard how Burrows was driving her car in the area of Key West Street with Williams, Edwards, Davanya Lawes, Yolika Domesle, aka “Gabby”, and Matia Sylverain as passengers.

Edwards said when Williams spotted Mackey, she started saying: “See Breanna, see Breanna on the corner,” before asking Edwards to open the car door and let her out. Edwards said her door wouldn’t open, so Williams got out by the door on the opposite side.

Domesle, who was seated in the front passenger seat, then got out of the vehicle and threw a bottle at Mackey, which hit her in her face. Burrows said after that, Mackey’s older sister, Nafetera Brown, consequently told her sister to run, which she did. Williams and the others gave chase.

Burrows said Mackey ended up running in a yard. While fleeing, Mackey slipped and fell in some mud, according to Burrows. Williams then grabbed her by the head.

Edwards, in her interview, said she saw when Williams “snatched” Mackey, and said she thought she was punching the victim. However, she said when Williams drew back her hand, she realised she was brandishing a knife.

When asked how many times she saw Williams stab Mackey, Edwards replied: “All I know is a lot, I couldn’t keep up.”

While that was happening, Sylverain was kicking Mackey, while Lawes was running in the road as if she was making a beeline for Mackey. However, Williams had since stabbed Mackey, and so Lawes ran back to Burrows’ car.

The other girls eventually made their way to the car, which was when Burrows realised Williams had a knife on her the entire time. After Williams drew all of their attention to the bloody weapon, Burrows consequently ordered her to throw the knife out of her car. Burrows then dropped the girls off at their respective homes.

Burrows’ attorney Dervard Francis tried to appeal to the jury to acquit his client, charging that contract to the Crown’s case against Burrows and Edwards, Williams acted “unilaterally and on her own” in killing Mackey.

Meanwhile, Edwards attorney Eleanor Albury asserted charged that based on the evidence led, her client is effectively absolved of any responsibility for the attack as there was no common design to attack Mackey.

Ms Albury said there was nothing in her client’s ROI that remotely suggested that Edwards committed the offence of which she is charged. Ms Albury added that there was no evidence that Edwards encouraged the mobbing, or even got out of the car to participate in the attack.

However, Crown attorney Cassie Bethel successfully appealed to the jury to convict the pair, asserting the pair valued rolling with their “crew” above distancing themselves from the girl’s attackers.

And at no time did one or both of them do anything to “withdraw” themselves from the January 2018 savagery, Ms Bethel charged.

Instead, Ms Bethel said if Edwards in particular played no part in the attack and was so caught off guard as she claims she was, she wouldn’t have gone for drinks with Mackey’s attackers not too long afterwards.

“Didn’t call for help, didn’t get any assistance, didn’t go to the police. They went for drinks,” the prosecutor said.

With their conviction, Burrows and Edwards are the last of the six girls who were charged with Mackey’s murder to either be convicted for the offense or convicted pursuant to plea agreements.

On April 2nd of last year, Justice Grant-Thompson sentenced the woman who did the actual stabbing, Thea Williams, to 25 years in prison in pursuance of a plea agreement her attorney reached with the Crown.

She is further ordered to undergo one year of counselling, inclusive of anger management lessons, and another year of probation upon completion of her sentence. She will be 46-years-old by the time that comes around.

Meanwhile, an 18-year-old woman whose name has been withheld because she was charged as a minor, was sentenced to 12 years in prison in connection with Mackey’s death. She is also ordered to serve one year’s probation after completing her sentence.

The following week, Davanya Lawes was sentenced to two years in prison as part of a plea deal. Lawes, who was previously charged with murder, received the sentence after pleading guilty to causing grievous harm to Mackey during the fatal January 25 incident.

The time Lawes spent on remand up to that point, a year and some four months, was be factored into her prison sentence. She was also ordered to perform community service and undergo counselling inclusive of anger management classes.

Then, on August 29th of last year, the woman who actually owned the phone at the heart of the controversy, and whose named has been withheld because she too was charged as a minor, was freed from prison.

At the time, Justice Grant-Thompson sentenced the woman, who is either 18 or 19-years-old, to two years in prison pursuant to a plea agreement she reached with the Crown. The sentence was ordered to run from the date of her incarceration, January 25, 2018. However, because prison terms are not calculated on a full calendar year, her time expired on May 25 of this year.

Prior to being sentenced/released, the woman, who turned 18 on August 21, pleaded not guilty to murder, but guilty to causing grievous harm.