Stateside: Time For Biden To Call Out Trump? 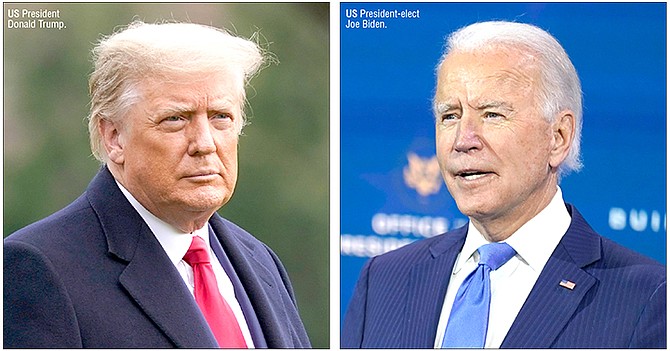 A Canadian friend was commenting the other day about the goings-on in Washington, DC, just three weeks before Joe Biden will be sworn in as America’s new president and Donald Trump will grudgingly depart the White House.

“What utter childishness!” he exclaimed. “I know that politicians all over the world often behave badly. But this circus around Trump being such a stupendously sore loser and Biden being so slow to rise to the bait… It’s just about the craziest scene I have ever observed.”

People all over the US are being forced to conjure the image of Trump sitting in the White House – when he’s not out playing golf – plotting everything from baseless Supreme Court challenges to military coups to suing his own vice president to force Mike Pence to disallow Senate ratification of the November electoral college results.

It does rather defy imagination.

But in contrast, in order to be acting presidential, Biden has responded rather passively.

He is methodically completing the complicated process of assembling his new cabinet and occasionally hosting masked press availabilities.

That’s fine. He should be doing that.

Biden knows he is playing a potentially losing hand with Congress, since his Democratic Party’s working majority in the House of Representatives was significantly reduced in November’s election and few are projecting a Democratic sweep in Georgia’s two Senate runoff elections coming up on Tuesday.

If the Dems don’t win both races, the Republicans will still control the Senate.

So Biden will have to carefully navigate numerous land mines littering the landscape on Capitol Hill to get anything done once he is sworn in as president And the specter looms of a political beating for him in the 2022 congressional by-elections.

That’s what happened to both Barack Obama and Trump in the first election after they won the presidency.

It’s understandable that Biden is pushing a conciliatory line toward the GOP and its scores of national and local elected officials who are clearly afraid of the awesome vengeance of a president Donald Trump if he believes they have displayed insufficient allegiance to him.

But seriously. Wouldn’t it be satisfying if Biden stopped modulating himself and called out Trump for his almost inconceivably childish, truculent behaviour?

It would give great heart and encouragement to the 81 million American voters who gave him his victory on November 3.

And considering that Trump is at his core basically a schoolyard bully, how better to quiet him than to forcefully stand up to him? It might be worth a try.

Washington and Georgia set for fireworks

Next week promises more fireworks, both in Washington and in Georgia. The Senate runoff election is set for Tuesday in the Peach State, with incumbents Kelly Loeffler and David Perdue facing Democratic challengers.

Loeffler, who was appointed to her seat by the Georgia governor just a year ago, is competing in a Senate election for the first time. She is fairly easy to stereotype as just another wealthy plutocrat living in her enormous Atlanta mansion counting her and her husband’s wealth.

Her opponent in this WWE-style tag team grudge match is the Rev. Raphael Warnock, who holds the senior pastor’s position at Martin Luther King’s world-famous Ebenezer Baptist Church in Atlanta. Warnock and his tag-team partner, entrepreneur Jon Ossoff, are both the grateful beneficiaries of the phenomenal voter registration success orchestrated in Georgia for the past two years by former state senate minority leader Stacey Abrams.

Ossoff, who is 33 years old and white but had a close professional relationship with Georgia civil rights icon John Lewis, has broken fundraising records for a Senate race. But despite his entrepreneurial success and rapid political rise, Ossoff is a clear underdog.

Ossoff’s opponent is 71-year-old David Perdue, an incumbent seeking his second Senate term. Perdue has a resume reminiscent of Mitt Romney’s private sector prowess as a management consultant and “corporate turnaround” specialist. He was a vice president at Reebok and CEO of the vast network of Dollar General stores.

Both Loeffler and Perdue are trying to walk a tightrope erected and now being jiggled by Trump as he stews in the White House.

Fearful of alienating Trump’s many loyal Georgia followers, these Republicans have aligned themselves with Trump’s calls for the resignation of the Republican governor of Georgia and its Republican secretary of state, whose sin was failing to overturn the November election results which gave Georgia’s 16 electoral votes to a Democrat for the first time since 1992.

The Republican incumbents are also both dogged by charges that they profited by insider trading in the early days of the COVID-19 pandemic.

The polls are inconclusive. So what else is new? The polls have muffed the last two national elections, and the big national pollsters don’t generally pay too much attention to state races. While there is a lot of publicity around these Georgia races, to predict Tuesday’s outcome with certainty would be foolish.

As Georgians are bombarded with unprecedented waves of advertising from all candidates, though, they must certainly be ready for this latest election to be concluded.

In Washington on Wednesday next week, Congress will meet in joint session to count the electoral votes. The Vice President, as President of the Senate, is the presiding officer. Tellers open, present, and record the votes of the States in alphabetical order.

Trump allies in the House of Representatives are posturing about a “big” protest during this largely ceremonial occasion. Maybe they will disrupt the proceedings and further embarrass the country. Hopefully not.

A sign that the GOP can move past this president is House Republican Liz Cheney’s acknowledgement that Joe Biden will indeed be the next American president.

Cheney, daughter of the former vice president, third ranking Republican in the House and a present and future force in her party, said in November that “if the President cannot prove these fraud claims or demonstrate that they would change the election result, he should fulfill his oath to preserve, protect and defend the Constitution of the United States by respecting the sanctity of our electoral process.”

Cheney has stuck to her guns this month, and even Senate majority leader Mitch McConnell has urged Trump and his rapid supporters not to disgrace Wednesday’s ceremony by mounting pointless protests.

It will be interesting to see what next week brings.

As Republicans writhe and struggle with Trump’s behaviour, there is speculation that what began with the Lincoln Project may lead further.

Lincoln was the brainchild of a group of establishment conservative Republicans who watched Trump’s scandalous conduct and betrayal of many traditional conservative values and mounted a well-funded effort to help depose him.

Lincoln Project attack ads against the president were among the most potent in November’s election campaign.

Yet it is clear that even after his defeat, Trump commands loyalty from millions of Republicans. This has the Lincoln conservatives worried, to the point that they are reportedly considering forming an independent party that would threaten the traditional Democrat-Republican party duopoly in American politics.

A Lincoln strategist recently told the New York Times that “there is still no home in the GOP for Republicans committed to representative government, truth and the rule of law, nor is one likely to emerge anytime soon. What’s next for Republicans who reject their party’s attempts to incinerate the Constitution in the service of one man’s authoritarian power grabs?

“The answer is that we must further develop an intellectual and political home, for now, outside of any party.

“From there, we can continue working with other Americans to defeat Mr. Trump’s heirs, help offer unifying leadership to the country and, if the Republican Party continues on its current path, launch our own party to challenge it directly.”

While third parties have significantly impacted American national elections from time to time, this has proven to be the exception rather than the rule.

But the continuing challenge to Trump and his party control does present interesting possibilities for the months and years ahead.

And as Republican leaders grapple with this internal fractiousness, they may be heartened to watch Joe Biden try to tame an aggressive, popular wing in the Democratic Party epitomized by Senator Bernie Sanders and Representative Alexandria Ocasio-Cortez. These progressives aren’t known for their patience.

We can probably expect lots of infighting in both parties in 2021. Happy New Year!

What is this drivel? If you think this is business as usual in the U.S., you're a fool that watches way too much mainstream media. You think if Trump leaves office "MAGA" is going away? Something like 80% of Trump's 75 million voters believe this election was stolen, faith in the election process is permanently damaged. The divide is greater than it ever has been. Trump voters aren't going to support Biden as President or Kamala, ever. So how is the country supposed to come together? Do not be surprised if a Civil War breaks out in the US in the near future.

Amazing. 70 million Americans dumb enough to believe a pathological liar when he says the election was stolen... The US has a severe moron problem. Scary....

Amazing. 70 million Americans dumb enough to believe a pathological liar when he says the election was stolen...

Well that's what happens when you have election rules so loose that even dead people end up casting votes. Then refuse to have ballot audits or even check signatures. People lose faith in the process. The real question is why are the requirements to vote in the US even looser than in the Bahamas where we must have a voter's card, confirm citizenship and have our thumb dipped in ink. In some US swing states an illegal alien can find a mail-in ballot, fill it out, throw it in the mail box and it's counted as a vote and of course they'll be voting for Biden who promises to make them legal and give them free money. The virus was used as an excuse to send out more mail-in ballots than ever before. Some states ruled that the signatures don't even have to match, their elections are a complete joke and it's completely understandable for conservatives to have no faith in the results. Especially with all the statistical anomalies in the 2020 election.

Well if a civil war does break out that's probably the best way to shut them dumb trumpies up. Lol. One thing is certain, trumpies are too dumb to win. Lol...

Yeah right... wouldn't count on that. Who exactly do you think will be fighting for the corrupt senile husk Biden, Kamel Toe and the criminal Democrats? The US military? You think that ghoul has any real populist support besides the lying media establishment? Have you ever seen a Trump rally vs a Biden rally? lol maybe the BLM and Antifa rejects and rioters will help? Maybe the media talking heads at MSNBC and CNN like Don Lemon will go out there and fight for Biden? The US military is filled with Trump supporters, many of them used to fly Trump flags on US military vehicles and convoys until it was condemned, even the elite US Navy SEALs. But if you listen to the MSM you'll think the military hates Trump, maybe some of the corrupt Generals, but that's it. Reality is the majority of military veterans and the largest militias like the Oath Keepers and III Percenters are all pro-Trump and preparing for a conflict. You don't have a clue.