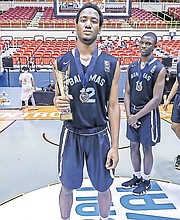 ROMAD Dean’s finish to his debut season with the Crestwood Prep Lions in Ontario, Canada, saw his continued ascension in the prep basketball recruiting rankings to earn The Tribune’s 2020 Junior Male Athlete of the Year.

When the calendar flipped to 2020, Dean concluded the second half of the Ontario Scholastic Basketball Association season with a series of dominant performances for the Lions.

The 17-year-old, 6’7” forward averaged 15.3 points and 12.4 rebounds per game during the final stretch of the regular season which included double doubles in six of seven games.

He concluded the Lions’ playoff run with 26 points and 18 rebounds in a 94-80 loss in the OSBA quarterfinals. He shot 10-12 from the field and 3-4 from three-point range.

He was also nominated for Canada’s premier prep basketball showcase as one of 198 players named to the BioSteel All Canadian Games - 2020 Boys Nominees List.

On the season, Dean averaged 14.1 points, 13.6 rebounds and 1.3 blocks per game. He led the team in both rebounds and blocks but is looking to diversify his game once play can resume.

“I was basically playing the role in the first year as the only ‘big’ on the team but I knew I had to strengthen my perimeter game and athleticism,” he told the Hip Hop Hoops podcast.

“I worked out with Galaxy Training. It was mostly me working on my confidence, my weakest part of my game was my ball-handling and I had to work on my jumper.”

Arthur did not compete in 2020 but became the latest Bahamian prospect to join the Miami Marlins farm system and sign a professional baseball minor league contract.

The Marlins signed the 17-year-old 6’5” 185- pound outfielder out of the International Elite Sports Academy on October 14, the final day of the 2019- 20 International Signing Period.

The International Signing Period traditionally runs from July 2 through June 15 of the following year, but Major League Baseball made an extension of an additional four months due to the fallout from the COVID-19 pandemic which readjusted the league’s schedule.

Arthur joins current major leaguer Jasrado “Jazz” Chisholm and minor league prospect Ian Lewis in the Marlins organisation. He also became the fifth Bahamian signed during the current period following Lewis, Everett Cooper (Houston Astros), Dax Stubbs (Baltimore Orioles) and Zion Bannister (Texas Rangers). Arthur was the latest of more than a dozen Marlins prospects signed during the current signing period. He was the second prospect signed by the team since the end of the regular season on October 8.

Strachan emerged as a star on the gridiron for the John Caroll Catholic High Golden Rams in Fort Pierce, Florida.

For his breakout junior season, the 16-year-old 6’4” wide receiver finished with a team-leading 33 receptions for 633 yards and eight touchdowns. His yardage and touchdown totals were second on the team. He averaged 18.6 yards per catch and 57.5 receiving yards per game.

The Golden Rams advanced to the Class 3A Regional Final of the Florida High School Athletic Association playoffs and finished the season 9-2.

Strachan had key contributions in both playoff wins. He finished with four receptions for 62 yards and one touchdown in a 33-27 win over First Academy in the opening round and followed with three catches for 75 yards, including a 27-yard touchdown in a 48-13 win over the Holy Trinity Tigers in the semifinals.

For his season, Strachan earned an invitation to the Georgia versus Florida High School Showcase, January 16-18, 2021 at Feltrim Sport Village in Orlando, Florida.

He played sparingly as a sophomore but the Rams were high on his prospective impact headed into this season. His strong start to the season began on opening night when he finished with three catches for 66 yards and two touchdowns on September 11 against Port St Lucie.

On the recruiting trail thus far, Strachan has received an offer from the Charleston Golden Eagles and has also drawn interest from the Coastal Carolina Chanticleers.