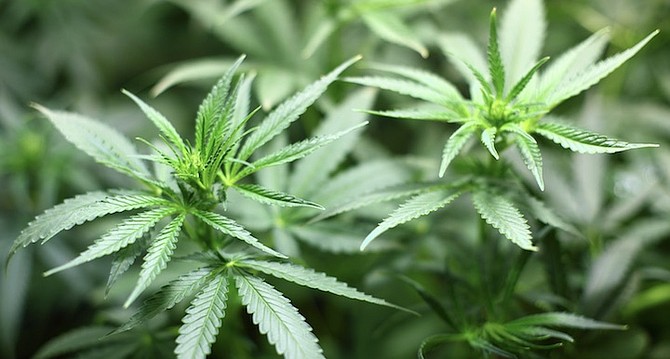 It actually could be a blueprint of sorts for what we are trying to accomplish, possibly speeding up the process from its current snail’s pace and is yet another reason for The Bahamas to seriously look at the numerous benefits of the decriminalisation and legalisation of medicinal and recreational marijuana.

In addition to the potential lucrative revenue stream generated from industry taxes on medicinal and recreational users, locals and tourists alike and it can easily put the Bahamas firmly back in the tourism game, before the world passes us completely by.

Last Friday in the United States, the House passed, 228-164, a standalone bill to decriminalise marijuana for the first time since President Richard Nixon imposed severe penalties during his “war on drugs” fifty years ago.

Sadly the bill is highly unlikely to become law as it has to survive a Republican controlled Senate.

(The FNM shouldn’t have that problem with a four-member opposition).

However, the vote is a powerful, symbolic victory nonetheless, for those who oppose a “tough-on-crime” approach to the popular drug that has led to the imprisonment of millions of Americans, disproportionately black and latino men in particular.

The bill would remove marijuana from the schedule of illegal drugs established under the 1970 Controlled Substances Act, where it remains classified as a highly dangerous drug without health benefits, despite ongoing research about its medicinal potential and a tide of state legalization measures.

The new bill is meant to end the tension between increasingly liberal state policies and the federal restrictions.

All but three states have loosened marijuana laws to some degree, according to the Congressional Research Service.

Congress has used its annual budget to prohibit funding the pursuit of those acting within state medical marijuana laws, but there are exceptions, and recreational users enjoyed no such protection under the Trump administration’s Department of Justice.

Under the law, most people with federal marijuana convictions would have their records expunged, while people convicted of crimes in tandem with marijuana-related offences could be resentenced.

The Bill would also prohibit the government from biasing business loans, decisions on immigration status, or aid based on marijuana use or a marijuana offence.

Federal agencies could still drug test job applicants, but couldn’t deny anyone a security clearance based on marijuana use.

The grant programmes would be overseen by a new office at the Department of Justice.

According to a recent survey by YouGov.com found that 70 percent of of those polled said “yes” when asked if they support or oppose expunging marijuana-related convictions for non-violent offenders.

A paltry 17 percent said they oppose the idea.

While 81 percent of Democrats said they either strongly or somewhat support the idea, while a majority of Republicans — 57 percent — saying the same.

The global pandemic may be a blessing in disguise when it comes to “marijuana tourism”.

It allows more time for The Bahamas to formulate an effective operational plan that can be implemented rapidly, allowing The Bahamas to become major players in the game.

The Bahamas can effectively enhance our tourism product, with new and innovative attractions and related promotions for potential visitors and opportunities for Bahamians to earn a living in the industry.

If not, we will have let another multi-million dollar opportunity go up in smoke!

All while Jamaica our biggest competition in the market is stuck spinning its wheels in the “marijuana tourism” mud – thanks to the pandemic.

No time for ‘politickin’ on this one ‘Doc’ hurry up and pass it... the legislation that is!

No matter how hard I try I still can’t get PLP Leader Mr Philip “Brave” Davis’ comments regarding “environmentally friendly” oil drilling out of my head and I can’t stop laughing either.

As a comedian it inspired me, I had to find out where “Brave’s” statement landed among the best oxymorons of all time.

There were tons of submissions to sift through and the majority were hilarious, this process also allowed me to put together a top ten list of my own.

Feel free to share yours with me, send them to : naughty@tribunemedia.net

Such a pretty plant! LEGALIZE IT!!

First, stop arresting people and penalizing them. That's a start. The judges and cops who feel it is still necessary to arrest people and fine them for pot should see the light first. They manage to turn their heads from the many, many other law breaking activities in this country. Are they stuck in last century. The story above, which we are not allowed to comment on, of a man arrested and fined for marijuana is a case in point. "In response, Magistrate Ferguson-Pratt told Maycock she hoped the fact that he had to travel from Eleuthera to the capital to appear in court served as a “wake up call” for him. As a result, she fined the defendant $750 or three months in prison. I ask myself if it is the judge who needs the wake-up call. When people remain in places of power for too long they start believing in their own importance and infallibility.