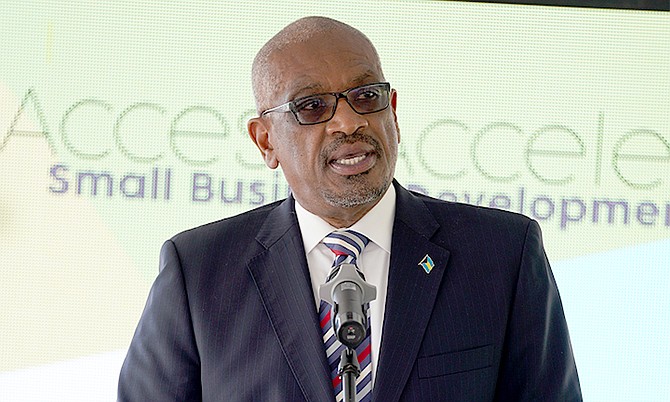 THIS week, the Prime Minister made it clear that the Ministry of Finance is a hot potato he will not get stuck holding, a rag-tag band of activists outsmarted parliamentarians, and the PLP looks as hapless as ever.

With the recent resignation of Deputy Prime Minister and Minister of Finance K. Peter Turnquest, an opening appeared arguably in the most prominent position in government outside of 'Head of Government.'

As it goes with these things and sticking to his “I'ne into dat!” stance the Prime Minister takes when it comes to heading ministries – he immediately informed the public that he is indeed not into that.

He is Acting Minister of Finance, but don't hold your breath that he will hold onto that sticky wicket for long.

"I will announce very soon...what I can say is that I most certainly won't remain in the ministry of finance, I can say that with certainty...I will meditate and discuss with some of my colleagues, and by the time I come back sometime this week, we will have to make announcements moving forward," Prime Minister Dr. Hubert Minnis said.

Ah yes, the age-old Bahamian process of decision making, better known as 'lemme pray on dat,' seems to be the direction ‘Doc’ is taking us at this time. He knows that we know that he knows he has no idea how to manage finance. It is now officially open season for the most wide-eyed, nakedly power-hungry of his Cabinet ministers to start lobbying for that position.

I know the newly minted Minister of Health, Renward Wells, is kicking himself for taking the Health position seeing as an even juicier one has presented itself just months later. Not that timing will stop him from concocting a grotesque way to use his stellar collegiate athletic skills to leapfrog lifelong FNMs to get what he wants.

But he has some serious competition.

When it comes to 'All the Prime Minister's Men,' ministers Frankie Campbell, Marvin Dames, Elsworth Johnson, Jeff Lloyd, and Darren Henfield are also standouts for sucking up to Numero Uno – the Prime Minister.

So who will win Survivor: Minnis Cabinet?

Only time will tell.

If the Prime Minister were shrewd, he would leave that position open until the Free National Movement (FNM) goes to convention. Having a 'deputy prime minister' right now is not only unnecessary; it's not even in the constitution.

My advice? Let them fight it out.

Yes, for the next sixteen months or so. Name a minister of finance but leave the deputy slot vacant. If we're honest, not only is the Prime Minister losing ministers like a gambler loses money in a numbers house, he could also do with lighting a fire under his current ministers to perform better leading up to the next general election.

Two Can Play That Game

Speaking of games of chance, it was quite a sight to see the selfsame FNM MPs who are angling for promotion get outsmarted by a group of activists who could barely overcome their infighting long enough to execute their Machiavellian plans.

Prominent in the names of activists were Lincoln Bain, Adrian Francis, and members of parliament Reece Chipman, Frederick McAlpine, and Vaughn Miller.

The group, it seems, at some point or other, designed a plan to have a repeal bill tabled in our good old House of Assembly that focused on the country's aragonite industry.

Mr. McAlpine, an FNM ‘prodigal son,' introduced the Bill. Mr. Chipman declined to second it (allegedly because he had not read it), and ultimately former FNM turned floor-crosser PLP Vaughn Miller was the one to endorse it.

The drama in the House over whether McAlpine properly introduced the Bill brought harsh words from all involved (who were awake) during the brawl. Halston Moultrie, our current Speaker of the House, got the chance to exact his pound of flesh and many pints of blood from the executive branch, which has proven the bane of his existence these past few months.

Moultrie allowed the Bill to be read and tabled over the objections of slow-to-rise FNM ministers like Wells and Dames. It was an embarrassment for the governing party. It was the kind of humiliation that will only get overshadowed if the full FNM caucus votes down the repeal Bill.

I'm only a layman, but I can tell you voting against a bill that promises elusive 'millions' in sovereign wealth fund cheques to all Bahamians will not a winning campaign make.

Wells, Dames, and Company got played. And now the Prime Minister, who was absent at the time, is in a tough spot.

They really should have given Moultrie those toilets he has been complaining over. Perhaps he would have flushed something other than the deputy prime ministerial hopes of those present down the drain.

Where Ya Put Me

The Progressive Liberal Party (PLP) truly does need to get its act together. When the party should be presenting its candidates for the next general election and shoring up its message, instead, we have oxymoronic statements, griping about campaigning, and infighting.

Right now, at a time when Bahamians are mounting the most organized fight against oil drilling in our waters to date, Opposition Leader Philip 'Brave' Davis thought it wise to volunteer his support for "environmentally friendly" oil drilling.

To the ears of many Bahamians, this is the equivalent of saying you approve of 'humane' pot cake slaughtering. Or 'compassionate' sea-bed butchering. In other words, it makes no sense.

On top of that, we have PLP Chairman Fred Mitchell running around like a lost puppy barking about how the Prime Minister is 'campaigning' during emergency orders. He griped about Doc going to 'PLP constituencies,' as if a prime minister isn't prime minister for the whole country.

Wasn't 'Flyin' Fred's' boss, Mr. Davis, at an alleged 'super-spreader' event in Freeport during this pandemic?

There are, at last count, zero 'PLP constituencies' in Grand Bahama. If everyone played by Mitchell's rules, most PLP MPs wouldn't be allowed to step foot out their doors, seeing that they hold a measly five of thirty-nine seats in the House. And most don't even live in their constituencies.

Perhaps the PLP chairman would do better to quell the infighting and backbiting in his party that is bubbling to the forefront of media attention. To hear some tell it, it's worse than Game of Thrones in some constituencies, with aspirants plotting and backstabbing to get that delicious nomination nod.

The most telling part of how feckless the PLP is these days in its role as Official Opposition is the fact that a rag-tag, infighting band of activists accomplished more in the way of legislation this week than the PLP has in the past few years.

As the saying goes, 'ain't that a kick in the head?'