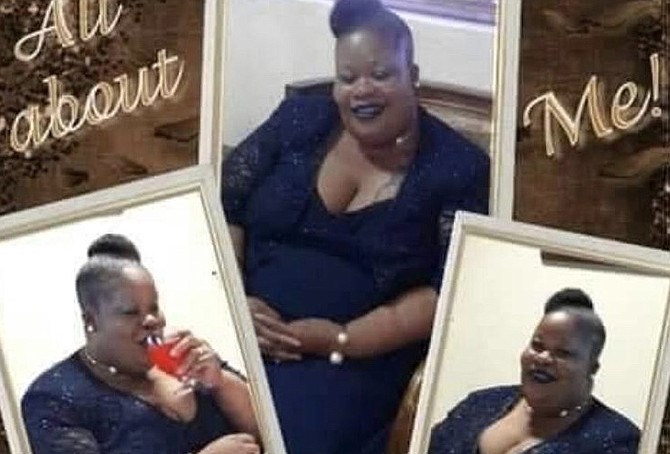 NURSE Bernadette Rolle left a heartbreaking message describing her ordeal as she fought COVID-19 in a clinic.

A voice note she sent to loved ones detailing her deteriorating health circulated on social media over the weekend and captured the fears she had for herself and her family.

Instead, she died on Friday, one of ten people whose death from COVID-19 was confirmed in the last week, according to information provided up to press time.

In the recording, Nurse Rolle said the difficulty she felt breathing and eating was “scary”, likening her battle with COVID-19 to a rollercoaster ride.

The mother-of-two worked at the Sandilands Rehabilitation Centre and was being treated at the South Beach Clinic when she died.

She said in the audio that another nurse prayed with her and reminded her that she had to fight for her children.

“I know that, I know that,” she said, “it’s just like a roller coaster, one thing everything smooth, then the next minute it’s just oh my God.”

In a statement, the Public Hospitals Authority said Nurse Rolle worked with the PHA for about 14 years. “Nurse Rolle worked across various wards at the Sandilands Rehabilitation Centre,” the PHA said. “SRC Hospital Administrator Mary Lightbourne-Walker described the loss as one that is a blow to the Sandilands family. She convened an emergency meeting this morning to advise staff at SRC of Nurse Rolle’s passing and to address any concerns they may have in her capacity as hospital administrator.”

Health Minister Renward Wells also released a statement, saying: “Nurse Rolle was dedicated to her family, to her patients, and to the institutions of nursing and SRC.”

Bahamas Nurses Union President Amancha Williams said in an interview with Eyewitness News that Nurse Rolle was allegedly turned away from Princess Margaret Hospital twice when she sought treatment.

However a hospital source told The Tribune the nurse refused to be admitted on two different occasions. Prime Minister Dr Hubert Minnis is expected to discuss the nurse during his national address this evening.

In a statement, Progressive Liberal Party Chairman Fred Mitchell called on Dr Minnis and Mr Wells to ensure nurses are not turned away from the hospital and that their overtime is paid.

“Nurse Rolle symbolises the value, courage and inherent risks associated with being on the frontline of this pandemic fight,” Mr Mitchell said. “We call on the government to do more to protect the health and ensure the safety of our gland frontline workers. The prime minister must sit as a matter of urgency with the nurse’s union and arrest this rapidly deteriorating labour impasse by resolving all outstanding issues in the public’s interest before more lives are lost.”

Earlier this month health officials confirmed that 23 people on the Male Ward at SRC tested positive for COVID-19 after a staff member who worked across three wards of the institution tested positive.

Of the patients testing positive, six presented with symptoms and another 17 were asymptomatic, officials said in a statement at the time.

None of us can even begin to imagine the horrific suffering this poor woman went through prior to her passing.

And you simple idiotic Bahamians still want the economy to open up because we have to "learn to live with it" and because "the cure cannot be worse than the disease" and all that nonsense. Pray tell me, what cure is worse than this woman's death. Idiotic, simple, dumb Bahamians.

So what do you suggest? Stay locked inside living in fear forever? There has to be a balance to everything because in all honesty we must learn to live with it safely like any other virus, pathogen or disease that exist in the world today

So who are you willing to sacrifice Amused? Your parents? Siblings? Cousins? And who said anything about forever? The only effective way to slow the spread is lockdowns and wearing masks. Of course it won't be permanent. And if Bahamians would WEAR THEIR MASKS PROPERLY we'd see the reduction start alot faster...

Ok, do you care to sacrifice your mother, kids or wife for the cause? GTFOH, simpleton Dont have time for your trash today.

Only asked what do you suggest and you get your panties in a bunch. Seriously some of you make me laugh. Smh, carry on smartly

In the meantime, The Colony's education minister and his officials are scheduled to appear on media-friendly local talkie shows like The Revolution, and Z-Live - asking parents to cast aside any fears they have and prep school supplies and uniforms march their children out the front door into waiting assuring arms Jeff and his officials - returning back to school in September when Comrade Jeff has with 100% safe certainty scheduled schools classes to restart. Just couldn't make this stuff up. Just couldn't. Nod Once for Yeah, Twice for No?

If he lock it down there will be a rebellion.. from what I saw when he announced the last one in 24 hours all hell was breaking loose, well Nassau anyway. IF he open it, all hell will break loose... so what do you do? The NIB rations are running out. God help us, no matter what he decides tonight

no there wont be. Most Bahamians who actually understand the need for the lockdown will capitulate. The other D- idiots may take to the streets, where I hope Commissioner Rolle and his boys will be waiting in droves to drag those miscreants to prison.