They Ran Breanna Down Like Animals: Sister Tells Court How Gang Stabbed Teen Over $80 Cellphone 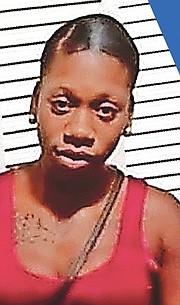 THE older sister of teenage mother Breanna Mackey tearfully recounted yesterday how five girls who were supposed to be her sister’s friends ran her down “like a dog” in the street and brutally mobbed her over an $80 smartphone last year.

Her face awash with tears as she recounted “the worst day of my life”, Nafetera Brown testified how five of her sister’s friends, all “armed with something”, chased the 19-year-old “like animals” because they wanted her to pay for a broken Huawei cellphone.

Ms Brown said she could only “stand there in shock” as five of the girls pummeled Mackey about her body, and then as Mackey scrambled to a nearby apartment complex and collapsed from the multiple stab wounds she sustained to her upper back and right arm.

“She was just crying,” Ms Brown said tearfully. “When I told my little sister to run, they run her down like a dog, like animals. That’s what they did to her. She ran, and that still wasn’t good enough.”

Ms Brown said the savagery came just moments after a car driven by one of the girls sped after Mackey and almost knocked the teenager down when it cut across her in a bid to prevent her from fleeing the impending attack.

That act by the driver proved to be the determining factor in Mackey’s death, according to Ms Brown, as she said the victim stood a good chance of escaping otherwise.

“I strongly feel and I know that if it was not for that car, Breanna would have gotten away,” Ms Brown said. “Because it frightened her and made her fall down when they gone to knock her down.”

The testimony came during Dervinique Edwards’ and Zaria Burrows’ trial before Justice Cheryl Grant-Thompson over allegations they murdered Mackey on January 25, 2018.

According to reports from police, shortly before 6pm on the date in question, police control room was contacted about reports that a female was stabbed about the body in the Key West Street area off Cordeaux Avenue. Police officers were dispatched to investigate.

Upon their arrival, a woman who was identified as the victim’s sister, Latisha Woodside, directed officers to a brown and white apartment complex on the eastern side of Key West Street. On the porch, just in front of door number nine, officers discovered Mackey, semi-conscious, lying face down and suffering from four stab wounds to the upper back and two stab wounds to the right arm.

Mackey, who had turned 19 the day prior, was subsequently transported to Princess Margaret Hospital where she died around 8.28pm.

Taking the witness stand yesterday, Ms Brown said at around 6pm on the date in question, she and Mackey went for a walk. According to Ms Brown, Mackey wanted to deliver a piece of cake to her friend not too far from where Mackey lived in their mother’s house on Palm Beach Street.

Ms Brown said as they were walking, a car pulled up with a group of girls inside, who were all “rowing and carrying on” over the money Mackey apparently owed one of them for the damaged cellphone. According to Ms Brown, all of the girls were here sister’s friends. She said she had seen all of them a few times prior to the incident in question.

Ms Brown said as the girls got out of the car and approached them, she got defensive and tried to verbally deter them from going after her sister. However, she said one of the girls, Thea Williams, pointed a knife to her face and said: “Miss, move. If you know what’s good for yourself, move.”

“Everybody was running towards us…I was telling them ‘ya’ll leave my sister alone’ and I say ‘Bre, run,’” Ms Brown said. “And as she ran, I run to go behind her and I keep saying ‘Bre come back to me.’

Ms Brown said while the mayhem was going on, she was on the phone with her other sister. After the girls had finished mobbing Mackey, they all jumped back into the car and sped away towards Cordeaux Avenue off Key West Street.

Ms Brown said after the incident, she ran back to their house and returned shortly afterwards with Ms Woodside.

Ms Woodside, when she took the witness stand, tearfully recounted how when she arrived at the apartment complex, her younger sister was laying on her side with “her eyes turn over white and her mouth open.” Afterwards, she said she contacted the ambulance from her phone.

Ms Woodside said the attack on her sister was weeks in the making up to that point, and would have likely happened to some degree two weeks prior had her sister been home when the gang of girls showed up at their mother’s house.

Ms Woodside said on that occasion, a “dyke looking” girl — whom she later said was Burrows — Williams, Davanya Lawes, and another girl named Matia showed up and were “carrying on” and “making noise” about the money for the phone.

But then there was an occasion when Mackey was at home and the girls showed up, Ms Woodside said. She explained that on that occasion, things escalated to a “conflict” where “everybody was rowing”. Then, at one point, the group of girls went to the car and retrieved “knives and screwdrivers”.

At that point, Ms Woodside said she held Mackey to her side and her nephew back and adamantly told the girls to “leave our yard”, which they did.

Meanwhile, Constable Phillipian Brown, who was attached to the Grove Police Station, testified how later in the evening on the date in question, he and other officers, acting on information, went to Morris Guest House on Davis Street in the Chippingham area. He said they spoke with the proprietor and, after receiving certain information, obtained a key to one of the rooms.

P/C Brown said when they got to the room, they entered and met two males, whom he said were “quickly subdued”. Based on the information those two males give the officers, P/C Brown said he then proceeded to search the bathroom.

The bathroom door was locked, P/C Brown said, so he had to kick the door in to gain access. Once inside, he met five females huddled closely together in the tub, one of whom was Edwards. In response to a question from defence attorney Devard Francis, P/C Brown said he did not see Burrows during that incident, and neither did he arrest her.

Nonetheless, he said the five girls were cautioned and arrested in reference to a murder investigation, and were transported to the Nassau Street Police Station.